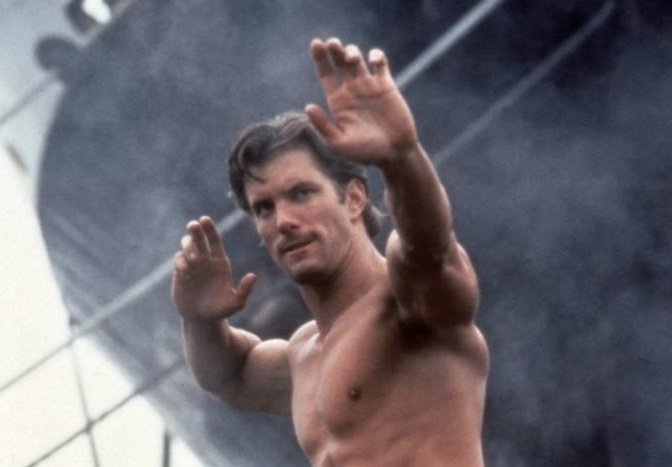 When I first heard there was a sequel to the Dolph Lundgren classic ‘Red Scorpion’, I was kind of excited. I had foreseen a whole lot of potential plotlines for example, Nikolai settles in the West, only for the ominous Reds to come by his door, seeking revenge for his betrayal of the Soviet Union? Or Nikolai has to do ‘one last job’ for the American government, in another exotic country, an Asian one now, perhaps? Nope.

‘Red Scorpion 2’ is more of a ‘Dirty Dozen’ rip-off, than a sequel to ‘Red Scorpion’, which is already a knock-off of ‘Rambo’, albeit an incredibly entertaining one at that. My assumptions in regards to the plot proved to be completely wrong. The plot of the movie is that there is a surge of Neo-Nazi attacks in the U.S.A., with vicious and supposedly charismatic Andrew Kendrick (John Savage) leading the movement in an effort to exterminate their opponents and take over the country. The heroes get to call the baddies ‘eggs with legs’ with so much pathos, as if it really was a cool insult.

In order to give his paramilitaries a symbol to rally to and boost his personal popularity, Kendrick has the Lance of Longinus stolen. Kendrick wears black leather gloves almost in every scene, which is supposed to indicate he is definitely the movie’s villain. The only ones who can stop him are a bunch of lone wolf badasses, who have to learn to work in a team together and overcome all of their personal difficulties. The crew includes a sharpshooting cowboy Bill (Michael Covert), tough Detroit ex-cop Winston (Real Andrews), a wannabe Casanova hacker Vince (Paul-Ben Victor), and Asian-American martial artist Joe (Tong Lung).

This ragtag bunch of deadly misfits is lead by a super-agent Nick Stone (Matt McColm), who is our main character. He is so clean-cut that I want to give him a white hat, so that he would be a carbon copy of every tough 50’s cowboy stereotype. Another addition to the good guys crew is Jennifer Rubin who stars as a feminine, yet tough second-in command to Stone. Their boss is Colonel West, played by Michael Ironside, who is so criminally underused in this movie that it hurts. On the bad guys team we have my personal favorite Vladimir Kulich as a villainous henchman, who is the only credible threat to the hero. As is the case with Ironside, he could have been used better and more profoundly.

Since the government has no hard evidence against Kendrick and his organization, West has Stone and his partners destroy the Neo-Nazi threat. We all know, how action movies end so there are no major surprises. What matters, is just how much of the ride is an entertaining one, and this time it’s not. The movie has its share of explosions and some of the fighting scenes are filmed OK, but McColm just doesn’t have the charisma and Savage goes so over-the-top with his Klaus Kinski cosplay it ain’t even funny.

Matt McColm’s super-agent Nick Stone has virtually no connection to Rachenko or any events of the first movie. For all I know, there is a better chance he is somehow related to Brian Bosworth’s undercover identity in ‘Stone Cold’. The film does try to connect with its predecessor, albeit that is an incredibly lame effort. Colonel West brings in an ex-Soviet KGB badass (George Touliatos) to train Nick’s squad for the upcoming mission.

American Special Forces have their own share of retired cool old guys – perhaps, an entire separate unit of them – but the movie had to try to show that it’s related to Dolph’s hit. Said ex-Soviet officer claims he was training Russian soldiers for ‘Red Scorpion Brigade’ and mentions Nikolai as his last and most promising student. As for the events of the sequel, the brigade is disbanded. Nick and his squad mates get ‘Red Scorpion’ tattoos on their forearms, being unable to pass on a chance to demonstrate their muscles. After that, the symbol is never mentioned again. Still, remembering that Nikolai only got the tattoo after going native and fitting in with the Bushmen. Hence, this whole premise with the legendary Soviet unit goes completely against the lore of the first movie.

I mean, McColm doesn’t even have any funny one-liners. It’s the nineties, for God’s sake; you can’t just shatter bones and shoot the bad guys without saying something dumb and witty at the same time. How dare you, Matt McColm, to give us an action movie deprived of the genre’s most important tradition. I really believe that ‘Red Scorpion 2’ would have been far more entertaining, had it included McColm saying something like ‘Gotta crack a few eggheads to complete a mission’ after cracking someone’s skull. It’s not like I am being ridiculous, it’s that this is what is expected when you make a 90’s action movie.

All in all, the reason many of us enjoyed the first movie was not only because Dolph is cool, but also because it had a heart. ‘Red Scorpion’ is a story of a Soviet death machine, who finally manages to get free and differentiate right from wrong on his own. This is film’s main theme and it resonates with us. Besides, Walsh works as a comic relief character. And we get to see Lundgren drunkenly chanting the Soviet anthem. While already hilarious, it’s so much more fun, when you’re Russian yourself. Believe me.

Alas, in the sequel the only jokes in the film are half-hearted attempts from the characters to have some casual dialogue with them exchanging playful insults. The theme of the sequel is that you only get to win when you and your allies work together, like a proper team. If an overlong final battle was somehow cut, ‘Red Scorpion 2’ could have been your standard 90’s TV pilot and I’m not completely sure the series would’ve lasted past that point.

On a final note, I have to say, that we could have had a decent sequel with Vladimir Kulich playing another Russian soldier or Nikolai’s brother or something, going up against an evil and sadistic bad guy played by Michael Ironside. Speaking of which, I like this idea so much, I’m off to start writing my script for ‘Red Scorpion 3’ and pitch it to Avi Lerner. With the 80’s nostalgia booming, I reckon, this idea stands a chance of success. Until the next time, folks.