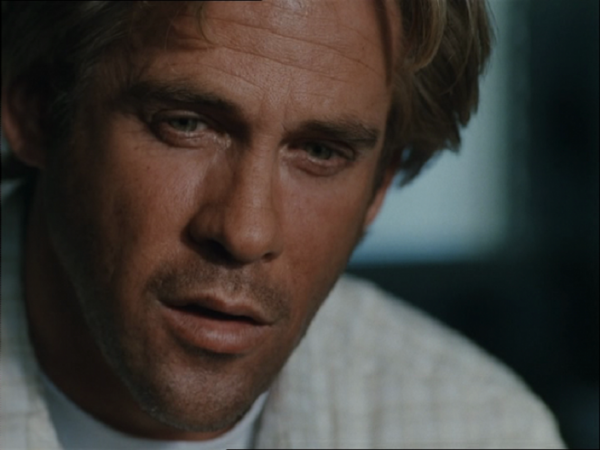 Fugitive Mind is sadly a lowpoint in the career of Dudikoff and not one I can recommend.

Plot: When a patient begins to piece together his past after suffering from severe memory loss, he discovers that he is the victim of a fiendish experiment-and now his mind has been programmed to carry out an assassination of an important government official.

Review: The movie is basically a weird mix of Total Recall and Timebomb (with Michael Biehn) but sadly nearly as entertaining. The Director, Fred Olen Ray is kind of a B-legend on his own, with movies (a total of 148!) like Super Shark, Bikini Frankenstein and already two movies with Dudikoff under his belt.  Many of his movies are bad, but simultaneously freakishly entertaining. Dudikoff is always a likeable lead and also a legend so I was prepared for a cheap but heavily entertaining movie… sadly, I was hugely disappointed.

The movie is plain boring; I anticipated a stupid story but the whole plot of the movie makes no sense; the whole hit and the preparation of the whole thing is plain crazy.
Why the kidnapped and brainwashed Dudikoff when there was no need to kill the character of David Hedison at that point? Maybe I missed a time travel twist…

It would be nice to say that the script is influenced by both of the previously mentioned movies; a whole lot is shamelessly stolen but reassembled in a way that makes an average B-Movie look Oscar worthy.

After basically two minutes of watching the movie you know it was pretty cheap but the worst thing is nothing particularly exciting happens. The fights are very short and simple… a fistfight here and there… not very exciting.

Next to our favorite American Fighter there are some familiar faces: Heather Langenkamp (Nightmare on Elm Street), David Hedison (as an old  Bond fan it was nice to see Felix Leiter of Live and Let Die and License to Kill again), Judson Scott (Star Trek II: The Wrath of khan) and Barry Newman (Daylight).
Acting wise they all do the best with what they are given, but they don’t have much to act with.

Overall, Fugitive Mind is sadly a lowpoint in the career of Dudikoff and not one I can recommend.