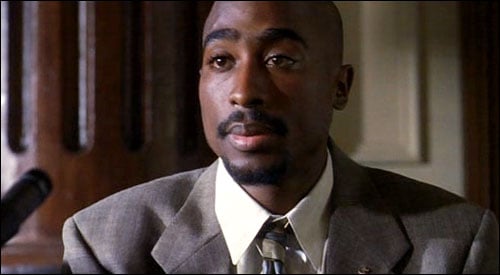 Gang Related is a movie worth discovering. It looks really good in its high definition upgrade, and although there are no special features on the disc it’s still worth a purchase.

Synopsis: Two corrupt cops murder an undercover DEA agent by mistake, and frantically try to cover their tracks by framing a homeless man for the crime. That involves juggling evidence, coaching witnesses, and improvising to keep their desperate scheme from unraveling.

Review: Theatrically released at the tail end of Orion Pictures’ existence, Gang Related was most notable for being the final film appearance by notorious rapper Tupac Shakur, but the film should be seen outside of interest by Shakur’s fans. It’s a gritty little cop movie with really good performances, and the script by director Jim Kouf doesn’t try to emulate the trend of late 90’s post-Pulp Fiction crime pictures. Jim Belushi and Shakur play corrupt cop partners Rodriguez and Divinci, two deeply tarnished detectives who have a racket selling and dealing drugs and then murdering the guys they do business with to recycle the drugs and repeat the process. Only on their latest run, they murder an undercover DEA agent and with their chief on their backs to solve the murder ASAP, they get themselves even deeper when they tamper with the evidence and frame an innocent hobo (played by a convincing and unrecognizable Dennis Quaid) for their mistake. When the hobo is cleaned up and identified by his attorneys (played by David Paymer and James Earl Jones) as a long lost billionaire, the two corrupt cops must come up with a verifiable witness to corroborate their bogus story, but their witness (played by Lela Rochon) isn’t as dependable as they hope, leading them to plot her murder too. With the odds stacking up against these two hopelessly despicable characters, will they turn against each other, or will they have each other’s backs when the walls close in?

An underrated cop thriller with good actors who had solid material to work with, Gang Related has a lot going for it in the way of characterizations, dialogue, and even a good, but repetitive music score by Mickey Hart. It would be unfair to say that this movie is only worth watching because of Shakur because there’s so much about it that was done well, including a very robust performance by Belushi. Quaid, who at this point in his career was only taking leading man roles, is quietly affecting in a small, supporting role, and co-star Rochon holds her own on screen opposite her co-stars.

Olive Films has just released Gang Related on Blu-ray for the very first time, and it’s a notable upgrade from the old MGM DVD from over a decade ago. As I said, it’s a movie worth discovering. It looks really good in its high definition upgrade, and although there are no special features on the disc it’s still worth a purchase.