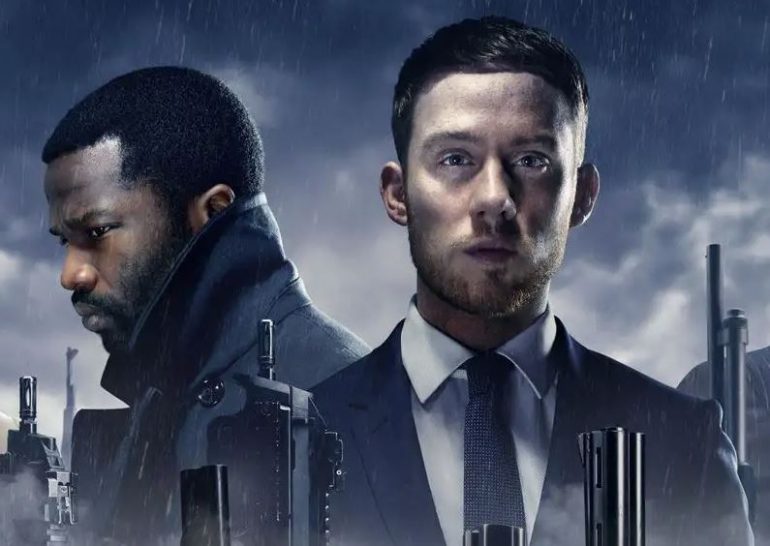 Top-notch acting and directing, coupled with some of the finest action filmmaking to ever grace the small screen overcome some muddled storytelling to make the first season of GANGS OF LONDON a “can’t miss” event for anyone who loves action or crime drama.

Plot: A turbulent power struggle breaks out between various London crime organizations after one of its leaders is mysteriously assassinated.

Review: “We are born into a certain world. It is chosen for us. Fated. Some might think it’s brutal. I say it is glorious.”

GANGS OF LONDON, the new television series from writer/director Gareth Evans (THE RAID), opens its second episode with the above quote from Irish gangster Finn Wallace (Colm Meaney, CON AIR). Wallace is the man who not only runs the money laundering for every major criminal organization in London, but he also controls the routes that every illegal drug supplier uses to bring their product into the city. Wallace, and his operation, are the lynchpin that holds all of the organized crime in the city together. So, when he is gunned down by unknown rivals the entire London underworld is sent into upheaval. Left behind, his family led by his oldest son Sean (Joe Cole, A PRAYER BEFORE DAWN), have to scramble to not only find his killer but to also keep the various crime families of London under control.

All of that makes GANGS OF LONDON sound much more straightforward than it actually is. In reality, Gareth Evans has helped craft a television show that is so densely layered with characters and plot that at times it is nearly overwhelming. It feels like new elements are constantly being added through the first five episodes of its nine-episode season. GANGS OF LONDON may seem at first like it’s all about Sean Wallace and his family’s quest for vengeance and stability, but they are the axis on which numerous other stories in the series revolve. Stories that are given nearly as much screen time as their own.

This leads to the main issue with the story, it takes several episodes before you really begin to understand all of the motivations of the people involved. With so many characters and such bleak subject matter, it begins to feel like just watching bad people do villainous things to each other for selfish reasons for much of the series. The lone exception to this is the character of Elliot Finch (Sope Dirisu, THE HUNTSMAN: WINTER’S WAR). Elliot is a policeman working undercover as an enforcer for the Wallace family while trying to gather enough evidence to topple their now shaky empire. He is, until deep into the season, the most relatable character in the series. Luckily, all of the characters in GANGS OF LONDON are portrayed by some of the finest acting talents working in the U.K. scene and that carries the audience through until others of the surrounding characters reveal themselves to be more sympathetic than originally perceived. So while the events on screen are not always easy to understand or relate to, the performances keep GANGS OF LONDON compelling no matter how dark or muddled the story feels.

The concept of the series may be all Gareth Evans and, his frequent collaborator cinematographer-turned-writer, Matt Flannery but the bulk of the directing was handled by filmmakers Corin Hardy (THE NUN) and Xavier Gens (FRONTIER(S)). Evans himself only fully directs two episodes of the season’s nine, the feature-length first chapter which sets the stage for the series and the fifth which begins to reveal the larger story at play that drives the back half of the season.  Hardy and Gens homage Evans’s directorial style sporadically in the episodes they each direct but their mutual backgrounds in horror filmmaking shine through in their expert use of tension and dread throughout the series. The sixth episode, directed by Gens, especially feels more akin to the horror genre as it features a prolonged interrogation that fits right in line with the French director’s take on “extreme” violence as it pushes right up to the edge of being torture.

Now, I’m sure some will feel disappointment at hearing that Evans is not at the reigns of every episode. Those people will be relieved to know that Evans still directs the action sequences for the bulk of the series’ episodes. When the other filmmakers hand off the action to him, GANGS OF LONDON delivers some of the most impressive action ever seen on television. Anyone who has seen Evans’s directorial work knows that he has a unique way of capturing action choreography where the camera feels as alive as the participants in the melee as it moves with them, sometimes gracefully sometimes chaotically, but never once obscuring the expertly crafted mayhem on screen.

There are numerous and varied action scenes throughout the series ranging in scope from things as low key as a bar brawl, with multiple assailants, where a game dart is used as a makeshift knife and a four-on-one machete fight inside of a cramped hotel room to something as grandiose as a full-on military-style assault of a fortified building. It’s as if Evans saw the rising quality of premium television’s action output and decided to step up and show any imitators how it’s really done. The action on display in GANGS OF LONDON feels truly “next level”. When the show really commits to it, the action is that good.

GANGS OF LONDON wraps up its first season by completely upending what the audience assumes will happen based on how similar crime stories in movies and television play out. In the end, that is one of the show’s biggest strengths, it is consistently surprising without ever being nonsensical. It’s rare for a story so steeped in well-worn tropes to be this unpredictable but in the final episode of the season, when the story is revealed to be much grander, and stranger, than expected, it’s impossible to not want to see where it all goes next.

To sum it up by looking back at the quote that opened this review, GANGS OF LONDON can be muddled. It most definitely can be brutal but if audiences stick with it, they will find it to be a glorious experience worth their time.