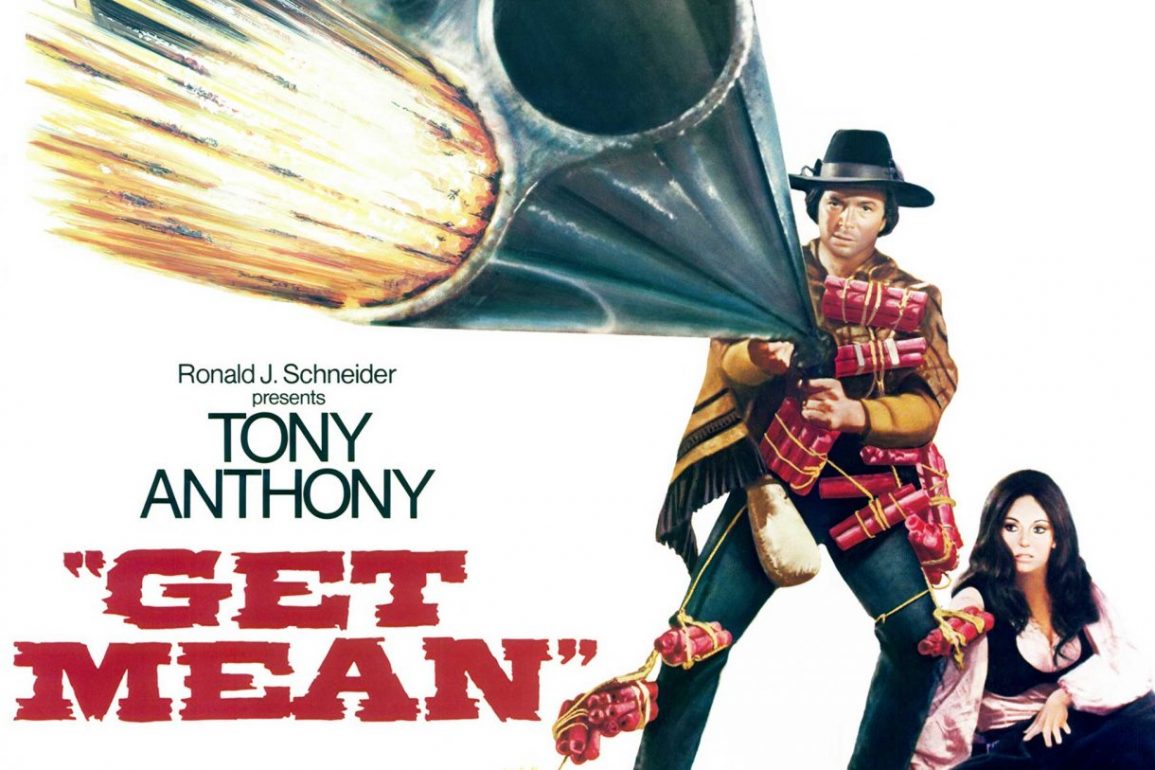 Completely bonkers and totally entertaining in a way only the Italians can muster up, Get Mean is a cross pollination of spaghetti western, period war film, and (if you can fathom it) post-apocalyptic alternate reality nonsense that makes for a heck of a time on your couch.

Plot: When an American cowboy stumbles upon a gypsy family in a wind-swept ghost town, they offer him a fortune to escort a princess back to her home in Spain. But this silent Stranger finds himself in over his head (and strung up by his feet) when he gets caught in the middle of an epic battle involving Vikings, the Moors, brutal barbarians, evil spirits, a raging bull, and a diabolical Shakespeare-quoting hunchback. Tired of their never-ending attempts to kill him, the cowboy arms himself to the teeth with guns, dynamite and a special surprise. Now it’s the Stranger’s turn to GET MEAN!

Review: Tony Anthony, the star of Comin’ At Ya! and Treasure of the Four Crowns starred in a number of spaghetti westerns, and his most indelible films were his films as The Stranger – A Stranger in Town, The Stranger Returns, and The Silent Stranger. The fourth and final “Stranger” film is Get Mean, and it’s just been released to Blu-ray for the first time. I just watched it for the first time, only expecting Tony Anthony’s wild and bizarre antics on screen, and I was NOT disappointed.

The film starts off with The Stranger (Anthony) being drug through a desert by a horse. The horse literally drops dead of exhaustion in the middle of an empty dustbowl town in Spain somewhere. A distraught princess (played by Diana Lorys) saves him, and proceeds to offer him a job that will pay $10,000: Save her country from a barbarian horde of invaders. A whole clan of Vikings has settled in her country, and they are slaughtering her people, including the Moors, a fledgling army run by an insane despot named Sombra (played by Lloyd Battista), who loves quoting Shakespeare even though no one around him has ever heard of the Bard. Both the Vikings – led by a brute named Diego (Raf Baldassarre) – and the Moors are after an ancient treasure hidden somewhere in the valley, and The Stranger walks right into a war between the armies who think they know where the treasure is. Armed with a baldric full of dynamite and a quadruple-barreled shotgun, The Stranger works hard at staying neutral, but since he’s got a job to do, he goes in four barrels first and blows stuff up real good.

Completely bonkers and totally entertaining in a way only the Italians can muster up, Get Mean is a cross pollination of spaghetti western, period war film, and (if you can fathom it) post-apocalyptic alternate reality nonsense that makes for a heck of a time on your couch. It’s fun in ways that movies made today simply can’t keep up with. Blue Underground has just unleashed this stick of dynamite into the world onto Blu-ray, and it’s a great looking package, with tons of special features and supplements, including a running audio commentary by star Anthony and co-star Battista, documentaries, deleted scenes, trailers, and a really interesting insert booklet that I read from cover to cover. All in, Blue Underground’s release of Get Mean is an incredibly fun one to add to your collection.