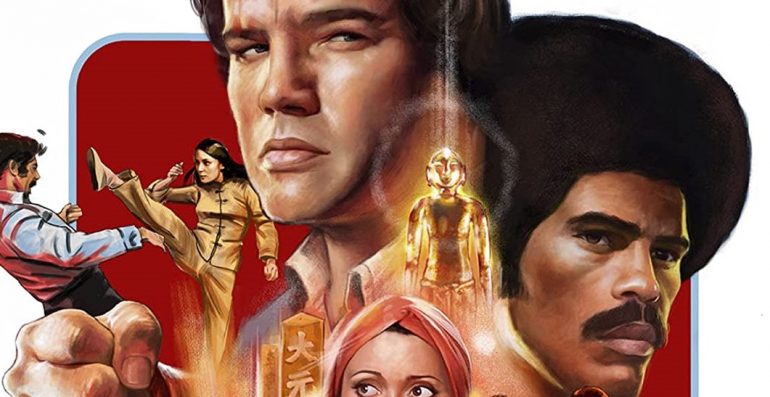 Plot: Various factions are fighting each other to gain possession of a very special statue. The statue itself is not worth much, the needles inside it are the true prize. These “golden needles” hold extraordinary and unique properties, if inserted in the right positions in a man he will gain super sexual prowess, if placed incorrectly he dies.

Review: A little golden statue with acupuncture needles sticking out of it has been a prized and coveted artifact through the ages, and those who’ve possessed it usually end up dead because someone else comes along and kills for it. Legend has it that the needles (when applied to skin in key areas) provide sexual bliss. The statue ends up in Hong Kong, where a minor adventure takes place involving a mercenary named Dan (Joe Don Baker), who is commissioned to find it and carry it to its next buyer, but when various factions chase him around and fight him for it, he calls on his best friend Jeff (Jim Kelly) to help him out.

Silly and instantly forgettable, Golden Needles is a throwaway movie that sadly doesn’t use Jim Kelly nearly enough. The director, Robert Clouse, worked with Kelly on the films Enter the Dragon and Black Belt Jones, but their work here is merely a footnote. Baker hardly qualifies as a martial artist or action star, despite the fisticuffs he gets into here. If you’re looking for better Clouse / Kelly films, you know where to go.

Kino Lorber is about to release Golden Needles in a new Blu-ray edition, and I’m happy to report that the new 2K transfer nicely upgrades the previous transfer featured on the MOD DVD from MGM that was released about a decade ago. A new audio commentary by two film historians is included, as well as radio spots, an image gallery, the trailer, and newly commissioned artwork for the cover.