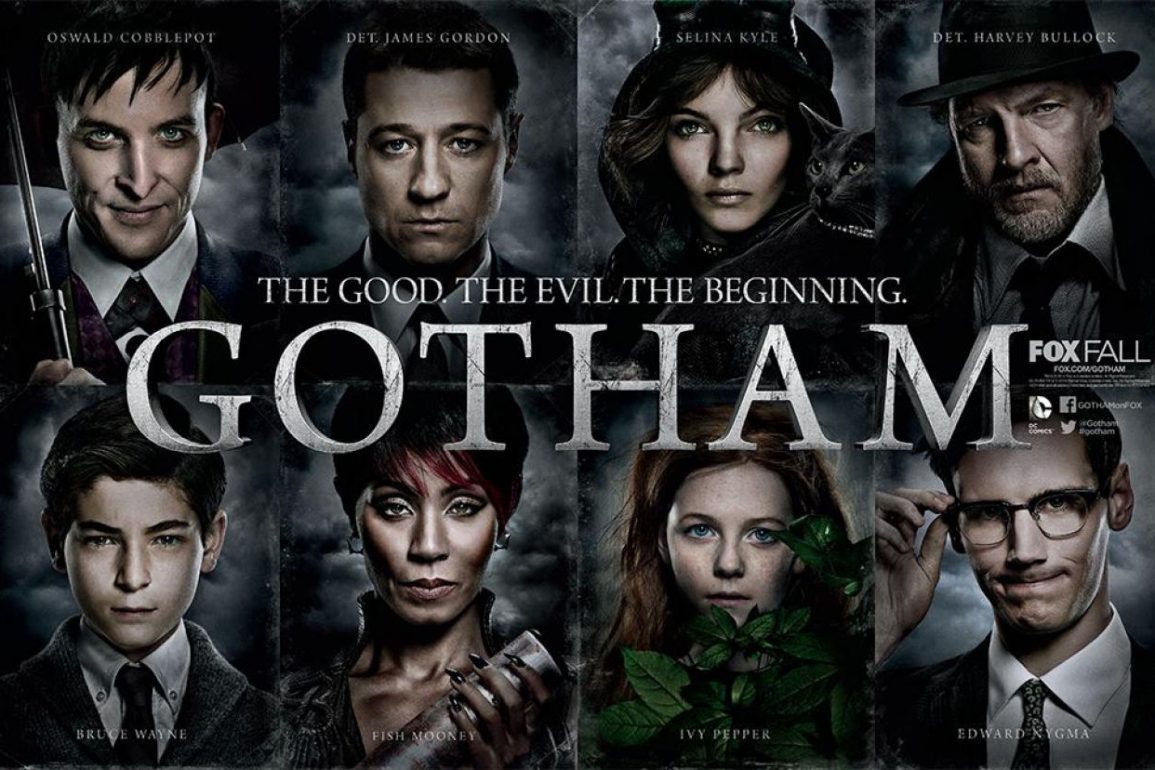 Gotham is dark, captivating and enthralling feeling unlike any version of the Batman Universe we have yet seen in live action. This is essential stuff.

Review: As per usual, I’m always late to the new line-up of T.V. shows. I wait for the DVD and Blu-ray releases to catch up on anything work catching up on, and to be perfectly up front about my first impression of the street bills that started appearing around Los Angeles when Gotham was about to premier last Fall, I was skeptical at the high concept that the show was going for. How could it be that a show that purported to be set in the DC Universe – in Gotham City, no less – not have a Batman in it? The idea was intriguing in a pre-Batman Begins kind of world, but for whatever reason I just wasn’t buying it on the ads and the concept alone. But now that I’ve sat down to watch the entire first season (it always takes me awhile to get through anything longer than 13 episodes, and this first season is 22), I can happily report that Gotham has superseded my every expectation and has turned me into a believer. I’m now officially a fan, even if it’s a little late in the game.

Since I was new to the show and knew very little about it going in, I’ll just assume you’re not in the know yet either. It’s easier that way. Gotham is set in the now, in the present. Bruce Wayne (David Mazouz) is a kid, but he’s not playful or afraid of bats, or interested in comic books. He’s the super intelligent and perceptive orphan of the couple who used to be the toast of the city, Thomas and Martha Wayne. When they are murdered in front of him (we’ve seen it already a number of times in the feature films, and so this show gets it over quickly), he is left bereft and in the care of his British butler, Alfred (a perfectly cast Sean Pertwee), who actually used to be a highly efficient military man. The only other witness to the crime is a ragamuffin street urchin child – the cagey, but very cute Selina Kyle (Camren Bicondova) – who is more or less the same age as Bruce. Knowing that these two kids are going to grow up to be bitter rivals as The Caped Crusader and Catwoman some day makes their relationship in the show (when they interact in different episodes) all the more interesting.

Assigned to the murder of the Waynes is rookie detective James Gordon (Ben McKenzie), who is such a boy scout that the entire department shuns him because he’s the only one that doesn’t take graft. When he almost single-handedly solves the murder of the Waynes, he doesn’t become a hero, but an even bigger outcast because he has to do everything on his own to get anything done. His partner is a corrupt cop named Bullock (Donal Logue), who’s gone so far as to commit murder to stay in the good graces of at least one mob boss in the city. Speaking of mob bosses, there’s plenty to choose from in Gotham. There’s Flacone (John Doman), an old school disciplinarian who is #1, but it’s debatable who’s #2. There’s Maroni (David Zayas), a mobster who vies for power against Fish Mooney (Jada Pinkett Smith), a nightclub owner with her hands full of all sorts of underboss business. The newcomer to Gotham is a club footed sneak named Oswald Cobblepot (Robin Lord Taylor in a star making role), a man who’s garnered the name of “The Penguin” for his awkward gait, but he’s the one everyone underestimates for his whiles and ruthless back-alley planning. It’s clear that Cobblepot is the villain to watch out for in Gotham.

Through all of the very well produced and executed episodes of Gotham, I kept waiting for the penny to drop by having at least one extraneous episode that wasn’t core to the plot of the grand scheme of things, but it never happened. The show was consistently on point, never wasting a minute on a silly episode that would sidetrack the train from getting it to its final destination. Honestly, this show pulled of a little bit of a miracle in that every single episode gives us time to examine each of the vastly interesting characters, and it even has time to tease us with some of the most important characters who will end up being iconic villains further on down the line like Two Face (as Harvey Dent, played by Nicholas D’Agosto), The Riddler (as Edward Nygma, played by Cory Michael Smith), Poison Ivy (as Ivy, played by Clare Foley), and even The Joker (played by Cameron Monaghan). The sidebar plots with these future villains never got distracting in any way, shape, or form, and it was consistently engaging to see where the grand scheme was taking us. The story is about the villains, but the hero of the epic tale is obviously James Gordon (who will eventually become Commissioner, Batman’s greatest ally in law enforcement), and while the story is about the rise of the villains and the very gradual transformation of Bruce Wayne into The Dark Knight, the show wouldn’t work if it didn’t have a strong central hero to anchor it, and Gordon is that anchor. The final moments of the last episode leaves you on the perfect cliffhanger by putting Bruce in the throes of the mystery of the Bat Cave, and so Gotham finally finds its apt beginning, and I couldn’t have been more thrilled to have been so captivated by it all.

It’s simultaneously strange and incredible to know that what once might have been impossible to produce (especially for television) has now become commonplace. It’s true that we’re currently living in the golden age of television with so many rich shows on at the same time, and with Arrow and The Flash on over at the WB, it’s nice to have Gotham over at Fox. I’ll have to wait until next year to see how Supergirl and Legends of Tomorrow are when Warner Brothers releases them onto DVD and Blu-ray, but for now I’m content and more than pleased with the home video release (which is the only way I watch things at home – no downloading or streaming for me), which hit the streets, courtesy of Warner, several weeks ago. The nicely packaged video set includes plenty of special features for the interested viewers who enjoy flipping through the supplements.