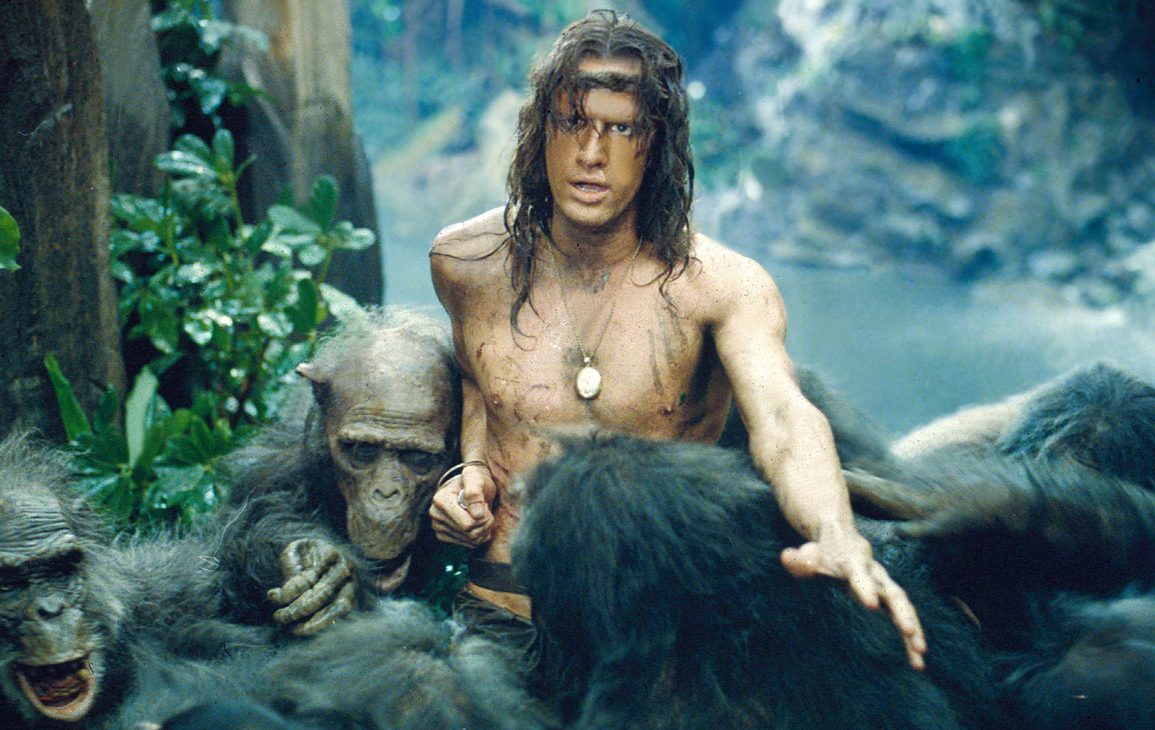 Greystoke: The Legend of Tarzan, Lord of the Apes (1984) Directed by Hugh Hudson Shown: Christopher Lambert
0

Greystoke: The Legend of Tarzan, Lord of the Apes (1983) Warner Archives Blu-ray Review

I’m happy with the Warner Archives Blu-ray, and so will you be. Enjoy.

Summary: A shipping disaster in the 19th Century has stranded a man and woman in the wilds of Africa. The lady is pregnant, and gives birth to a son in their tree house. Soon after, a family of apes stumble across the house and in the ensuing panic, both parents are killed. A female ape takes the tiny boy as a replacement for her own dead infant, and raises him as her son. Twenty years later, Captaine Phillippe D’Arnot discovers the man who thinks he is an ape. Evidence in the tree house leads him to believe that he is the direct descendant of the Earl of Greystoke, and thus takes it upon himself to return the man to civilization.

Review: After MGM tried to reimagine Edgar Rice Burroughs’s Tarzan mythos with the Bo Derek-starring Tarzan, the Ape Man, Warner Brothers went all out to set things straight by spending millions on a lavish back-to-the-drawing board take on the stories. Greystoke, for its time, was a pretty massive production, with incredible attention to detail to one of the greatest fiction stories ever told, but it’s almost entirely bereft of adventure, as it grounds its tragic hero – John Clayton (a.k.a. Tarzan, Lord of the Apes, as played by Christopher Lambert in his first sort-of-English speaking role) – in a world beholden to gravity and drama. We see his parents leave their sprawling estate in Scotland to explore Africa, and they become shipwrecked and stranded in a jungle full of wild creatures, namely apes. When his parents die, little Tarzan is rescued by a bereaved mother ape, and she raises him in a clan of power-hungry animals who fight and kill over supremacy. As he grows older, he uses relics from a world he doesn’t understand – the remnants from his parent’s shipwreck – to make weapons and he soon becomes the Lord of the Apes after he slays an ape-killing panther. Not long after that, other human explorers arrive and one of them – a Frenchman named D’Arnot (Ian Holm) – is in dire need of his help, and in the ensuing months of getting to know each other and learning each other’s language, the Frenchman realizes that this wild man is the long-lost heir of Greystoke. After persuading him to go back to Europe with him, D’Arnot becomes Tarzan’s teacher, friend, and almost a brother. When John/Tarzan is introduced to his family in Scotland, he encounters a whole new jungle – civilized society and its many upside down rules and disregard for animal life – and he plunges into a deep despair when he comes to understand that he’ll never be truly at home outside of his place in the trees with his ape family back in Africa. Even a burgeoning love for a young woman named Jane (played by Andie MacDowell) can’t tame the beast within him.

Rich and rewarding for anyone willing to demystify the legend of Tarzan and all his adventures, Greystoke, as told by co-writer and director Hugh Hudson (who did the awesome Chariots of Fire), is a very unique take on the Tarzan character. There’s no other Tarzan film quite like it. It’s deep and depressing on the whole, but it’s so well made and earnestly told that to debunk it wouldn’t ruin your chances of enjoying it for what it is, but it’s certainly not the action-adventure type of film almost every other Tarzan movie boasts that they are. To prepare yourself for Warner’s big budget reboot coming later this summer, sit down and watch Greystoke on blu ray and soak it in. With its majestic score by John Scott, astonishing make-up effects by Rick Baker, and panoramic visuals, it’s one of the richest and most sincere Tarzan movies ever filmed.

I’ve owned three copies of this movie throughout the years. I owned the widescreen VHS, the DVD, and now the definitive edition, which is the Blu-ray that Warner Archives recently released, and the latter version is the best looking by far of the bunch. It even has the commentary track by director Hugh Hudson and producer Garth Thomas imported from the DVD, as well as the theatrical trailer. I’m happy with the Warner Archives Blu-ray, and so will you be. Enjoy.