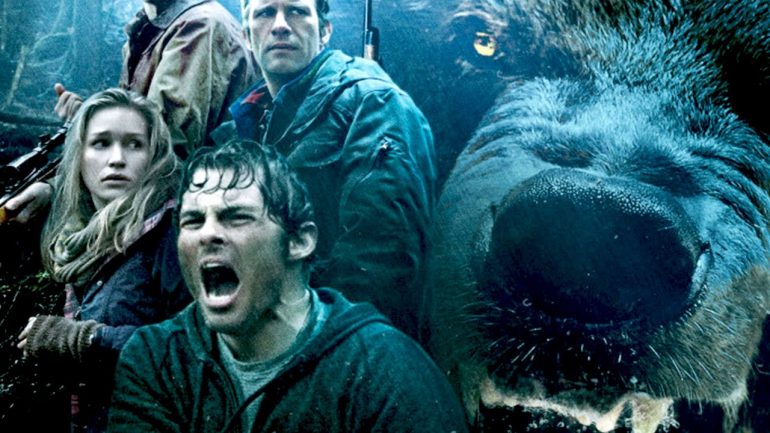 Despite its flaws, this is the best killer bear movie I have seen this year.

Plot: Two estranged brothers reunite at their childhood home in the Alaskan wild. They set out to find the one brother’s wife who is alone in the woods and may be stalked by an unrelenting killer grizzly bear.

Review: Grizzly (originally titled Red Machine then Endangered and not to be confused with the 1976 film of the same name), is billed as an action thriller horror, but sadly fails on all counts. Though not for lack of trying. With Vancouver standing in for Alaska, the movie is beautifully shot and contains some really stunning mountain scenes. The film stars James Marsden, Thomas Jane (who is quickly becoming this generation’s Eric Roberts), Piper Perabo (whose character is deaf and thus has no dialogue the entire film), Billy Bob Thornton (as the ornery old bear hunter) and Scott Glenn, who dutifully plays the soon-to-retire sheriff. (Essentially just a law enforcement version of the firefighter character he played in the Howie Long opus Firestorm)

I think the main problem with a film like this is the fact that you cannot have your actors doing any potentially life ending interactions with the bear. As such, you are forced to rely on the bear’s trainer doing short fight sequences, a bear stand-in, and some very poor CGI. Having said that, the part of the killer bear is played by an Alaskan Kodiak who was born to play this role. He literally tears up every scene he is in and I hope to see more of him in other bear movies.

In films where you are faced with technical limitations (such as dealing with a live bear), the less is more method should be employed. Jaws for example spent most of the movie creating terror by not showing , then teasing the audience with minor fin appearances by the shark, before the final reveal and showdown. Grizzly chooses to introduce us to the bear quite early in the film and he makes repeated appearances until the final battle and by then any tension that could have been built is already gone. There is just no feeling of imminent danger the entire film, but there should be. The bear is there and ready to attack, but as a viewer we never feel any pathos. The actors all do a fine job with their roles but something just doesn’t click. The story itself is nothing we have not seen a million times before in different incarnations, only this time the big bad is played by a big bear.

Although their performances are fine, Marsden and Jane do not look the least bit related so that’s an odd bit of casting. Billy Bob is clearly here to fill time between projects and spends his limited screen-time spouting wise about bears and man’s place in the food chain. He also gets to wear a really bad prosthetic bear injury towards the end so watch for that. Ms Perabo does what she can in a non-speaking role and Michaela McManus does her part as Marsden’s old flame and per-requisite injured woman who just slows the team down.

The CGI and green screen is really poor executed and that combined with the limp story, by the mid point of the film I found myself rooting for the bear.

Overall, despite its flaws, this is the best killer bear movie I have seen this year.