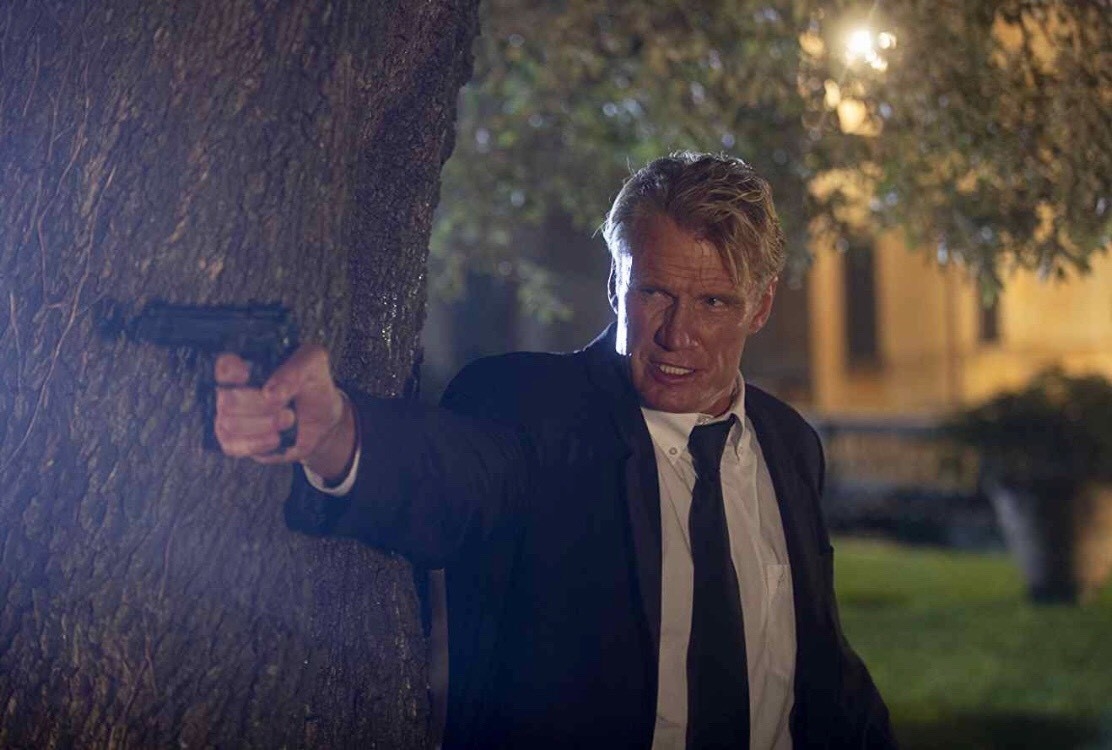 A solid Die Hard-style update that never drags and makes up for Dolph’s previous film disappointments this year.

Plot: Goro (Hal Yamanouchi, The Wolverine), is a criminal mastermind who plots to steal a massive cache of gold from the privileged Rossini family. Unbeknownst to Goro and his soldiers of fortune, one of Rossini’s guest is Michael Anderson (Dolph Lundgren, Creed II), a highly-trained Interpol operative who fights to not only save the hostages and the gold, but his doctor wife, Mary (Sinne Mutsaers).

Review: I had every reason to be excited yet have low-expectations at the same time. I had liked Giorgio Serafini’s work with Dolph on Blood of Redemption and Puncture Wounds but his follow-up collabs like Ambushed and The Tracker had pacing issues and limited action. Dolph had also fared terribly with co-star Natalie Burn previously in the amateur productions Acceleration and In the Name of the King 2, with Expendables 3 being their only solid co-star title (and that doesn’t really count since they shared no scenes together and she was essentially a credited extra role). This time, the posters looked captivating, Serafini reached out on the Ultimate Dolph site forums and gave the directing chair to his long-time collaborating producer Giorgio Bruno. The premise sounded like another take on the beloved Commando/ Die Hard/ Taken formula so did it make good use of all that it had in store?

While a little overexplained and having partially questionably dialogue delivery at times, this film retains consistent editing, lovely Italian scenery, a non-confusing set-up and a professional look. Since this plot is a Die Hard clone, let me use that film’s premise to explain the happenings: imagine the Nakatomi Plaza owner Takagi as main villain Hans Gruber; imagine the plaza setting changed to an Italy mansion; the whole heist involving rare coins and 3 keys to various incorporated safes of gold; and the millionaire who organizes the whole event being a non-sleazy/non-drugged out version of Ellis. Sounds bizarre and not necessarily like more fun, but trust me it actually works here. I was also fine with the filmmakers choosing to have Dolph’s hero be established as estranged from his daughter and then have that kid exit the picture by having Dolph get her out safely. The kid wasn’t annoying but I think we can all agree that the less kids in peril, the better.

Dolph’s character wasn’t that notable but served the simplified stealthy action overview well, some interaction with the hostages didn’t hurt and Burn was competent as the Interpol agent partner of Dolph’s character. This film can be a solid rental or one-time buy. It looks theatrical yet was never intended for such a big-screen release. Sound is clear but sometimes the gun noises get repetitive. Nothing ever drags and for non-overdone excitement, it’s hardly bland. It’s overall beyond straightforward in the fun it has on display.