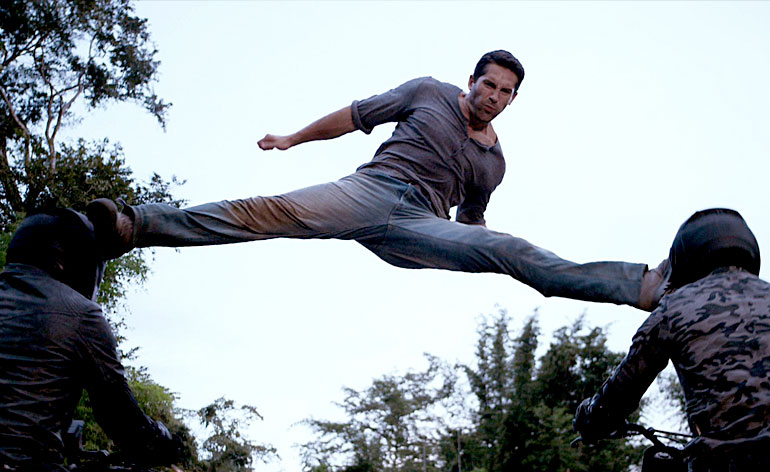 Hard Target 2 is a movie that does exactly what it says on the tin. It delivers, action, boat chases, elephant shit, gorgeous locations and as much ass kicking as you can handle.

Plot: Disgraced and retired mixed martial artist Wes “The Jailor” Baylor (Scott Adkins) couldn’t refuse the million dollar purse offered to fight in Myanmar. When he arrives to fight, he learns he’s been tricked into becoming the target of a human hunt. Carrying only water and a ruby-filled money belt for the last person standing, Wes must outsmart the heavily armed group who’s paid to kill him. As Wes fights for his life in the treacherous jungle terrain, the hunters become the hunted.

Review: The first Hard Target starring Jean Claude Van Damme was released in 1993 and was somewhat of a landmark film with Hong Kong director John Woo making his Hollywood debut. It also marked the first time a major Hollywood film was made by a Chinese director, so the pressure was high. It received a mixed reception on its initial release but no one could complain about it on a technical level and the stunts combined with Woo’s style have only added to its legacy as an action classic. Fast forward to 2016 and we now have Hard Target 2. This really is a bit of a misnomer as it is not a sequel as such, but a variation of the 1924 Richard Connell story The Most Dangerous Game (it features a big-game hunter from New York who falls off a yacht and swims to an isolated island in the Caribbean, where he is hunted by a Russian aristocrat).

This time around martial artist and action star Scott Adkins, steps up to the plate as ‘the hunted’ with Robert Knepper assuming the role of the evil Aldrich, the man who organizes these hunting parties for rich sociopaths. Director Roel Reine, a man known for making a lot of DTV sequels (Death Race 2/3, The Condemned 2, The Man With The Iron Fists 2) gets the nod for this one and as always, he manages to make every dollar of the tight budget count. (The original Hard Target was shot in 65 days with a budget of $18 million vs Hard Target 2 which had a shooting schedule of 20 days and a budget of about $4.5 million).

Scott Adkins of course carries most of the film giving audiences an onscreen fight clinic that he has become known for. Back in the 80s and 90s we were spoiled with how many great martial artist actors we had pumping out movies, but today, I dare say you would be hard pressed to name another actor with the onscreen charisma and true martial arts skills that Adkins brings to the role.  Knepper as usual, chews up the scenery with the restrained madness that he showed so well on Prison Break and continues to be an actor very much in the vein of Lance Henriksen and Willem Dafoe.

Although Rhona Mitra is prominently featured on the DVD cover and trailers, she is really a minor character appearing as Sofia, one of the rich nuts intent on hunting and killing Baylor. Having said that though, she has a fairly substantial fight scene with Adkins that he peppers with some humor. Star Wars’ Temuera Morrison plays the role of Aldich’s evil sidekick Madden, does a good job but is really a minor player until the final ‘big bad’ showdown.

As far as the rest of the supporting cast, that is really where the film can draw most of it’s criticism. The somewhat cliched father and son duo, get too much screen time and although it is Adkins’ film, he really needed better villains around him. There are things I didn’t love about the movie, but once you factor in the budget and tiny shooting schedule, those really fall to the wayside in the grand scheme of things. To compare this movie to the original Hard Target would be an injustice and I do think Universal would have been better calling it something totally different or Hard Target: A New Beginning (or something of that ilk).

Overall, this is a movie that does exactly what it says on the tin. It delivers, action, boat chases, elephant shit, gorgeous locations and as much ass kicking as you can handle.