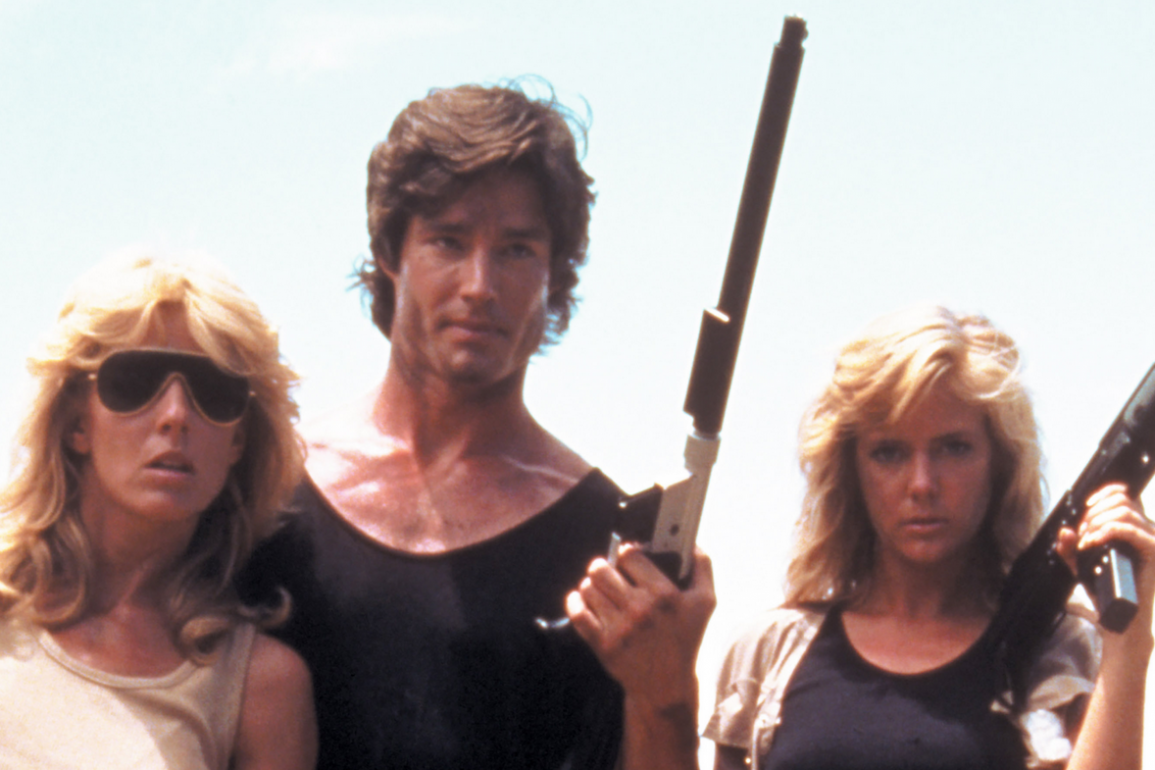 Hard Ticket to Hawaii has the Sidaris classic abundance of babes, bullets and bombs which in the end is a mildly entertaining but standard 80s exploitation movie.

Review: Just between us, fans, I’ve always had a soft spot for Andy Sidaris, the unofficial king of action exploitation B-movies. The man got his start in sports journalism and was a former director of TV staples, for example, ‘Monday Night Football’ or ‘Wide World of Sports’ on ABC and oversaw the coverage of the Olympic games. Besides, Sidaris is widely renowned as the inventor of the famous ‘honey shot’ – meaning, the moment of cutting to the cheerleaders or hot girls in the audience during downtime within a game. Meaning, Sidaris has made basketball far more entertaining for the 16-year old me, especially considering just how badly my favoured ‘Phoenix Suns’ have been having it since 2010.

In the 70s, Sidaris branched out into the movies, eventually directing a dozen exploitation movies in 80s and 90s, notable for the abundance of barely clothed women, action and the sheer absurdity of the plot. ‘Hard Ticket to Hawaii’ is the movie that illustrates all of the movie tropes that are essential to the works of Andy Sidaris. My copy of the movie has the director himself and Julie Strain introducing me to the Sidaris-verse. The plot is as cheesy and senseless as they get. It starts out with two drug enforcement operatives killed by gangsters working for the kingpin named Seth Romero on the Molokai Island. Donna and Taryn, two beautiful blond bombshells, intercept the diamonds Romero sent to his supplier by the name of Mr Chang, who conduct his criminal business from a luxurious yacht. Hence, Donna and Taryn enlist the help of other enforcers from their ‘Agency’ and take on these pesky drug dealers. Oh, and there is also a giant deadly snake, which broke free from its confinement and is lurking around, being a menace to both the good guys and the bad. Two Playboy playmates, Hope Marie Carlton and Dona Speir, star as Taryn and Donna. Once the situation gets out of hand, they call on their colleagues for help, which means, they bring in more Playboy girls and two guys. First one is a Stick Fighter from ‘Rambo III’, whilst the second one is Ronn Moss.

‘Hard Ticket to Hawaii’ has lots of over-the-top action scenes – gunfights, car chases and all. Even though these are rather campy, there are still some truly hilarious moments, like, Moss’s character constantly using a rocket launcher instead of a pistol even in close quarters; or him using a Frisbee with razor blades to kill one of the villainous henchmen. The latter moment even ended up on YouTube, titled as ‘Greatest Frisbee Scene In a movie 1987’. Yet, for some reason, I prefer the moment when one of the bad guys tries to pull off a drive-by shooting, using a shotgun, a skateboard and a blow-up doll in the shape of a bikini-clad woman. As I said, boobs are everywhere in this movie, even the blowup doll has them. The assassin fails miserably and gets blown up, as Moss says, aiming a rocket launcher at him, “it’s the only gun I can hit a moving target with”. Yeah, the movie is full of these lame one-liners, like “If brains were birdshit, you’d have a clean cage”. Somehow, at times, they work.

While his films are no ‘Terminator 2’, Sidaris obviously has his own unique cinematic style and the man’s movies share a theme of ‘trouble in paradise’. Akin to ‘GTA: Vice City’, these films are set in the South, have fast cars, lots of gunplay and while the place looks nice, deep down the place’s nature is one that is vicious and violent. Besides, they exist in the same shared universe and that is always fun. Taryn has a poster of ‘Malibu Express’ hanging at her place and discusses the main hero’s (played by Darby Hinton) sexual prowess. Such a connection is enough for me, I mean, ‘Red Scorpion 2’ didn’t even have that much of a callback to the original movie.

What is more, as usual for Sidaris’ movies, the film does indeed look good; Hawaii never fails to charm. Surprisingly enough, the 80s pop title song is catchy as well.

As for the nudity, ‘Hard Ticket’ is not a soft-core porn the way ‘Malibu Express’ is – I mean, really, ‘Express’ has way more sex scenes, so much that you kind of forget you are supposed to be watching an action movie. Whilst the girls in ‘Hard Ticket’ show lots of skin and Sidaris was never a prude. At any rate, this movie is way more well balanced when compared to his other works. Still, I prefer ‘Seven’ and consider it the man’s masterpiece, while the ‘Hard Ticket’ holds the second place. The movie is so eighties it hurts, in twenty first century it appears to be more of a parody of the era’s quirks than anything else. If there ever is a museum of action movies, ‘Hard Ticket to Hawaii’ definitely belongs in there. Besides, along with other movies of Andy Sidaris, it is a definite collection of 80’s Playboy playmates.

Truth to be told, this movie is full of bullets, explosions, babes, bikinis and there is also a giant snake, that somehow ties into the plot. Then again, whom am I kidding, speaking of that ‘plot’, whilst it is virtually non-existent?

Is ‘Hard Ticket to Hawaii’ a good movie on par with the best 80s flicks? Hell no. Is it so bad it’s kinda good in a stupidly entertaining kind of way? Definitely.