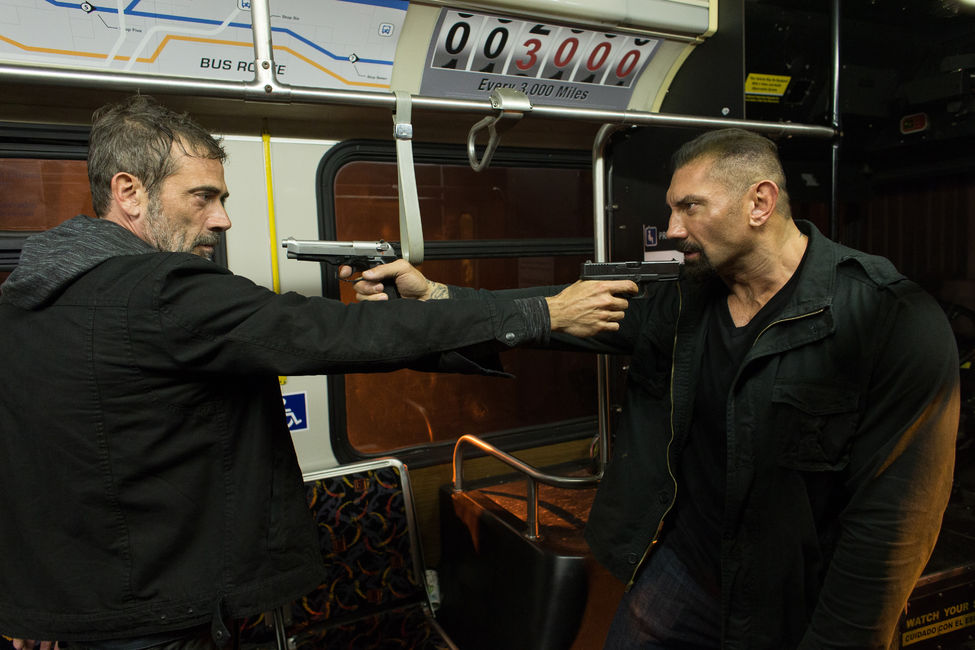 Great performances and some really tough and touching scenes. This movie is a must see for those looking for a fun ride and a bus that doesn’t need to stay above 50mph.

Plot: When their attempt to rob a casino owned by the feared gangster Pope goes awry and a shootout ensues, Vaughn and Cox are forced to flee on foot and hijack city Bus 657 and take the passengers hostage.

Review: If you have seen the 2009 action film The Tournament, then you are already aware of the work of director Scott Mann. Heist (titled Bus 657 in some territories), is just his second feature film but he has managed to pull together a great cast and craft a very cool movie.

Jeffrey Dean Morgan plays Vaughn, a father who works at The Swan, a casino owned by Pope (played by Robert DeNiro), and barely makes enough to pay for his sick daughter’s medical bills. Once notified that he is behind on his payments and his daughter will have to be bumped down the line on the treatment list, he asks Pope for a loan. Needless to say that does not go very well. Now in desperate need to get the money by the deadline, he takes up an offer presented to him by Cox (Dave Bautista) to rob the casino. That’s when things unravel very quickly.

Heist is a mixture of a drama and thriller with some cool action sequences. A great deal of the film takes place in the small confines of a city bus which helps add to the drama and heightens the tension. Like Dog Day Afternoon meets Speed.

Action fans will love seeing Dave Bautista losing it and becoming a full on psychopath while trying to maintain control of the situation. Gina Carano also gets to make a nice turn as the hard but fair police officer who first tries to stop Vaughn and Cox and also manages to lay a beating on Bautista like only she can.

Screen legend Robert DeNiro’s portrayal of Pope is an interesting one. Having made a career of playing epic gangsters, tough guys and wiseguys, this particular role takes him into a different place. Pope is a man on the brink of a life change and is trying, in his own way, to start to atone. It is a role that he plays well and had it been any other actor it may have not had the same impact when he reached the final scenes.

Jeffrey Dean Morgan of course is the glue that holds the entire movie together. He plays the role of Vaughan perfectly. He has some swagger, some humor and some toughness all the while showing how tortured and helpless he feels in trying to help his daughter.

Heist was filmed in just 17 days on a very tight budget, but that certainly does not show on screen. By keeping everything economical Mann and team got the most they could out of everyone involved and they really shine.

Overall, I really liked it. Heist has some great performances and some really tough and touching scenes. This movie is a must see for those looking for a fun ride and a bus that doesn’t need to stay above 50mph.