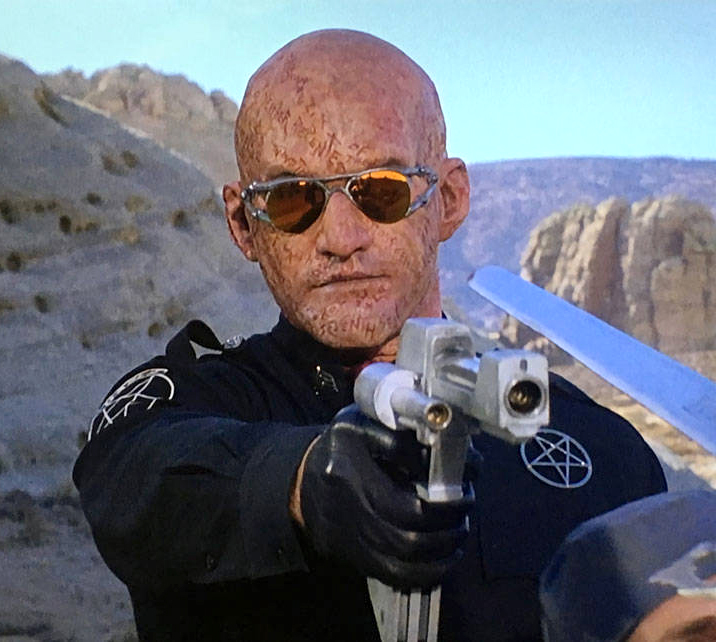 Well worth the price, this Blu-ray is a keeper.

Plot: An eloping bride is taken into Hell, and her fiancé must pursue.

Review: Eloping young adults Charlie (Chad Lowe) and Rachel (Kristie Swanson) are on their way to Vegas when they take a bad turn on a deserted stretch of road, and they’re pulled over by Hellcop (C.J. Graham who played Jason in Jason Lives: Friday the 13th Part VI), who mutely abducts Rachel and drives off to hell with her in the backseat of his suped-up patrol car from another dimension. Despondent and without a paddle, Charlie seeks help from the wily old codger down the road (played by Richard Farnsworth) who knows a thing or two about Hellcop and how to get to hell and back.

Driving off in the codger’s radical truck and wielding a shotgun, Charlie goes straight to hell, finding himself in the nether regions of space and time where hell is a sweltering pit of scuzz, bad taste, and poor service at the only diner in sight. Even Hitler, Attila the Hun, and Cleopatra sit around telling bad jokes, and so Charlie is clearly out of his element as he quests to save Rachel before she becomes Lucifer’s bride. Using his shotgun (which isn’t good for much since everyone in hell is already dead), some assistance from a kindly auto mechanic named Beezle (Patrick Bergin), and plain good sense not to get caught by Hellcop and a biker gang, Charlie somehow manages to get involved in the race of his life as he’s forced to go up against Hellcop (whose face looks like a grizzly road map of rituals gone wrong), a demon, a meat grinder, and the devil himself.

Highway to Hell was one of those instant midnight movie cult classics the second it was released to theaters in 1992. I actually remember when this got a brief theatrical release, and those were the days of wild and crazy films like Roadside Prophets, The Reflecting Skin, and Hell Comes to Frogtown when wacky movies would still get theatrical releases. Nowadays studios have to spend hundreds of millions on something as bonkers as Jupiter Ascending for a cult movie to be born, but back in the 80’s and early 90’s low budget cult movies were made all the time, and virtually deliberately so.

Highway to Hell is a cross between Maniac Cop and Beetlejuice filtered through a Road Warrior lens, and while it doesn’t always “work,” it’s a fun mishmash of action/horror/comedy, and Brian Helgeland (976 Evil, L.A. Confidential) wrote it! Ate de Jong, who’d just done Drop Dead Fred (which I saw theatrically) directed it, and there’s a lot to be said about making back-to-back cult films like those two.

Long lost to VHS-only limbo, Highway to Hell has just been released in a pristine Blu-ray remastered edition, and it looks stupendous (leagues better than my old VHS tape). It’s been upgraded to widescreen (1:85:1), with some great special features, including a hilarious on-camera interview with make-up effects artist Steve Johnson, and a running audio commentary by Ate De Jong. Well worth the price, this Blu-ray is a keeper.