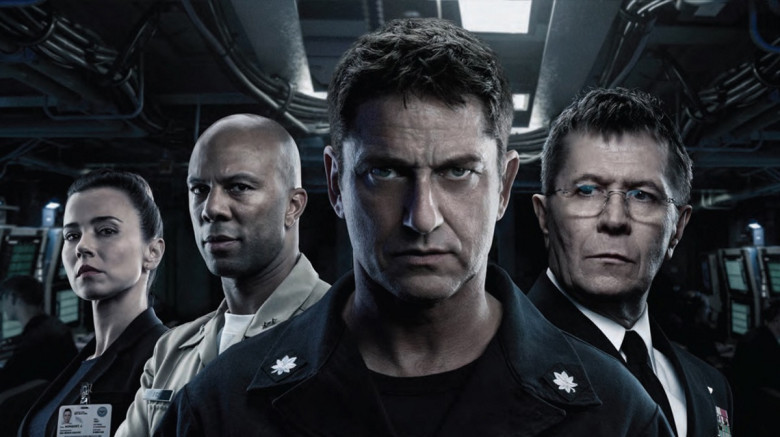 Hunter Killer won’t be on too many “Best of the Year” lists but it’s a fun submarine action thriller with moments of tension and a great cast. Have a few beers beforehand and you’ll have a blast.

Plot: Deep under the Arctic Ocean, American submarine Captain Joe Glass is on the hunt for a U.S. sub in distress when he discovers a secret Russian coup is in the offing, threatening to dismantle the world order. With crew and country on the line, Captain Glass must now assemble an elite group of Navy SEALs to rescue the kidnapped Russian president and sneak through enemy waters to stop WWIII from beginning.

Gerard Butler is a Submarine captain aboard the USS Arkansas sent to investigate when a US sub goes missing in Russian Waters and subsequently has to rescue the Russian President.

What follows is a Russian Coup, bonding between opposing Captains, and a cat and mouse game underwater that has its moments of tension but is largely humourless throughout. Unless, Under Siege 2 is your standard for “unintentionally funny” action movies, there aren’t many one-liners on hand here.

Gary Oldman and Common both don’t have much to do other than chew scenery back on land trying to decide whether to start World War Three or not.

The Russian President was “far too handsome” according to my wife and there is a female US President to help balance up the testosterone.

I have to give points for the sound design and the score which I thought was very effective throughout. Forgive the dubious politics and attempts at depth (pun intended).

But ultimately it comes down to what you expect from a movie. This was a Gerard Butler action movie. I like his action movies. So I enjoyed it.