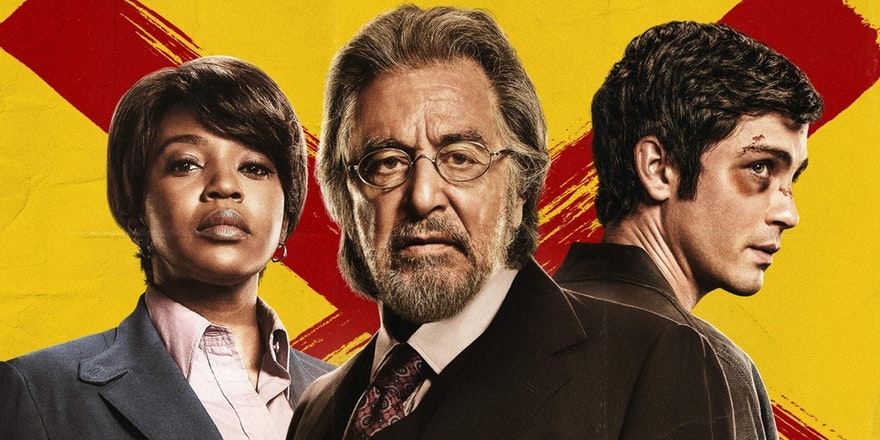 Not unwatchable but a still easily forgettable action-crime historical fiction thriller due to the lousy build-up, never earning its keep and becoming too preachy.

Plot: A group of Nazi hunters, lead by underground leader Meyer (Al Pacino, Heat), discover hundreds of high-ranking Nazi officials in 1977 New York City, conspiring to create a Fourth Reich in the U.S. They then set out to bring the Nazis to justice while thwarting their new genocidal plans.

Review: Not to be confused with the short-lived SyFy Channel original series of the same name from 2017, there was plenty to get excited about for this Amazon Prime original series. New edgy comedian-turned-Horror maestro Jordan Peele was executive producer; the premise followed a batch of NYC-formed Nazi hunters with stylish commentary; the cast included Logan Lerman, Al Pacino, Carol Kane, Saul Rubinek, Josh Radnor, James LeGros, Tiffany Boone, Dylan Baker and Louis Ozawa (with guest roles by John Noble, William Sadler and Sam Daly). What was worth missing? The plot, pacing and editing for starters apparently.

Some of us like slow-burning potboilers, others like fast-moving or rather twisted premises. I honestly am down for anything as long as it’s consistent, let alone engaging in some fashion. From the get-go, everything about this was dipped in wrong sauce from the overdone cursing to non-engaging tension that was trying to be established. There was also nothing new or fascinating brought to the table in this political-vigilante drama nor was there any reason to continue watching- especially after the repetitive fourth episode. Instead of feeling like previous streaming shows like Bodyguard, Bosch or Jack Ryan where the establishing scenes introduce the tone and make everyone fine-tuned to the plot twists that lie in store. This show instead becomes EXTREMELY drawn out and by the time any partially entertaining moments like seeing the inevitable interrogations or actors playing Jewish characters, the pay-off hasn’t even been earned because we’re already not dedicated to any of the happenings. We’ve had shows like Game of Thrones have uneven transitions and streaming shows like Reprisal have at least overdrawn scenes due to the creators’ own self-indulgence. But here you get too much disorganized material here due to constant flashbacks to the crimes seen in Auschwitz then you got the various authority figures connecting the investigations- all which become the dullest of all due to the viewer already knowing most of thus redundant information or not needing to know this.

We try our best to be positive here though so here we go: the somewhat unrecognizable acting is reasonable as expected, the premise was cool, the camerawork and lighting sometimes inspired, the atmospheric score and the model-work in the opening theme were all clicking. Everything else was a victim of uninspired speeches, the material being all over-the-place, the licensed music being redundant, the slow moments never felt necessary, the supporting villain actors being too cartoonishly over-the-top and the revenge killings not delivering anything memorable or rewarding. Inglourious Basterds had more killing in its slow pacing but that was campy and this isn’t. Not for a minute are you even supposed to expect Batman-level camp but this isn’t top-rate either. At ten episodes and with high-rate talent involved, I still expect better like a mind-blowing reveal or something that truly raises all the stakes. For this, it’s best to expect nothing because that’s ultimately what one’s left with.