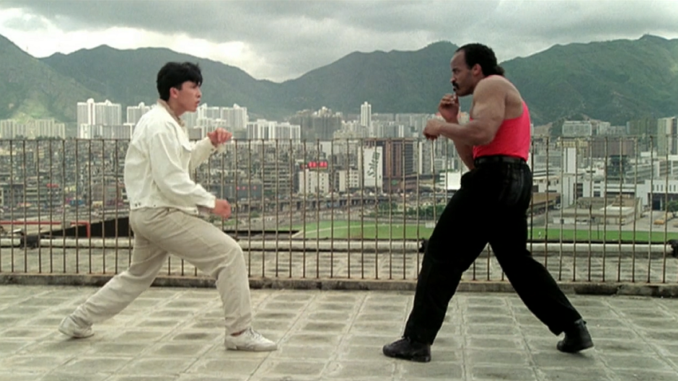 A very gripping eight-part series (with a bunch of in-name-only follow-ups) that are (mostly) worth tracking down despite limited availability and ways to watch. You don’t know what badass Hong Kong action cinema is until you witness the first four at least!

The popular Hong Kong series might not always agree with which sequel is related but it always knows what it is: a fun excuse to show Hong Kong martial artist-equipped police fighting drug-dealing criminals and deadly terrorists, plain and simple! I couldn’t find any other overviews of the whole saga so decided to make my own after recent viewings so hopefully you enjoy:

In the Line of Duty/Yes, Madam!/Royal Sister (1985) stars Michelle Yeoh, Cynthia Rothrock, Yuen Biao-lookalike Mang Hoi and even filmmaker Tsui Hark(!). This film is dynamite in every single frame of the film and its score is certainly iconic in that fancy ’80s kind of way. As far as I’m concerned, this is the Dirty Harry kind of hard-boiled crime film you come back to without groaning at the outdatedness or feeling too cliche that it’s annoying. Corey Yuen stages each frame beyond expertly, he’s much like Luc Besson and stunt legend Craig R. Baxley where he knows how to incorporate to-the-point exposition, laid-back yet still nifty plot twists and prompt characterization without dragging and still giving the audience what they want. 1985 was a big time for action films and you can’t possibly forget to include this among that year’s best action flicks. 4/5 Stars

In the Line of Duty II/Royal Warriors/Police Assassins (1986) stars Yeoh, Hiroyuki Sanada (years before The Last Samurai!) and Michael Wong (many years before being in Beast Cops and The Final Option film series). The villains are neat, the endless sequences are delightfully gruesome, the music score is hypnotizing and the finishing moves/kills are near X-rated in their gory glory! Another instant classic that is debatable whether it outdoes or is just as good as the first entry but nonetheless it earns its keeps and from the opening on-board plane fight to the non-stop armored tank finale, you don’t ever want the sheer insanity to end (Suck it Rambo!). And I’m not insane when I say this is the best kind of insanity!  4/5 Stars

In the Line of Duty III/ Force of the Dragon (1988) stars Cynthia Khan (who recurs throughout the series) and Hiroshi Fujioka. It could easily be my favorite score of the entire series due to how that bass erupts on the speakers! Film-wise, it can’t outdo the first two (not even the fourth entry!) but it’s still easily one of the best Action genre films for that year regardless. The energy is still there, Khan makes for just as cool a lead star as Yeoh and the plot still becomes interesting if still not an imaginative rehash. This one has easily the best cinematography of the whole series despite some of it not adding to the material but since it allows one to escape into the world it’s creating while still keeping the tension cranked up, think of that as just adding fuel to the fire. And what glorious fires we see on display here- followed by fireworks no less!  4/5 Stars

In the Line of Duty 4/Direct Hit Witness (1989) stars Khan, Wong (much like the other recurring stars, he’s playing a different role) and a young Donnie Yen. This has easily the second best electronic score (and perhaps the second best opening scene) and it’s all helped by the return to the grittiest of the grit feel that was perfectly done in the first two entries. Perhaps the most Neo-Noir looking of the series, the baddie’s smuggling scheme adds extra change of scenery while also allowing for more creative dispatching of the numerous goons. Screw it, this is the best of the series by far! Especially when the heroes become fugitives for most of the runtime. 4.5/5 Stars

In the Line of Duty V: Middle Man (1990) stars Khan, David Wu and Elvina Kong. An effective yet not must-see outing, the film doesn’t drag as much like Young and Dangerous series (which happened just as this series was concluding its run), this saga was now past its prime. But it’s not unbearable and some of the fights do pack a punch especially for Khan’s hardcore fans. It’s serviceable but barely leaves a mark, let alone making it to the finish line barely intact. As for the plot, what plot? It’s just a regurgitation of previously done ideas only they pack zero punches due to being lazily incorporated and forgetting everything that made those first four entries stand out. Watch for some stunts and fire up the movie snacks but this is honestly the only stand-alone entry you need bother seeing. 3.5/5 Stars

In the Line of Duty VI: Forbidden Arsenal/Underground Arsenal (1991) stars Khan, Waise Lee and Robin Shou (the future star of Mortal Kombat!). This film takes its sweet time getting going and barely merits being called an Action film despite doing a good job of fooling everyone into thinking it’s going to be non-stop fights and explosions. 2/5 Stars

Sea Wolves (1991) co-stars Gary Chau and Simon Yam. The new cast additions are the best used but the whole thing flows rather well and while rather forgettable, it still amuses and excites when needed while being hardly noteworthy. Any film that’s hardly dull should get some sort of back massage at the very least. 3/5 Stars

Yes, Madam ’92: A Serious Shock/Death Triangle (1992) stars Kahn again and features HK superstar Moon Lee joining the crew. What a waste as once again it’s one failed gag after another with hardly a moment dedicated to fighting and it’s easy to see why these films become hard to follow as they are not only unrelated but don’t have the goods that we came here to see. 2/5 Stars

Yes Madam 5/Red Force 5 (1996) is the final(?) entry in the series known to date with Khan once again appearing. It wasn’t unwatchable but it still feels rather stale compared to the hard-acts-to-follow prior. I’ll give it extra points for never dragging and not becoming uninteresting to watch despite little happening and nothing memorable to speak of. It’s great to see it not inserting random romance or comedy gags like the other lesser in-name-only releases but this is still not something you’ll give a flip about after watching. Khan is clearly still having fun but she can be a badass in her sleep so does it really matter? I guess the main villain’s grenade launcher equipped machine gun was cool but I could watch any Planet Hollywood for that kind of thing any day instead of waiting for it to be displayed in the last 20 minutes! Find this dirt-cheap if you must seek it out.  2/5 Stars