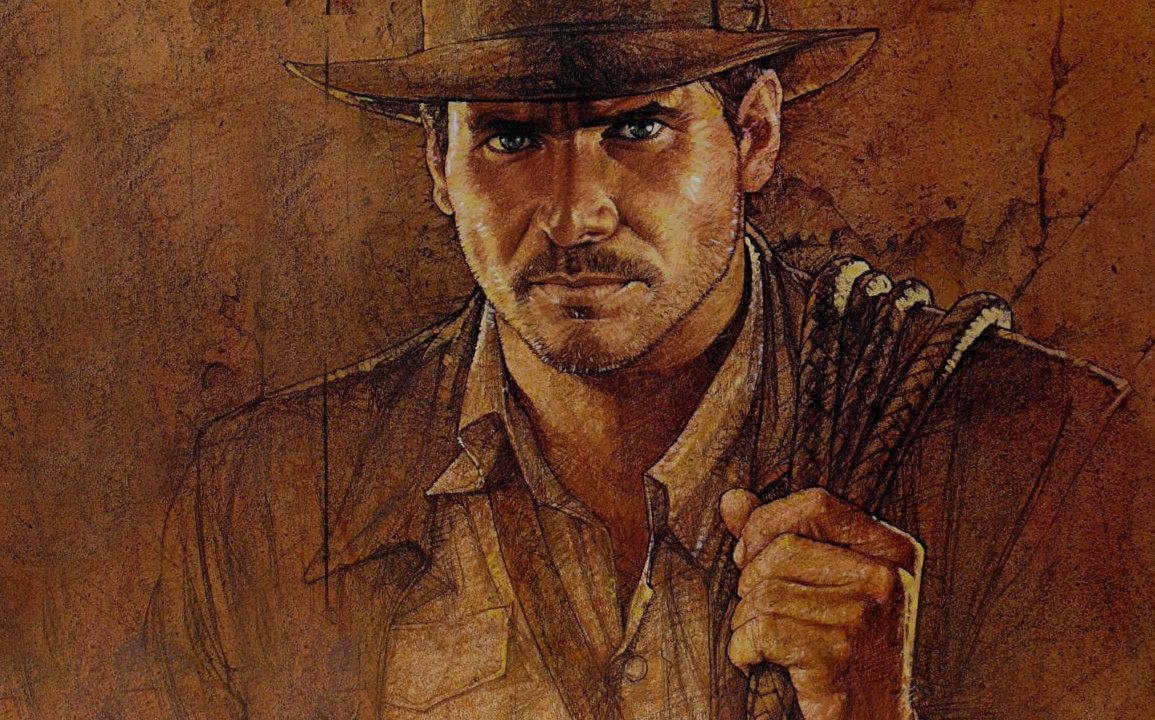 Indiana Jones: Raiders of the Lost Ark vs. Temple of Doom vs. Last Crusade

Indiana Jones. The name alone invokes images of jungle pursuits, mine car chases, desert encounters and bull whip cracks. The first three Indiana Jones pictures are arguably the greatest adventure stories ever committed to film (we won’t talk about the 4th film, of course). When people talk about them, they just refer to them as the Indiana Jones trilogy and break down their favourite moments. Which of the three films is really the superior?

Raiders of the Lost Ark

Companions: Marion Ravenwood has undoubtedly one of the greatest introductions in cinema. Engaged in a drinking contest in Tibet, she’s a badass without even saying a word. The character could easily have dwindled when she joins forces with Jones, but Karen Allen’s feisty performance shines throughout the film. No greater example of this is when she is toying with Belloq, making him believe that he is charming her when in fact she has every design to double-cross him. Few are able to stand up to Indiana Jones, but Marion Ravenwood is one of them.

Villains: Paul Freeman’s Rene Belloq is a bit like Indiana Jones if he decided to go dark. Charming and reasonable, yet slimy and manipulative, Belloq takes the easy way out, choosing to have Indiana Jones face all the danger to get the fertility idol at the beginning of the film, as well as siding with the Nazis to provide the manpower in his quest for the ark of the covenant. You almost feel like Belloq is how Indiana would have turned out if he decided to only worry about “fortune and glory” instead of what’s right.

Traps: No Indiana Jones is complete without some sort of ingenious trap (which is one of the reasons why the 4th film suffered) and in this one, we are introduced to the temple at the beginning of the film. You not only have to worry about tarantulas crawling up your leg and wide chasms to traverse, you also have blow darts and spikes coming out of the walls and a huge boulder looking to crush you! The infamous beginning sequence still gives me chills to this day and I vividly remember sitting in the front row for this film and trying to back up as that damned boulder rolled towards our hero.

Locales: For people who want variety, this film has it all. We begin in the jungles of Peru, journey to the snow of Nepal, then carry-forth to Egypt, after some adventuring there we move on to an island in the Aegean Sea. Phew! Pretty much, you have every environment you could ask for in this film, unless you wanted outer space, or maybe Atlantis. The shifting locales gives us a great sense of adventure as well as allows you to distinctly remember important sequences, which was a smart way for the audience to remember the movie long after seeing it.

Adventure: Indiana Jones is an adventure film, right? So, we have to talk about the adventuring! Indiana meets danger constantly throughout this film. Besides the aforementioned opening sequence, he has to deal with Nazi thugs in Nepal, then he has to find the Well of the Souls (which is chock-full of snakes…yeah, he doesn’t like those), then a pursuit in Cairo that memorably includes chasing Marion in a basket, bringing a gun to a sword fight and battling a bruising huge Nazi on a plane runway! That’s not even including the crazy ending which was the stuff of nightmares for more than one little kid.

Companions: Okay, first things first – I love Short Round. Giving Indiana Jones a kid to take on his adventure was risky business, as you had the opportunity for major annoyance there, but Shorty really didn’t annoy me that much and actually proves pretty useful, knocking some sense into the Maharaja before he can kill Indy with the voodoo doll. Of less use is Willie Scott, who is really annoying until about the halfway part of the movie. Until then, she’s pretty much only good for complaining and exclaiming how messed up the situation is that they’re all in. She does save them from the spiked ceiling though, so I will give her that.

Villains: Dude, anyone who is not scared of Mola Ram is lying to you. A Thuggee priest of face painting, Ram rips people’s hearts out and lowers them into molten lava! Ram is undeniably the scariest villain in the Indiana Jones universe, probably because unlike the other villains, we don’t actually understand his motivations. Okay, he makes sacrifices to Kali, we get that, but what’s the big picture? The others are about prestige and power, but Ram, unlike the others, isn’t doing this for purely profit, he believes in his brand of witchcraft and that makes him scarier than the rest. Plus, anyone who turns Indiana Jones into a mindless slave is just too evil for words.

Traps: The big trap in this film is seen when Indy and Shorty go wandering around the secret passage in Pankot Palace and find a ceiling with spikes coming down to crush them! Yikes! However, some people were even more disgusted with the fact that the outside of the room is littered with thousands of bugs! This isn’t a problem if you’re cool with bugs, but how many people can claim that? Unfortunately, Willie Scott is definitely not cool with bugs, which almost ended up resulting in a very flat Indy and Shorty.

Locales: We begin in a very nice, very elegant Obi Wan club in Shanghai, end up in a raging river and then in India. After looking at the village, we’re whisked away to the majestic Pankot Palace, where we discovered its secret tunnels and underground temple. We end up back outside, on a rope bridge, over a crocodile-infested river. The moral of the story? Stay away from elegant-looking places, for the dangers that exist within its walls outweigh the eye candy you see inside.

Adventure: You’re darned tooting! After the crazy fight in Shanghai, we get a white-water rafting extravaganza and then all sorts of hijinks at Pankot Palace and the Thugee temple within. Indy turns bad, Willie ends up almost sacrificed and most notably, a huge mine car race with an explosive finale! Nothing beats though the rope bridge confrontation – tell me that you weren’t worried when Harrison Ford turns and starts cutting the rope bridge. Just tell me.

Companions: Okay, here we get arguably the best companion of all – Sean Connery as Indiana Jones’ dad. Even though there was a lot of comedy with the role that you normally don’t want to see in an Indiana Jones movie, no one does it like Sean Connery. He’s stern with Indy, Indy is stern with him, they struggle to get along and yet, you sense that the two characters truly love each other. Of lesser note is Marcus Brody and Sallah, who reprise their roles from the first film, albeit for some reason, Brody is now bumbling and Indy seems perpetually annoyed with Sallah, barking at him at one point that he can’t count. Both of these characters were greatly diminished from the events in this film, which really was a shame.

Villains: We have here probably the weakest villains of the lot, not counting the 4th film. Dr. Elsa Schneider was decent as a love interest and her turn was completely unexpected, but her continued affection for Indiana Jones never made her a true villain. This fell on Julian Glover as Walter Donovan, who is barely in the movie and has a pretty graphic demise without really making much of an impact on the film. I would argue that the most effective villain in the film was Colonel Vogel who at least provides a danger to the Jones’ instead of Donovan’s bureaucratic approach, but as his end occurs before the climax of the movie, he too fails to deliver as impactful an opponent as the adversaries in the first two films.

Traps: We have to wait for the end of the movie where we get three impressive traps to test Indy’s wits and guile. The saw trap is pretty neat and stops people lesser than Indy in their tracks (and without their heads). The word of God trap was standard and a bit of a throwback to tile traps in the first film. The leap of faith was probably the best trap, only because it literally entails you need a leap of faith. Even though we know Indiana Jones will survive the trap, we’re also almost screaming at him that he’s nuts to try it because our eyes are showing us there’s nothing there!

Locales: Starting out in the wilds of Utah, we travel Venice and the underground tombs beneath it, before embarking to Austria, Berlin and Hatay on a whirlwind tour to find the grail. Again, like the first film, we get a lot of different locales and environments for Indy, his companions and his enemies to play in.

Adventure: Despite the jokiness shot throughout this film, we do have a lot of adventuring going on. Starting out, we have a pretty impressive chase across a moving circus train. We then have a confrontation on a boat in a rainstorm before exploring rat-infested underground crypts beneath Venice. We travel to Austria to view a daring rescue from a castle before embarking on a Zeppelin that leads to a biplane battle over Germany. Finally, we land in the desert to view a tank being chased by Indy and friends on horseback and then a harrowing battle inside and outside the tank. That’s all before Indiana has to beat the three tests in the Temple of the Grail and of course that thing has to crumble to dust, providing another obstacle for our heroes. They really packed the adventure in this last one.

If you’re looking for adventure and thrills, you can do no better than the Indiana Jones films. Long seen as a high-budget throwback to the adventuring serials from the 30’s and 40’s, the three films have stood the test of time and continue to thrill audiences to this day. While all three films have their standout moments, for me, the first film is still the best as it doesn’t have quite as many flaws as the other two. I prefer the wide-open adventure to different locales of the first film to the more intense and focused story of the 2nd one and I feel Last Crusade was a better-than-average carbon copy of the first film with too many attempts at humour as opposed to serious adventuring. That said, all three are still great films and you’ll be hard pressed to find a better trilogy to watch on a rainy day.