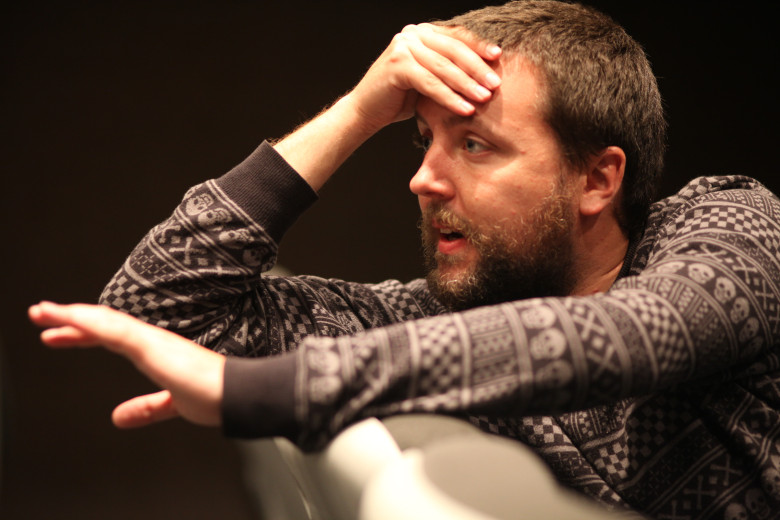 Writer/director Adrian Garcia Bogliano is one of Mexico’s most interesting and hard-hitting horror and suspense filmmakers. His movies I’ll Never Die Alone, Cold Sweat, Late Phases, and his latest film Scherzo Diabolico consistently have shown that he’s fully immersed in the dark and twisted subgenres of horror, and he’s in complete command of his abilities as a filmmaker. His latest – Scherzo Diabolico – is as dark as they come, but obviously with a twist: It’s a revenge film masked in the mendacity of ordinary, everyday life in Mexico City, and the truth is quite shocking. Fans of revenge thrillers may enjoy it for its stark, unflinching violence, and fans of horror are bound to get their bloodlust quenched.

You usually make films that you have written, but the film you did before your latest one was a great werewolf movie called Late Phases, which was written by someone else. Talk a little bit about the differences of making something based on your own material versus working with someone else’s script.

Yeah, most of my films I wrote them myself. So far. I’m really open to find other sources of material, other stuff. A big part of me, when I read other stuff, I don’t connect with it. That was a big exception with Late Phases. There were some things and some ideas there that I could really connect to. It was really interesting to me. I would never have written a werewolf movie. That was something that was out of my radar. It was really interesting to find that script that had a soul and interesting characters that I could connect with. After that, I decided that I wanted to get back to Mexico and do something with characters and situations that I could relate to. I wanted to come back here and be a bit closer.

Your new movie Scherzo Diabolico is very different than anything I’ve seen you do. It’s very much a current affairs type of movie. It shows the kind of thing we would hear on the news, about an abduction and violent revenge.

The thing is, I’ve had a lot of freedom with all the movies I’ve made so far. I’ve been very lucky. There are these trends in horror. We’ve been through a big trend with supernatural horror. Although I love supernatural horror, and I’ve done that, it was more difficult for me to pull off projects that did have supernatural elements, so I decided to do this movie because I knew that the way we were going to do it was going to be very independent and I was going to have a lot of control and I was not going to have a lot of producers getting in there. It was easier. There’ve been some home invasion horror movies, but the trend has been supernatural, but it’s cool to get something like this out. I had the tools to do it and I had the elements. My first five films were super grounded in reality and they didn’t have any kind of supernatural elements. I wanted to come back and I wanted to make something here in Mexico City and see Mexico City and feel the textures of the things I see here. I wanted to make a more realistic story with this background.

You mention trends in horror, and I don’t exactly want to call you a horror filmmaker, but is that how you see yourself?

Yeah, absolutely. There’re a number of directors who use the horror medium to get somewhere else, but truth be told I’m very comfortable doing horror. I feel like that’s what I want to keep making. Maybe one day I’ll change my mind. I like the genre. There are so many different things you can do with horror. Scherzo Diabolico is more of a thriller with some horror. I like to gravitate around the genre. It’s something I really enjoy.

Well, Scherzo Diabolico has a very revenge-driven plot, even though it doesn’t really kick in until towards the end. We know almost from the beginning that the main character is quite a bad guy. Say something about the revenge genre.

Absolutely. A couple years ago I did a rape revenge movie called I’ll Never Die Alone, and it was one of the most complicated films I’ve made because it was such a difficult subject and I wanted to be careful that it wasn’t exploitation. It was a very difficult line to walk through. Ultimately, I realized there were elements about revenge that I didn’t explore the way that I wanted, so I tried to come back on this and try it again without the rape element. I had to try to figure out how to make it work better. It was a good thing. Some of the reviews and promotion on this has revealed a little bit too much about the revenge. I think that should come as a surprise. If it works well you’re not going to know exactly where the film is taking you.

This is a very specific kind of movie, so who is this film’s audience?

This movie can work on different levels. People who are not used to seeing horror films, they can enjoy it. They can understand the drama and the situations the characters are going through. It’s a story that can be understood on a basic level. Without the kidnapping and the gruesome elements, it’s a very basic story. People in general in their 30’s and 40’s who are pushed or feel pushed by society’s standards to achieve perfection at any cost … I think that’s something that people can relate to. It can work also for the horror genre, for fans that like these kinds of movies. It’s respectful to them. I always try to do things that are respectful to horror fans. I hate to see movies that are just cliché and silly. I tried to make something that appeals a bit more to them. That’s what I wanted to do.