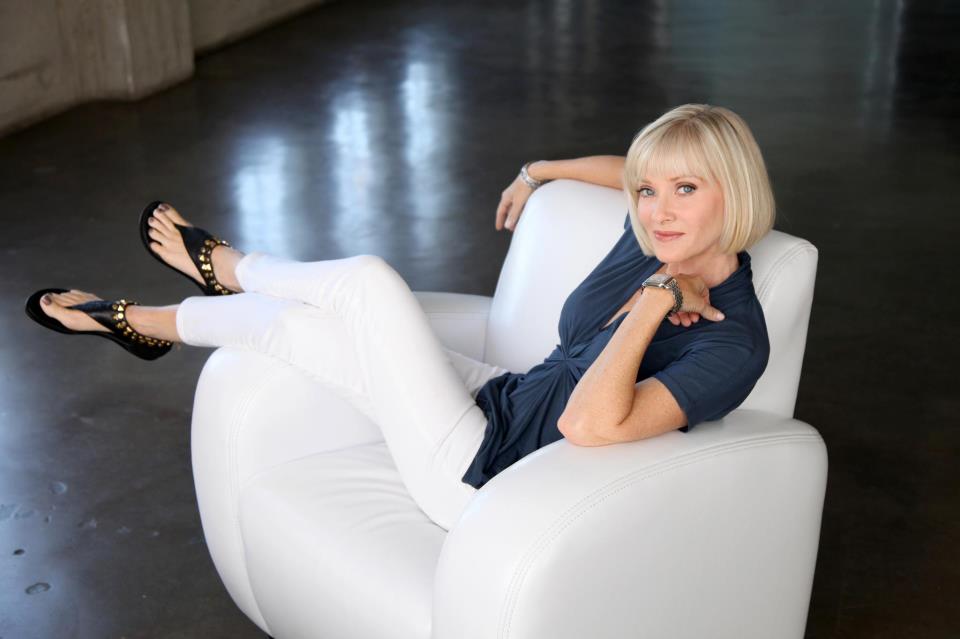 Though she may not seem like it, Barbara Crampton is one of the truest and best scream queens of modern movie history. Due to her standout performances in Stuart Gordon’s triptych of horror Re-Animator (1985), From Beyond (1986), and Castle Freak (1995), Crampton etched her cult status forever after. After lying low for a number of years, she made an auspicious comeback with the lauded slasher film You’re Next (2011), which really kickstarted her cinematic comeback, and this year alone, she’s had a number of well-received horror films, including Ted Geoghegan’s mature haunted house movie We Are Still Here and the anthology picture Tales of Halloween.

Crampton, who has found her niche in horror films, discusses her career, her comeback, and her love for her fans with the utmost sincerity.

You’re known for being a scream queen of horror, but what’s so cool is that you’ve made a comeback in the last few years. You’re all over the place.

I know! I’m so excited about it!

How did that happen?

I don’t know how it happened! It’s a surprise to me. My husband and I had two kids and we were completely immersed in family life, and I’d moved away from Los Angeles during a time when I wasn’t getting many parts. I was thinking about reinventing myself and doing something different with my career. Every actress laments that when you get into your 30’s the roles just dry up. I wasn’t concentrating on my career. I think it was maybe ten years after that when I got a call from my agent in 2011 to be in this movie called You’re Next. They didn’t want to meet with me or talk with me, or anything. They just offered me the part. It was going to happen like 10 days later. I happened to be on a ski trip with my family and I read the script on my iPhone. I thought the script was really fun. I did that movie for fun because motherhood is hard and acting is fun, so I thought I’d go in and do this movie and get a little taste of my old life and that would be that. Then that movie just turned out to be so wonderful and created a bidding war at the Toronto Film Festival where it premiered. So, I think because of that people realized that I was still alive. I had aged a little bit and was a mother myself, but people just started calling me. I was just lucky. It could have been any one of my friends that I worked with in Hollywood in the 80’s. I just happened to get a really nice part in a really nice movie, and here I am working again.

I actually saw We Are Still Here when it was released theatrically a few months ago, and I was thrilled that you had the main part in the film. The movie is about your character and her husband.

What was that like for you to get the lead role in this fantastic film?

I know, very surprising. I became friends with Ted Geoghegan, who directed We Are Still Here while he was moonlighting as a publicist on You’re Next. He said that he’d had in his mind that he wanted to give me a bigger part than I’d had in awhile. He also wanted to give Larry Fessenden a nice role that could show off his talents. I just think he wanted to do a movie about an older couple. Let’s face it: the younger people are the moviegoers of today – between 14-30 years old. People are giving those people the product that they can make money from. It’s nice to see an older couple and what their lives are like and what goes on. Ted was very generous to give us that chance and that opportunity. It was really gratifying to have such a nice role that I could really sink my teeth into.

Do you feel comfortable in the horror genre? I’m sure you don’t seek out horror films, but somehow you’ve gotten into a niche there.

I think that’s true. When I was a young actress in Hollywood I went to auditions for whatever my agent would put me up for, for whatever it seemed I was right for. So, I did a lot of soap operas. I did 12 years of soap operas. I did some commercials, I did movies of the week, some movies that weren’t horror, but I think probably because I was in Stuart Gordon’s Re-Animator, that made my connection to the horror genre. Even then, I wasn’t really seeking it out. I did more movie movies with Stuart because I wanted to make more movies with him. It wasn’t because I wanted to do another horror movie. I wasn’t one of these people who grew up watching horror movies. I feel like I’ve come to love the genre and I probably only realized after coming back with You’re Next that I’m part of a community that I didn’t even realize that I belonged to. When I came back with You’re Next, all of a sudden I saw that the way these people sell these independent movies now, is that they have to sell them at film festivals. Also, the way that people get to meet their favorite actors is they meet them at conventions. So I started going to more festivals and going to more conventions. Through social media, I saw that there was a whole community that’s really connected that’s really friendly and warm and welcoming. I thought, This is my home. This is what I love to do. I love the excitement of horror movies. I like to be scared myself. I love the high drama, the high concept that we get with horror movies. It’s definitely something that I’ve come to embrace just in the last five years or so.

You’ve got another one coming out called Sun Choke. Is there anything you’d like to say about that one?

It’s a very interesting movie. It’s very dark. It’s almost as if Lars Von Trier were more depressed than he already is. It’s about three women, and I am a woman who takes care of somebody who’s mentally unstable. I’ve dedicated my life to her. When she’s more unstable, there’s another character that she becomes fixated on that she’s sort of stalking. The story is really about how the three of us interweave with one another. It’s quite compelling and a richly textured psychological drama. We’ve been showing it at a number of film festivals all over the world. I’m hoping that’s going to get sold. We don’t have distribution yet.

You’ve worked with some really interesting directors over the years. Is there anyone you’d like to work with that you haven’t worked with yet?

I’d love to work with Don Coscarelli if that was a possibility. I’d say that’s probably the one that’s highest on my radar right now. He’s not doing that many movies, but I really like his style and his fantastical sense. He’s a really nice, great guy. He seems like he’d be really fun to work with.

I just watched Tales of Halloween, and you have a little bit in the movie. It’s not much, but it was nice to see you in that segment that also had Stuart Gordon, Lin Shaye, and Mick Garris.

Oh, that was so fun. I became friends with Axelle Carolyn over the last few years, and she produced this movie with Mike Mendez. She asked me to be in a little part in her segment, and I didn’t care how big or small it was. I wanted to do it because she’s a budding female filmmaker. She’s terrific and wonderful and has a great sensibility for horror. She wrote a beautiful little story. All the tales are wonderful, but hers in particular I think is really good. It was fun to work with all my old friends. It was a party scene and we were kind of acting like it was a party, so it was a fun little segment to shoot. I wanted to do it to support her and the movie. I saw it in London, and I think it’s very good. All the segments are solid and different. They have this through line of one night on Halloween. It’s interconnected. It’s funny and it’s scary, and it’s gory. There’s so much life to this movie.

I’ve got to bring up a little action movie you did called Cold Harvest with Gary Daniels. That was an Isaac Florentine film. I’m a huge fan of those guys.

We shot it in South Africa. That was a fun movie for me to do. It was an action movie, but of course I was the person who had the least action to do. It was fun working with those guys. They were great. That’s a whole other genre that I don’t have much connection to. I had a great time.

You also just had another film come out, the post-apocalyptic movie The Last Survivors.

Yeah. I had a little cameo in that. My friend Tom Hammock, who was the production designer on You’re Next, directed the movie. I felt like I was working with family again. I only worked on it for a couple of days. It’s a really clever and beautiful movie.

What would you like to say to your fans, Barbara?

I want to say thank you for letting me scare you all these years. I want to say that I’m happy to be back and working again as an actress. I’m helping people produce movies too, and that’s really fun and gratifying for me. It’s great to meet all these budding young filmmakers who, I guess, grew up watching my movies. They’re now giving me jobs. I’m really glad to be back and entertaining people. Thank you for having me.