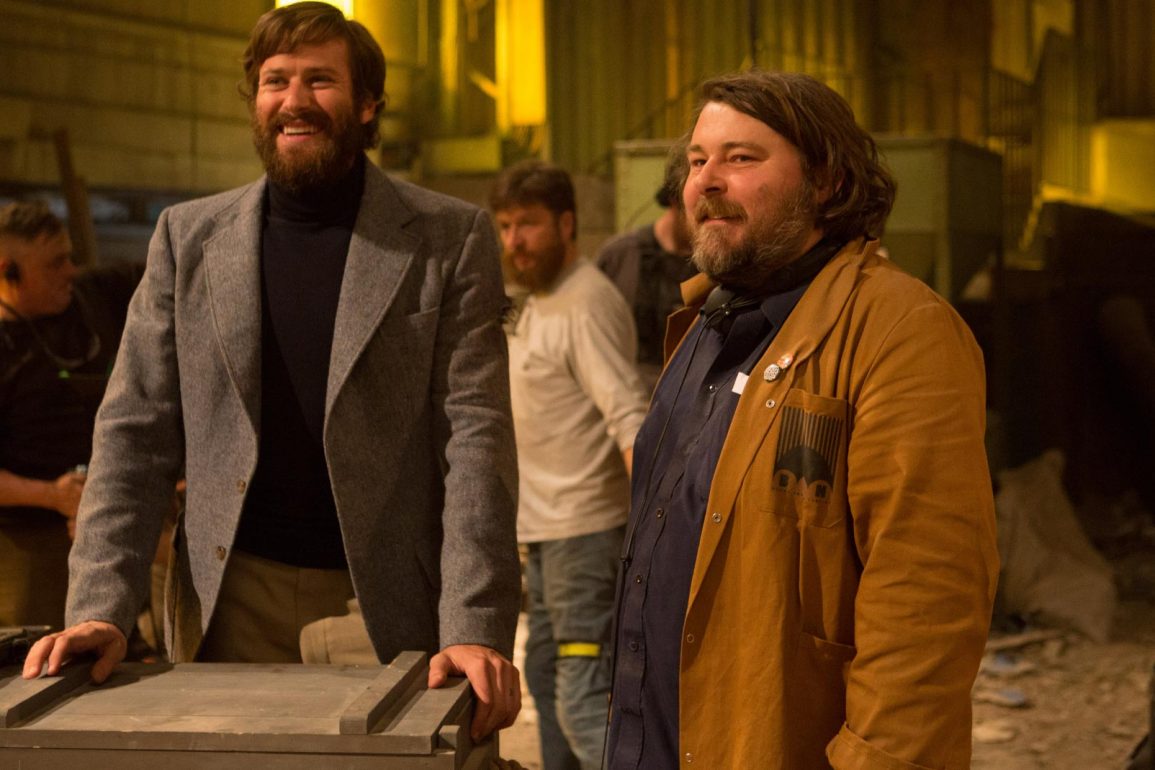 One of modern cinema’s most radically unique filmmakers, Ben Wheatley’s oeuvre is like a collective from the work of a brilliant madman. With a keen eye for the mundane humor in ghastly horror, his films Down Terrace, Kill List, Sightseers, A Field in England and now High-Rise, are all radically different from one another, but his stamp is emblazoned on each work, and he remains an incredibly fascinating filmmaker whose subversive work in the horror and dramatic thriller genre is all his own. His latest film High-Rise is his biggest film to date, with a size and scope much larger than anything he’s worked with before and, as ever, it’s a polarizing piece of genre cinema that fits perfectly alongside his previous works. In this interview, Wheatley discusses his work as a whole, and specifically the challenges of making High-Rise.

High-Rise is a much bigger film in scope and scale than your previous films. Talk about the challenges of putting this film together.

Yeah, technically, just the fact that it’s an ensemble film is cool. To juggle – just in scheduling – that many actors of that caliber … everyone is busy and they’re doing lots of other jobs, so your schedule becomes absolutely shredded. We had to shoot Jeremy Irons out first. The first month of the shoot, we were dealing with all of Jeremy Irons’ stuff. When he finished, we had to go back to the beginning of the movie, so all the sets had to be put back together. We ruined the whole building, so then we had to redecorate it and ruin it again. In terms of working on a bigger scale, it’s more of a treat than anything else. It’s not a problem. It’s exciting to get to build sets and to be able to get to control the environments and to move the camera around, it was all an absolute pleasure.

Watching High-Rise, I was reminded of an early David Cronenberg movie called Shivers. I don’t know if you’re familiar with that movie. High-Rise, though, has a very apocalyptic feel to it. The lunatics have taken over the asylum, you know what I mean? Talk about coordinating and directing the mayhem we see in the film.

Yeah, obviously, the more chaotic the way things look on screen, the more controlled they have to be on set. It’s an industrial environment, and you can’t have people going totally crazy, otherwise people will get hurt. A lot of the chaos and the madness in the film is totally controlled. It has to be. There’s lots of storyboarding, lots of preplanning, and stunt work, and making sure that nothing happens to people. When you’ve got big gangs of people fighting, you just have to keep a real eye on it to make sure no one goes out of control. But, yeah. It’s a lot of planning.

Talk a little bit about your frequent script collaborator Amy Jump. She’s worked on a number of your other films. What were the challenges of adapting J.G. Ballard’s book?

Well, this film and the film before – A Field in England – she had the sole writing credit. I haven’t written anything on these two movies. So, our process is that she writes the script, it comes back to me, and then I read it and then we make it. It’s not like an idea of a director walking around in his smoking jacket and talking to someone, saying, “I want a scene like this,” or “I want a scene like that.” I really like what she does, and so the last thing I want to do is impose a lot of ideas because usually her ideas are pretty damn fine. On this film, it was solely her. We generally don’t have much discussion about it. This one played out quite interestingly. We sought out the rights to the book, and we sent it to [producer] Jeremy Thomas, and he’d been developing the book for 40 years, trying to get it made. They had a pile of scripts by lots of other scriptwriters; it was as high as a small child. Amy said she didn’t want to read any of them. She wanted to write her own script. She didn’t want to be paid, either. She wanted to do it on spec. If we all liked it, then we’d make it. If they didn’t like it, then that would be it; we’d walk away from it. That’s what we did. That was really freeing for everybody.

The project had been around for so long, and it’s interesting that you set the film in the ’70s when the book was written. You didn’t make it contemporary.

There are elements in the book that would be so broken by setting it today. The idea that there’s a tower block on the edge of town where people go out of control and can keep it a secret … it’s just something that couldn’t happen with social media. Everybody would be taking photographs of themselves, and there would be a massive crowd outside. It would be like a reality television star, and while that would be an interesting story, it doesn’t … it’s not High-Rise. It would have broken the book. We felt we didn’t want to do that. The other thing is that period movies and science fiction films are both, are kind of the same thing. They’re talking about now, but looking at it through a prism so that audiences don’t feel like they are the ones being told, so that it’s not a direct criticism of their lives. It’s much easier for everybody to take in the information that they are being given. I certainly think that’s true with High-Rise. It’s incredibly prescient and it’s talking about now, and yet we can give it to you so that it doesn’t feel like you’re being told off.

Something I really appreciate about all of your films is the music scores. The scores for your films are always really good. You usually work with composer Jim Williams, but this time you worked with Clint Mansell. He gave you a solid score for this film. Talk about the music in your films and choosing Clint for this film.

Yeah, I think it’s one of the great treats about making movies, to be involved with musicians and getting involved in those conversations. I’m not musical, per se, and I can’t play a note, but I love working with artists and they’re highly skilled in their areas. On this score, I met Clint through chatting with him online, on Twitter. I’d always loved his work. I think his score for Moon is one of the most perfect scores. It’s fantastic. I don’t think I would have approached him if I hadn’t had this conversation with him online. He just seemed too big to me, too famous, too successful. But since I met him online, he seemed perfectly reasonable. He was really excited about it, and he wanted to work on High-Rise. When we talked about the score, I wanted the music to feel bombastic and I wanted to feel the hubris and then for it to slowly become sick like the building, and I think that’s one of Clint’s great skills. He can write a beautiful tune, but a tune that is disconcerting and kind of makes you feel sad or really worried. That element, you can hear it throughout the score for this.

Your movies are difficult to classify. Some people call you a horror filmmaker, but you’re so much more than that. I don’t know where to place you. Where would you place yourself as a genre filmmaker?

I don’t think about it. It’s not my job. I think if I became self-reflective like that, my head would swell up and I wouldn’t be able to get through doorways. It’s the job of the critics to decide or work that out. If I think about it at all, I think about what filmmaking used to be like in the golden days of Hollywood where you’d get a guy like Howard Hawks who would make a horror film and a cowboy movie and a comedy and there would be no contradiction about that. You can jump from genre to genre and take your pleasures where you can find them. That’s what I’m hoping to do. I don’t want to stop with one particular kind of movie. The audience is a different thing. There’s a massive audience of people who want or enjoy art house cinema and they enjoy Hollywood stuff. You can like the Terminator movies and you can enjoy Tarkovsky without contradiction. There’re a lot of people who want things that are challenging as well as stuff that’s easy. I think they both can exist.

You’ve got another film coming out soon called Free Fire. Is there anything you want to say about that? It sounds great.

Yeah, it’s a movie that is much more action-oriented than the other films I’ve made. It’s much more “genre” with a big “G.” It’s set in the ’70s in Boston about a gun deal that goes wrong. It’s starring Brie Larson, Sharlto Copley, Cillian Murphy, and Armie Hammer, amongst others. It’s executive produced by Martin Scorsese as well. It’s like trying to get back to that muscular ’70s style. It’s a procedural look at a gun deal gone bad. It’s what it would feel like in real time.

Is there anything else you’d like to say about High-Rise and its upcoming release here in the U.S.?

Well, I hope loads of people go and see it! It’s had its release in the UK and it went pretty well. It’s really encouraging. I did a big Q and A tour with it. I went to 22 different cinemas and talked to the audience and saw what the audience actually looks like. They were happy to see a movie that was made for them, that they could sink their teeth into it. The actual box office went well, so it’s happy days. Without a broad release in the states, the film doesn’t really have much of a chance of breaking through, but I think the film will do well on its run here, and I think it will do really well on VOD as well.

High-Rise will be available on VOD on April 28th and will be released theatrically in the US on May 9th, courtesy of Magnolia Pictures.