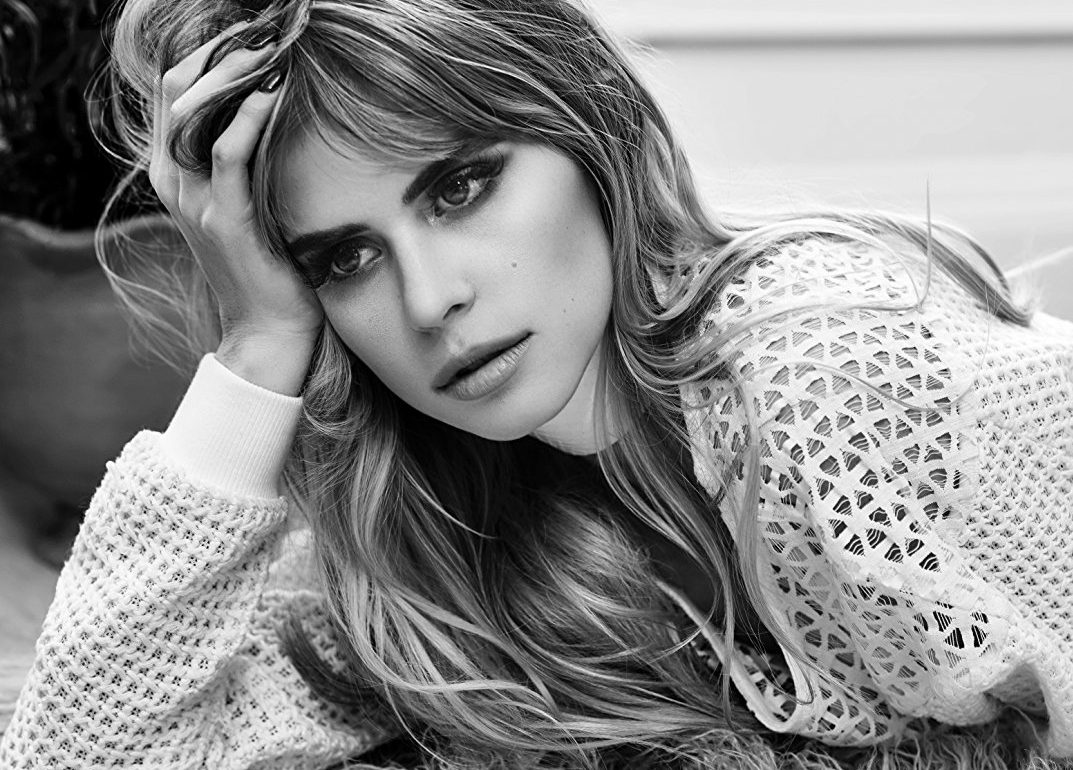 The ensemble slasher series Scream, based on Wes Craven’s film series, is a surprisingly great show, with thrills, comedy, and action in equal measure.

Actress Carlson Young plays Brooke, one of the leads in the show, and in this interview she discusses her character and the genre itself.

Young will reprise her role in Season 2, which airs on May 30th on MTV.

When it was first announced that there would be a Scream TV series, the reaction was less than enthusiastic, but as soon as the show aired, the show was almost universally embraced. Was there ever an “I told you so” moment for you when the tides began to turn?

Well, I don’t think it was necessarily an “I told you so” moment. It was just sort of a good feeling in that we really put our best feet forward and we put everything we had into it and tried to stay positive and hoped that people would try to form an opinion based on the actual show and not just the idea of the show. It felt good to have people form their own opinion and give us a chance.

Was the character of Brooke always the character you were attached to, or did you try out for other characters, and once you settled into Brooke, was it a good fit?

Oh yeah, I only auditioned for Brooke. That was my audition, and I know some of the other people had switched around their roles, but that was my thing from the start. I love playing Brooke. She’s such a fun character to play. There’s never a dull moment and there are a lot of good Brooke moments to look forward to in season 2. If I get a script and there’s something that maybe I don’t totally like about it, I just make it my own and make it “Brooke-ish,” whatever that means. I have never gotten anything that I absolutely dislike. The writers on MTV are pretty good at making my character great. I have good things to work with.

A lot of traumatic stuff happened towards the end of season 1. How will those events change your character for season 2?

Well, season 1 was an emotional rollercoaster, to say the least. Season 2 is even more so, I think. Everyone in that town is going through some really dark stuff, and I think at the beginning of season 1 with Brooke, you know exactly who she is, and I think all of those events by the end of that season, she’s become a completely different person by the time season 2 begins.

Your character starts out as this promiscuous, sort of hateful person and becomes a much more vulnerable, more relatable person by the end of that season. What’s that like for you to portray two wildly different extremes for the character?

Well, I have to say that after I saw the pilot, I thought to myself, “Wow! That’s a full 10! A full 10 popular girl,” but I made it my mission after watching the pilot to break that girl down and slowly but surely try to show different sides of this character. That was what I tried to do, and hopefully I was able to do that.

By the end of the first season, we know who the killer is, but there’s a bit of an open end there in the last shot of the 10th episode that leaves us hanging. Can you give a hint as to how the first episode of the second season opens up?

Everybody in this season has motives, more so than the last season. Whenever anybody dies, you definitely have to analyze the relationships. For instance, last season Kieran’s dad dies, and all of these things … it could be anyone. While Brooke might not be coming out as the killer at the beginning of season 1, the events of season 2 can put everybody back on the market in terms of killer.

What do you do to prepare to play Brooke?

I guess I get inspiration from classic femme fatale characters. What really came to mind is that she leads with her sexuality at such a young age. I found that really interesting to play with from a character perspective. It really reminded me of the character Audrey Horne, played by Sherilyn Fenn, in Twin Peaks, and I was already enamored with her and how she acted around men. I sort of tried to channel her, and I listen to good music, and that gets me in the mood.

Are you a fan of slasher films in general?

I’m a big fan of slashers. More so a fan of the horror genre in general, but I love slashers – who doesn’t love a good slasher? Typically, as of late, I’ve been attracted to the more quiet, indie horror. I’m a big It Follows fan. I just saw A Girl Walks Home Alone at Night and Honeymoon. I dabbled in watching the classic slashers, but I’ve really been loving indie horror. There’s a lot of cool stuff right now. Even the soundtracks are so good!

You never really would have thought that MTV would have had a powerhouse television show like Scream, but the way they work the music in the show feels really natural, even for a youth-centric type show. When you watch the episodes when they’re finished, does it add a fresh perspective to you when they’ve been set to music?

Oh, absolutely. Last season, when I was watching it … I was reminded of when I was a kid and would watch shows and love the music. I always want to know what song is playing.

Did you watch the original films that the show is based on?

Absolutely. Before we started shooting the first season, we all watched them and marathoned them for hours, all of them. On my own too. I rewatched them, if only to put myself in that world, to familiarize myself with the tone. I’ve seen all the Scream movies quite a few times. The first one is my favorite because I vividly remember the first time I saw it, and there’s something about it that I hold dear. When I saw it for the first time, I’d never seen anything like it before. It has a special place in my heart.

The TV series really feels blessed by Wes Craven. It feels like it has his blessing. Did you ever get a chance to meet him?

Actually, no. He was like a godfather from afar. He was sort of involved in the development of it, but it felt like he was a distant figure, for sure. We had this baby of his, and we were trying to take care of it the best we could. Hopefully we’re doing that.

What’s been your favorite part of working on this show?

My favorite part is getting to play such a fun character. That’s definitely a plus. My cast mates are some of the greatest people ever. It’s really fun to work on.

Scream: The TV Series Season 1 is available to own on DVD, and Season 2 premiers on May 30th on MTV.