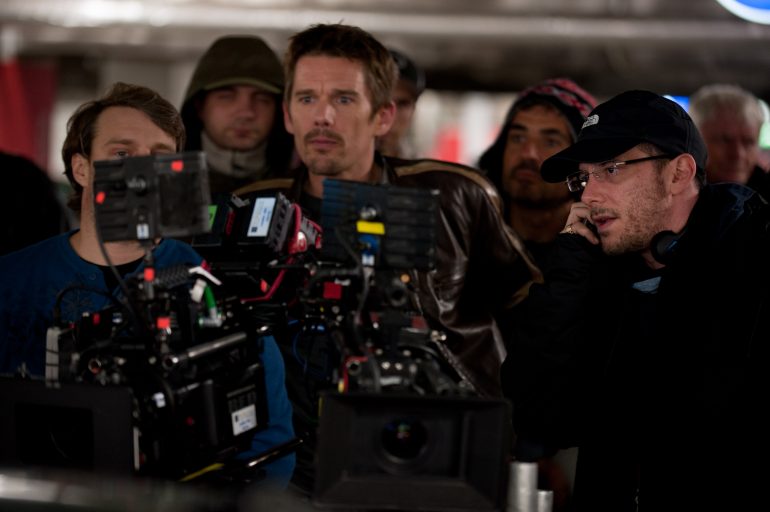 Writer / producer / director Courtney Solomon came on the scene with an auspicious directorial debut with the feature film adaptation of Dungeons and Dragons (2000), and he’s continued working heavily within the realm of genre films, going on to write and direct An American Haunting (2005), which launched a new brand of horror under the banner “After Dark Films.” Since then, After Dark has become virtually a household name with their annual “8 Films to Die For” series. Since 2006, After Dark has put on five theatrical After Dark Horror fests and one After Dark Action series (also theatrical), but the brand went quiet on the theatrical front until the label was relaunched this past week in a handful of theaters across the country.

8 Films to Die For is back, and producer Courtney Solomon, who has been busy over the last several years with directing the Ethan Hawk-starring action film Getaway (2013) and forming a new company called Cinelou, which aims to produce dramatic films, took a moment to give some updates on the After Dark Horror and After Dark Action brands.

Let’s talk about the “After Dark” brand. I remember when you first started the “8 Films to Die For” in 2006, and it was everywhere. Each year after that the series got smaller and smaller in terms of reaching a theatrical audience, and then it went away, but now it’s back. I’m glad you guys are back, but why so small on the theatrical front this year?

We might do it differently next year. The first launch we did for After Dark Films was An American Haunting, which was my film. I wrote, produced, and directed it. We put that out wide ourselves. Instead of just making it, we also released it. It did quite well. Then we came up with the concept of 8 Films to Die For, and to launch the brand in the first place, we spent a lot more money – we raised a lot more money – and we made a big event of it. We put it in more theaters, and it was all across the country. It did exceptionally well, and then we did much better in the ancillary markets. At then from that point, working with Lionsgate, we tapered off the marketing costs, and sort of made it more of a direct to video brand than a theatrical brand. Now [there have been some] interesting changes in the horror business since we started in 2006 to where we are today. So few horror movies from the studios go into theaters these days. Internationally, they don’t even get released. Most people who make horror movies can’t even sell off the international rights because there’s no who will play them. They won’t play them on T.V. in Europe or in Asia. Some places in South America, yes, but other places no. They’re not big enough to play in movie theaters. DVD business is dead pretty much everywhere in the world. The rest of the world hasn’t even caught up with VOD or digital like where we are in the States or in the bigger Western European countries.

It’s been a sad couple of years, really, for horror movies in general just in the business. There are literally hundreds of them that have been made and they’re not seen virtually by anybody. It’s a tough thing to put in theaters. There are some really good high quality ones that are out there, and in searching for things to relaunch the brand this year, we came across stuff, but we didn’t have enough time to do it right, if you will, to do a big campaign like we did with year one, so we put a pin with a certain number of movies for next year with the idea that we’d do to a big theatrical release of eight films, which no one’s doing anymore. Every Halloween you’ll see a few big ones that the studios put out like what Jason Bloom is doing, but it’s become a thing of the past. There’s a lot of great stuff out there, and we acquire them, so next year we’ll come back to where we started and make a much bigger event of it. If the movies are bigger, it justifies a bigger spend on marketing.

After Dark Action was a great concept. You got Jean-Claude Van Damme, Dolph Lundgren, Scott Adkins, and Cung Le for the first round. Are you planning to relaunch that brand?

We might. It’s interesting. In Cinelou, I’m partnered with Mark Canton, the producer of The Last Witch Hunter and 300. He loves action as well. We were discussing just a few weeks ago about that brand. We should really relaunch this and do this generation’s stars, not as a throwback tot he 80’s as we did with the first series. Maybe do a throwback to the 90’s and the first half of the 2000’s.

Who would those guys be?

We were just talking conceptually. But seriously, good question.

You already have Scott Adkins.

Scott goes without saying. We’ll always use Scott in the right film. He’ll be awesome. But he’s today. Mark did Escape Plan with Arnold and Stallone. On the basis of what the action festival is, if you have Arnold and Stallone doing cameos in a couple of the movies, that would be super cool. That would be a whole different thing. That’s what we were thinking.

How about Gina Carano?

She goes without saying. You’d be surprised: they’re out there, but a lot of the movies they’re doing never make it to theaters and they barely make it to VOD. In the VOD and digital world, it’s hard to find things if they’re not the big theatrical releases. It’s a busy market. Where do you look? How much are people going to search? The good thing about these brands is that people are already identified with them and it’s easy to couple some movies into a genre like horror and action. People know where to find it. There’s a ton of scripts out there. We’ve been focusing on Cinelou, which is more dramatic, Oscar fare. That’s how we’ve been building it for the last 17 months. By the end of the year, we’ll have seven movies in the can, all originally produced movies. We have three movies with Jennifer Aniston, Robert DeNiro, one with Eddie Murphy, all in dramatic roles. We’ve been doing that, and looking at this, we thought we’d pull our resources and relaunch the brand and make maybe three to five really cool ones, but launch it properly.

Re-Kill is one of the best After Dark movies I’ve seen in a long time. I’ve waited for this movie for years. What happened with this movie?

Well, we had one director – who was the original screenwriter – and he sort of left after day 1 of shooting. Val Milev, a very talent Bulgarian, was doing second unit directing on it, and it was a situation where we were already shooting, and we said, “Val, guess what? You’re being promoted!” He had an amazing short film he had done and a 12-minute reel for a short film he was trying to get made, and he’s a really talented guy. Basically, we prepped and shot that film in the most unconventional way. After we’d shoot, Val and I would go to two or three locations and prep with the art department and everybody else and get things done. Val didn’t speak great English, so I helped him in directing the actors just as a ghost. He had his vision of how he’d put the film together, and I helped him run the set. We just did it. We knew we were making a really cool movie. That’s why it took so long. He did a cut, and we needed to do a much longer cut of it, and he did a movie in between, and we stopped doing the After Dark festival, so then we put it on hold because we got busy with other things. Now that we’ve relaunched the brand, we finally got to bring it out. It was a real odyssey for this film.  We’re super proud of it.

You got Scott Adkins in there. He’s the best guy working in action movies right now.

Absolutely, he’s the nicest guy in the world.

And Bruce Payne, who was in your movie Dungeons and Dragons, amongst other things.

We’ve put Bruce in a lot of things. He’s a friend of mine. I like him a lot.

I liked your movie Getaway with Ethan Hawke.

That was a crazy little movie, man. Tight little movie, but a crazy one to make. We did all those stunts practically. Literally, there’s so little CG in that movie. We destroyed everything. It was insane. We used five different camera formats. We stayed there in Bulgaria for 50 days shooting stunts in the middle of the night in the freezing cold. We basically just wrecked shit. I like the movie, but critics didn’t like it, but it’s not a critic’s movie. All the fans love it. It’s a crazy ass ride. Ethan Hawke is a great guy.

Is there anything else you’d like to say about the After Dark festival this year?

We’re excited that we’ve finally relaunched it. We’ve done it. We’ve got a whole year to prep it for next year. It’s interesting that you asked about the action brand. We literally just started talking about it again. Maybe it’s a sign that you mentioned it. Next year we might even combine the two festivals when we do the release. Combine action and horror. I don’t think I could do eight and eight, but I think I can do eight and three, or five and five, or maybe four and four. We’ll figure it out. I just hope that people find it and enjoy it. This is the first year we’re doing theatrical and VOD at the same time. We used to get complaints that because we weren’t all over the country, people were upset that they couldn’t see it nearby. This is a way that people can see it right away all over the country. I hope it works this year.