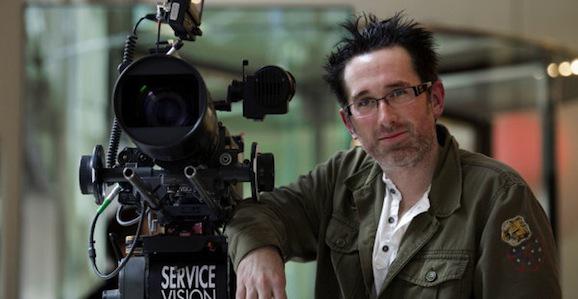 One of the few filmmakers working within the horror genre who strives to challenge himself by creating more than just “see it today, forget it tomorrow” movies, Darren Lynn Bousman is back with “The Night Billy Raised Hell,” a short segment in the anthology horror film Tales of Halloween, due out in theaters October 16th. Bousman, who has amassed an interesting list of directorial credits for films that range from the downright brutal (Saw II, Saw III, Saw IV) to experimental (Repo! The Genetic Opera, The Devil’s Carnival), is continually aiming to take risks with his work, and his unique style stamps each and every one of his projects, like it or not. In this interview, he discusses “The Night Billy Raised Hell,” and his past and future projects.

It does. I think that The Devil’s Carnival … it’s such a world that I want to live in. “The Night Billy Raised Hell” is down the street. That’s a good observation. It has all the same characters from it, and I think I’m a fan of the absurd and the over the top and of the serious and of the macabre. If you look [at my Saw movies], I was very particular with those. They were vicious and they were violent, but I think I have more fun with The Devil’s Carnival, with “The Night Billy Raised Hell” world. I have a kid now, and so my whole life’s changed. I’m more about laughing than I am into being brutally disgusted. I think what’s so fun about this is that it’s so campy and ridiculous and so over the top.

Talk a little bit about the story for “The Night Billy Raised Hell.” It’s a different segment in so many ways from all the other ones.

Halloween is about trick or treating. This is about the trick, not the treat. It’s about a little boy who goes trick or treating with his big sister and her boyfriend. They tell him “If you want to go trick or treating with us, you have to get the trick before you get the treat.” They ask him to egg a house in the neighborhood, and Billy ends up egging the house that belongs to Lucifer himself. Lucifer tells Billy, “Oh, you like tricks? I’m going to show you a trick you’re never going to forget!” Then he takes Billy on a crazy journey around the town doing horrible acts of violence. There’s a big twist at the end that I won’t spoil, but it’s a fun, cool twist that I hope the audience won’t see coming.

What’s it like to work with Barry Bostwick? I always enjoyed him in Megaforce rather than Rocky Horror Picture Show, but I have a feeling that the opposite goes for you.

If you want to talk to Barry Bostwick, you talk to him about Rocky Horror Picture Show. That’s the thing. I can just sit there and talk to him about Rocky Horror Picture Show every single day. Barry and I have become very good friends recently. He’s actually come out to the roadshow a couple of days on The Devil’s Carnival, which is awesome. Which is awesome! He is such a character. He’s someone that I look up to and admire. I grew up watching him. To be able to call this guy my friend is something special.

You’ve dabbled a little bit in the shot form over the last few years. I remember your segment in Fear Itself, which was one of the better segments – “New Year’s Day.” Talk a little bit about working in the short form a little bit.

What’s great about doing shorts – and even the first part of The Devil’s Carnival was just a few minutes long – is … it takes forever to get anything made; it takes years. There’s so much politics and bullshit. I’m dealing with a project right now. It literally takes out the fun of being an artist. You literally just want to die after dealing with some of the crap that goes on. When you’re doing something like Fear Itself or “The Night Billy Raised Hell,” it’s quick. It’s a quick in and a quick out. It’s great in that you don’t have to deal with the politics or the bullshit. You just go in and have a good time with friends. You can all sit back and toast to your successes. As opposed to something like Abattoir, which has taken four years to get made, and it’s still not out yet. Mother’s Day was a five-year process from beginning to end, and then it eventually got dumped. With “The Night Billy Raised Hell,” I met for that less than a year ago, I shot it, and now it’s out. It was a quick thing. It was fun. It reminds you why you became a filmmaker.

Just for the record, I went to see Mother’s Day at the Chinese Theater when it got that one-week release. I was very happy to finally get to see that when it came out.

(Laughing.) Well, you’re the one that saw it! Thank you very much!

What can you tell me about Abattoir?

It’s a movie I’m so proud of. It’s one of those weird movies only I can get made. When people watch it, they’re probably going to scratch their heads and say, “What?!” It’s so out of the box. It’s basically modern noir. It’s about a reporter who stumbles onto an urban legend about a man who lives out crime scenes. When people die in a house – whether it be murder or suicide or something else – he comes in and buys the house and rents the crime scene out. It leads to an investigation in this small town, and what happens in this crazy house.

I’m a huge fan of Repo! The Genetic Opera. It’s such a cool movie, man. You got into this kind of cult, niche, off the mainstream genre with that film.

What’s funny is that Terrance Zdunich, who played Graverobber in that, is actually right here with me right now and we’re drinking our sorrows away. Repo was special. It began in 2001 for me – with Terrance – and we started doing it at Black Box Theater in Hollywood on Hollywood Boulevard. It continued after I finished it. Terrance eventually took it to off-off Broadway in New York when he directed it. It was something that I told him that if I ever had a chance, that I would make it into a movie. Then I had success with the Saw films. So the chance for me to go back to my roots in theater, to make something weird, out of the box, and crazy … because as a filmmaker and artist 50 years from now, I want to be someone that took risks rather than be someone else’s bitch and make what they wanted you to make. I could have lived a very comfortable life making more Saw movies and things like that, but that’s not cool to me. What’s cool to me is making something that people don’t necessarily get, or absolutely love and tattoo their bodies with. That’s what Repo is. It’s not for everyone. It’s polarizing. That’s exciting to me as an artist, not something that you watch once and forget about two days later.

I like how you handle the apocalypse in Repo! It’s so different than any other apocalyptic film.

(Laughing.) Well, thank you! That was Terrance. He had gigabytes full of images he’d culled from year’s of making it that had this apocalyptic feel. We were like, “What’s our stance? How can we make it different?” We loved the simple idea, which is a very kitschy idea, but we both thought of it at the same time, which is that in the future, body parts can be repossessed. This was way before Repo Men ever came out. We decided that that was a very cool thing because it could happen. I also the love the extreme. I love Brazil, I love Blade Runner, I love A Boy and His Dog. These are movies where the characters are extreme. I wanted to make it a movie of the extreme. That’s why we have ridiculous costumes. It was a fantasy. It was an adult fairy tale.

With your Fear Itself segment, it didn’t have any connective tissue to any of the other segments, but “The Night Billy Raised Hell” does connect to the others in Tales of Halloween. Talk a little bit about how you were able to fit that in with the others.

One of the great parts about it was that we were all friends. We have great camaraderie. It gave us a chance to tell some stories, but we had to figure out how to connect all these stories. So that’s what we did. We did this awesome, linear thing with it. That’s something you don’t always see in a lot of anthologies.

How important is Halloween to you?

It’s the most important holiday of my life. I’ve had so many successes on Halloween. I’m not even talking about the Saw movies, which also opened on Halloween. As a kid, my father made Halloween the most special holiday in Kansas City. Haunted houses are huge. It’s not like Halloween Horror Nights; these were much bigger. The haunted houses are extreme and they’re massive. You wait hours to get in and they’re huge. There are mazes that you can be lost in for hours. Every single Halloween my dad would take myself and a group of friends all across Kansas City and do multiple haunted houses. We would get dressed up and go to these and then go home and then order pizza and watch scary movies. It became this obsession of mine that I would look forward to Halloween all year because of these rituals. It was something that was so important to me that I literally couldn’t sleep the week before. It was my Christmas. It’s a chance to dress up as someone you’re not and a chance to celebrate the macabre. I credit those moments to what I’m doing now. Otherwise, I wouldn’t be doing this.

Yeah, you’re very firmly entrenched in the horror genre. Would you be interested in doing something else, like say, an action movie?

I would love to if someone gave me that opportunity. You go where the work is. The work is in horror. If you have an action script, send it my way.

You’ve built for yourself a fan base, so what would you like to say to your fans?

Hail Satan! Listen, I have the greatest fans in the world because they’ve stayed with me this long, through successes and through failures. I’ve been on the road now for forty-some days for the roadshow of The Devil’s Carnival, and I meet people every single night. They’re everything. They’re the reason why I’m still here doing the job that I have. So, keep staying with me. I promise not to disappoint you.

Is there anything else you’d like to say about Tales of Halloween?

If you love Halloween, if you love the macabre, if you love dressing up like ghosts or ghouls, this is your movie. It hearkens back to when I was a kid, like Tales From the Crypt, Tales From the Darkside, Creepshow, and that type of movie, but interjected with modern insanity. It’s why I became a filmmaker, it’s why I fell in love with scares. I recommend you watch it with your friends on Halloween night and make it an annual tradition.