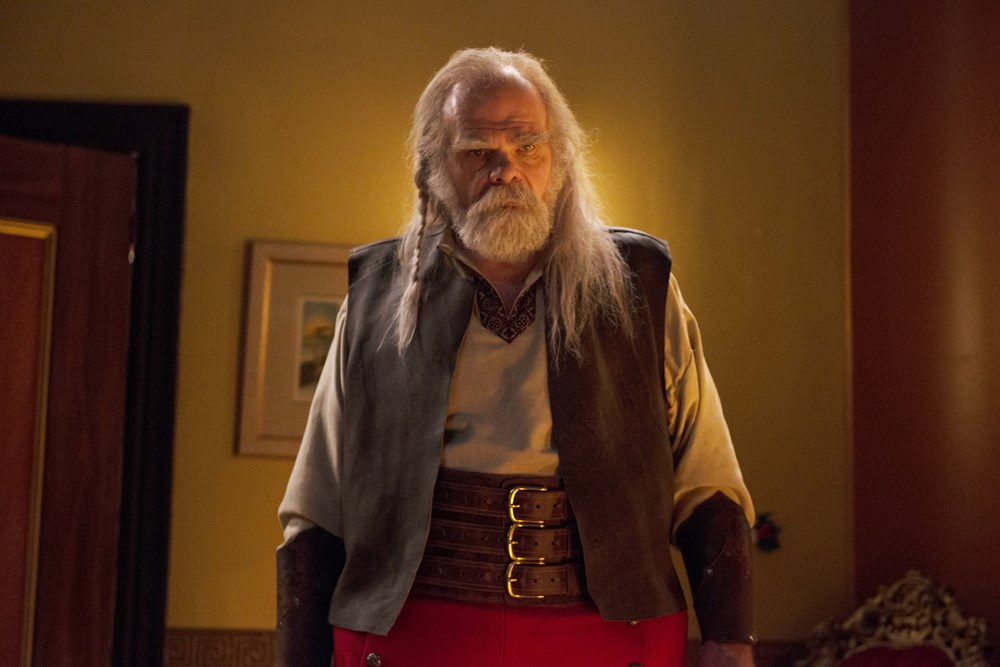 Out in theaters Friday, October 2nd is the high-concept anthology horror film A Christmas Horror Story that does something completely different with Santa Claus: It turns him into a midnight avenger on Christmas Eve, battling possessed elves and taking on the dreaded Krampus, a demon of the Christmas holiday. More action packed than the average horror film, A Christmas Horror Story gives Santa a heroic, world-saving angle, and as played by character actor George Buza, the role is personified by a pro who has, in fact, played Santa several other times in his prolific career. Buza, who’s been in some notable projects such as Quest for Fire, Busted Up, and the T.V. series The Adventures of Sinbad, once again proves that he’s a Santa for the ages, and a badass to boot.

I was looking over your IMDB credits and all the way at the bottom is a credit for Quest for Fire, which is one of the coolest movies ever made.

(Laughing.) And now we’re in another century! That was a hot movie, I’ll tell you. That was really early on in my film days. Being a part of that was such a thrill.

You’ve done all kinds of stuff since then. You were in a little action film I’ve always liked called Busted Up.

That’s right. You’re known for being a tough guy. I remember you were Sinbad’s brother in the T.V. series The Adventures of Sinbad.

That was another exciting project. We only ended up doing two seasons of that.

And now you’re in A Christmas Horror Story, which gave you the chance to play one of the most famous characters of all time – Santa Claus … again.

With a twist! Correct, sir. I didn’t want to give too much away.

This was a different Santa Claus than I’ve ever played. For one, we went through the Nordic version of Santa Claus rather than the Coca Cola-swigging guy. We based him on the European Saint Nicholas. And the Krampus, anti-Santa Claus character, has a battle with him. It was a completely different take on the story of Santa Claus than we’re used to in North America. I’ve played Santa in several Hallmark films. I did A Case for Christmas where they sue Santa Claus. I play Santa in that one. I also did A Christmas Switch where a guy wants to switch bodies with a young guy so he can play Santa one last time. I was the Santa that granted him his wish on that. I’ve played old jolly Saint Nick before. Not to mention, when I was in university that was my job at Christmas time, was a department store Santa. That’s a whole other story.

I’m perfectly at ease watching what I’d call Seasonal Slashers or Seasonal Horror Films – I like that stuff – but I don’t think I’ve ever seen Santa Claus battling demonic possessed and infected elves.

No, I don’t think anybody has!

I don’t think that’s ever been seen before. My jaw dropped.

I’ve seen guys dressed as Santa killing people in stuff like Silent Night, Deadly Night, but I’ve never seen him do the things he does in this movie.

Oh, this was definitely a good gore-fest!

You’re known for your physical attributes. You played Santa as a warrior. You’re not just sitting in a chair.

Yeah, there was a lot of action in this movie. There was more action than dialogue, to tell you the truth. That’s sort of the role I’ve always played. Ones that have a lot of action to them. You have to stay in shape to be able to be able to do all that stuff. The days are extraordinarily long. We were doing 16 hour days most of the time. When you’re fighting all the time, the days get even longer. On Sinbad, those fights would take all day to film.

Your fight with Krampus at the end is impressive. That’s what’s on the poster. It’s like the old days where they paint up a poster and say, “This is the movie we’re going to make: Santa vs Krampus!” Talk about filming that scene.

That particular scene was one of the coldest days of the year. Poor Rob Archer, who was playing Krampus, he nearly died of hypothermia that day. It was about 20 below zero and he wasn’t wearing anything but that loincloth and body paint and those big horns. I was lucky. I was wearing a full six layers of Santa garb plus long johns. Poor Rob was dying out there during that scene. That took a long time to film as well because it’s all done in tiny little pieces. There was some stunt doubling, but for the most part, it was me being dragged along the ground and taking and giving most of the hits. There was more doubling when we ran out of time and when they needed inserts of hands and little fine things that were done by second unit.

There’s a little humbug to me during the holidays, so, as I said, I can appreciate a horror movie set around Christmas. That said, who do you think the audience for this movie is?

Well, it’s hard to say. I’m a bit of a humbug myself. (Laughing.) I think that Christmas puts so much pressure on everybody. I think this is a nice alternative take on the whole thing. It gets you out of that department store theme, listening to all those Christmas carols. I get goose bumps just thinking about what they did with that opening theme, the way they arranged that Christmas carol. It had that deep, foreboding sense to it. It sells the spirit of the film. The film is a great antithesis to the feel-good Hallmark movie. I’ve done a few of those as well, but I’ve never had as much fun as I did on this one.

You’re a rare breed, George. You’ve lasted the test of time. A lot of guys drop off the radar after a handful of years of acting, but you’re still here, and not only that but you’re playing a lead role in a pretty respectable action-oriented horror film.

Well, that was always the goal when I started off on this career 45 years ago. It’s not as jam-packed as it used to be. They just don’t write good parts for guys in their 60’s like they used to. In terms of action, I don’t know if you’re familiar with the film Wild Geese …

Oh, sure. With Roger Moore.

Yeah, it was like the 70’s version of The Expendables. You get all these geriatric actors to do this action film. (Laughing.) It only gets harder as you get older. You’ve got to find a niche. Thank goodness for Santa Claus!

Do you have any final comments about A Christmas Horror Story?

I hope everybody goes out to see it and has a really good time. It’s a rocker!