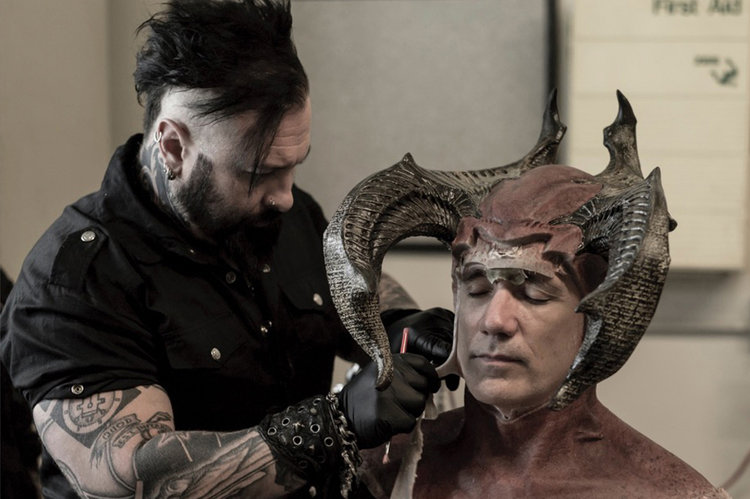 One of the key ingredients of making a big genre movie succeed is having convincing special effects and makeup effects, and Glenn Hetrick’s work on all four of The Hunger Games films is essential. On the first Hunger Games (2012) he worked as a prosthetics effects makeup designer, and then with Catching Fire (2013), Mockingjay Part 1 (2014) and Mockingjay Part 2 (2015), he worked as a special makeup effects artist, contributing to some of the most indelible textures and effects all throughout the entire franchise. Long embedded in the makeup effects industry in genre films such as Blade II (2002), The League of Extraordinary Gentleman (2003), The Chronicles of Riddick (2004), and Legion (2010), Hetrick’s body of work is a testament to his skill and imagination.

In this interview, Hetrick discusses his work on The Hunger Games franchise, and how his love of horror films and post-apocalyptic movies have given him some inspiration over the years as he continues to work in major motion pictures.

How were you able to adapt your love of horror movies to the more streamlined, big budget Hunger Games movies where there are some grotesque elements?

A lot of it has to do with all the many, many seasons of forensic procedural shows like Crossing Jordan, CSI New York, and some other shows thrown in there … so in doing all that realistic work, it certainly changes the way you approach everything, even when you build creatures. It’s very much about the realism. Also, the advent of full transition to full HD for everyone. There’s not a lot of latitude anymore for anything “less than” completely realistic quality. By the time I got involved with these films, it really wasn’t much of a hurtle in terms of the realism or anything. It’s very much like what we were doing. It was a bit more fun because you’re still in a dystopian, science fiction world.

Talk a little bit about that genre and getting into the fantastical aspects of that genre, as far as your work in this franchise goes.

We clear a few beats throughout, and I think that rhythm picks up in Mockingjay 2. Certainly with Cressida’s [played by Natalia Dormer] tattoos. She’s covered down the side of her head and the side of her arm daily. As was Messilla [played by Evan Ross] and his piercings. His ears are actually fake; in order to facilitate fake piercings we just used fake ears. I think a lot of people don’t notice that, which is good. That was something that had to be done every day. And then we get to the crescendo that, of course, is Tigres [played by Eugenie Boudurant], which is my favorite make-up of the film.

Being so committed to the integrity of the source material, the author was very involved in the creation. Between Suzanne Collins, [producer] Nina [Jacobson], and Francis Lawrence, there’s a very homogenized, solidified version of what they want. They’ve got all the elements of what it could be, so they give very clear direction. You cannot do it when there are creative gaps between the team that drives it. You can only be successful in something that is as complex and with this much scope if we’re all on the same page and are giving you specific direction and doing it in a clear manner. Francis is masterful at that. He and I have worked a lot of shows together. We have a great relationship and are friends off screen. That’s incredibly important because there are scenes that imply massive amounts of wounds and certain things I went out for, like Katniss [played by Jennifer Lawrence], but for the most part I was not on set. The success from all that comes from the way all this was set up. If it was any different, there could have been a lot of problems that we just didn’t have to deal with. Neville Page is a partner with me now, and we’ve expanded to 3D printing and all of that. He did all the Photoshop designs of Tigres. Those designs were used in the production pipeline by all the departments to work off of to establish wardrobe and hair and etcetera. Neville is a huge part of that process as well. Him and I explore first on paper, then on Photoshop, and by the time he was done in the Photoshop version, it didn’t change much from that. The patterns were established, the feline anatomy combined with the human anatomy was well established. Once we had that, we sculpted her out so that Francis could see her in a full 1:1 scale versions of the make-up on Eugenie’s actual life cast. He’d make notes from there. We just took it step by step. Everything changed when we got Eugenie in the shop for the first time. She was so amazing. She brought so much to the character. Just talking to her, you started to see her in the make-up. That drove a lot of the final creative decisions.

The Tigres design is truly incredible She deserves to be on the poster.

I wish! Thank you!

Tigres is certainly my favorite. In terms of complexity, technically, early on there was a gag in The Hunger Games with Glimmer [played by Leven Ramblin] getting stung by tracker jackers and then in Mockingjay 1, when we had all of them going into that insidious fog that caused them to blister up and subsequently heal when they hit the water … that was an amazingly complex scene because there are so many different versions of those blisters, big and small, that we had to create and could be reapplied in a modular fashion on the day so that they could shoot out of continuity. We had to establish so many different stages of make-up on so many different actors all in one day. Hopefully, no one ever thought about that, though. That’s the goal. The illusion is complete when you’re not thinking about it.

Say something about the post-apocalyptic genre itself and helping to simulate that genre within this franchise. Are there any reference points to any films that have inspired you along the way?

My head is just a library of stuff from all the obvious Mad Max movies and stuff. I love the genre so much. We were just talking about Spacehunter and Metalstorm. Of course, this is ’70s and ’80s sci-fi and post-apocalyptic … I love it all. There’s not a day that goes by where one of those films doesn’t influence some small decision. It’s not like I’m trying to recreate the make-ups, obviously, but it could be a tonal note or a little piece of integrated wardrobe that you remember from a film. Even stuff as cheesy as Megaforce. I love that stuff.

Glenn, if you found yourself as a tribute in The Hunger Games, do you think you’d survive?

Oh, I think so. I think I’d win at least one Hunger Games!