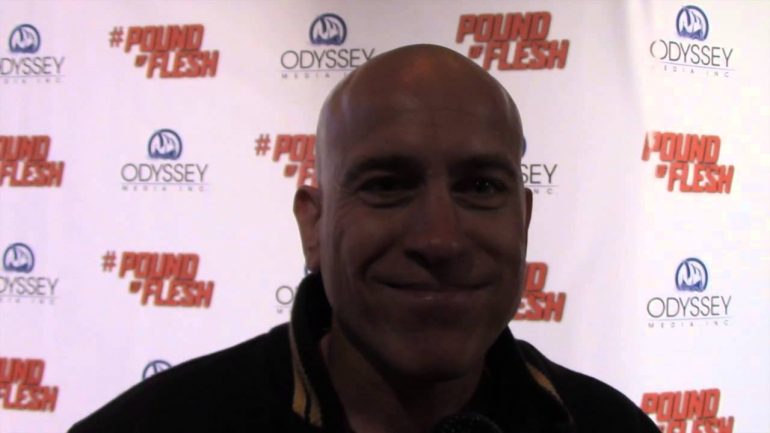 In the world of martial arts action films, there are few fight choreographers who have made indelible marks in the industry, and John Salvitti is such a man.

Having choreographed key fights scenes in Flashpoint, Special I.D., and Kung Fu Killer, all starring Donnie Yen, Salvitti is one of the best in the business, and his fight choreography in Ernie Barbarash’s latest film Pound of Flesh, is one of the key highlights of the movie. Starring action superstar Jean-Claude Van Damme, Pound of Flesh is the perfect vehicle for Van Damme, who plays a character that has a kidney stolen from his body (you read that correctly), and he spends the rest of the film taking on a cadre of villains in his quest to reclaim it.

The story alone gave Salvitti a challenge as he had to work around Van Damme’s character’s disabled condition, and with some MMA and Jujitsu moves, he was able to adapt Van Damme’s own signature martial arts style to fit the film’s story. Here, Salvitti discusses his work on the picture:

For your choreography in Pound of Flesh you use Jujitsu and some MMA moves, which is different for Jean-Claude. He says that Jujitsu is difficult for him, but that he appreciated the challenge. Did you have your work cut out for you in choreographing the fights for this film?

We find the combat for the choreography. You never know where the fight might go in a real-world situation. I love his spaghetti analogy. It can go anywhere. It’s an awesome description. He would understand that better than most. He’s been there so long. You have to be able to switch things at the turn of a dime. A guy is throwing punches, he might go and grab your ankle suddenly and break your ankle. The next thing you know, you’re falling off balance. You can’t punch anymore. Suddenly the spaghetti analogy … it’s uncontrollable. The fight is going to move in different directions. That’s how the choreography is born. I have to force myself as a choreographer to think like that.

What’s different or cutting edge about the fight choreography in Pound of Flesh, in terms of measuring up to all the other stuff that’s out there right now?

Audiences are so keen and hypersensitive to combat and to action. They know what’s real. They see it now. That brand of “real” – whether it’s in The Avengers or in Pound of Flesh, they know it. That’s what makes MMA so special. Whereas in boxing – which I love – you have your gloves, but the referee is going to break you apart. There’s a reason why we love boxing: The purity of the punch, those combinations they have, and the footwork, and the body movement.

This was your first time working with Jean-Claude. Say something about that.

You also got to work with Darren Shahlavi, who recently passed away, on this picture. Talk about working with him.

Ernie Barbarash, the director of the film, has spoken very highly of your collaboration on this project. What are your thoughts on working with Ernie?

Ernie is an awesome director. He’s a teammate. He got his hands dirty right along with us. He’s inspiring. He never wavered with me. He came to all my rehearsals.

Pound of Flesh has a great moment at the halfway point for Jean-Claude to do his signature splits on the side of a car. How were you able to work in his splits and some of your fight choreography for this scene?

In the script, there was a particular moment that was a little non-descriptive as far the car fight. It was written as a knockout punch kind of a thing. I said to Ernie, “I might have uncovered something here … for the splits! What if there’s a little combat going on here? Let’s get some strikes and punching working. The more I talked, the more Ernie got excited. Then, as the car’s moving, how do you like the idea of him doing the splits? Ernie was like, “I love it!” Jean-Claude hadn’t done the splits in a movie in a long time. That’s how that worked.

This movie must have given you some challenges because Jean-Claude is playing a character who is essentially handicapped. What were your thoughts on initially coming on board this project? How did you approach the choreography from the story standpoint?

I’m a martial arts choreographer in the traditional sense of the word. There’re a lot of expectations for the fan base. You want to push all those buttons, but ultimately the story dictates what the audience will be. It’s basically an action thriller more than it is a martial arts action film in the traditional sense. I actually worry a little bit, because people might say, “Where’s the three-minute fight?” It would be out of character to have these longer fights because Jean-Claude’s character has a missing kidney.

We were always striving to be believable so the audience doesn’t go, “Oh, that’s not believable.” We’re already pushing the envelope a little bit, so the long fights aren’t meant to be … when I designed these fights … it was like five or six fights … I tried to be one whole piece of action. Each fight was a piece of a bigger fight. The action is really character-driven. I felt for the characters. I was happy that I felt for them while I was making the film. It helped me to engage in my choreography. Let’s tell a story through the fights. He had surgery, he’s on morphine, so we had the opening fight where he jumped a little bit, but later we kept him more grounded for a reason.

BEHIND THE SCENES OF POUND OF FLESH

You’ve worked with some of the best action stars in the world, including Donnie Yen and Wesley Snipes, but coming into something with Van Damme, do you think you’ve given his fans what they’re hoping to see?