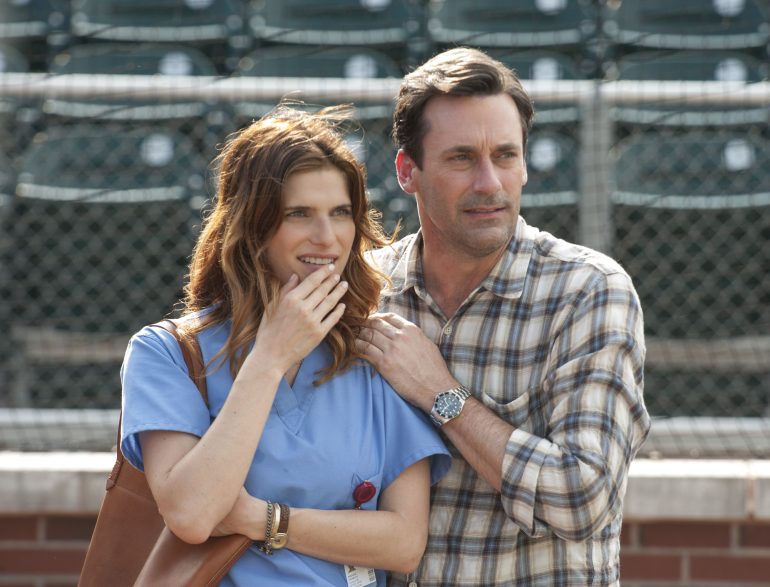 "MILLION DOLLAR ARM"..149_MDA-10839R-149..Jon Hamm as JB Bernstein and Lake Bell as Brenda, JB's neighbor and friend watch the boys pitch at USC. Walt Disney Pictures' "Million Dollar Arm" is the incredible true story of two young men who went from never throwing a baseball to being given a shot in Major League Baseball...Ph: Ron Phillips..?Disney Enterprises, Inc. All Rights Reserved.
0

The new hyper-intense thriller No Escape from The Brothers Dowdle (the filmmakers behind Devil and As Above, So Below), stars Owen Wilson and Lake Bell as a couple who brings their two young daughters – played by Sterling Jerins and Claire Geare – to Southeast Asia, as a plan to relocate their family. Early on in their trip, the country undergoes a coup in the government and the city soon becomes a horrific hunting ground of both foreigners and sympathizers, and in no time at all the American family is forced to go on the run from an entire city full of murderous hunters. Former 007 Pierce Brosnan plays a supporting role as a mysterious (and comedy-relief) character that comes to the aide of the family who desperately need his help.

Actress Lake Bell (from Black Rock and What Happens in Vegas), who has experience as both a writer and a director, shares her thoughts on her time on the Thailand set of No Escape, and specifically about her character and the physicality of her role.

After seeing you in Black Rock, it was obvious you were capable of doing action. Here you really amp it up. You’ve earned your action badge. You rock in No Escape.

Thank you. I appreciate that. Doing this type of movie is a departure from the types of movies I’m used to doing. I think – yes I did Black Rock and I’ve dabbled in action a little bit – what was so appealing is … and it’s part of what I do for a living … is that you get to take on these different roles in different genres. I help realize someone else’s vision of what they see – especially as a filmmaker, and I appreciate that. Not only did this offer that, but it took place in a part of the planet that I’d never been to. This is a type of story that I’ve never been involved with. It was a huge opportunity for me. The mamma bear thing is a new chapter of my life. I wasn’t a mom at the time when we were shooting this, but I’m a mom now.

When you have a baby, there is something so all-encompassing about this surge of energy you have to protect.

What’s really interesting about that is when you have a baby, there is something so all-encompassing about this surge of energy you have to protect. It’s animalist, this charge that you have. When we were shooting the movie, the director and I talked about that quite a bit. It’s very easy to look at the two girls – Claire and Sterling, who beautifully play these parts – to look at them in the situations we were in. These little girls were such phenomenal actors. They were sweet little girls in an exotic land. Even though we were pretending, it was still three or four in the morning and there were rain machines and it was cold, and there’s shit and mud and everything. It’s not like, “Let’s put down movie mud.” There’s literally a grungy location, and there are insects and snakes and all kinds of things. It was helpful to not complain because the girls were not complaining.

Is it helpful to not be prepared for crazy situations like dealing with mud and bugs because that’s something your character would actually have to deal with?

Well, yeah. Part of this – and actually Black Rock too – it wasn’t like we went into rigorous training before we went and did the movie. Perhaps I could have, but we shouldn’t look like we are action stars. You should be real people. What tools would you have to get out? You have thyself! Your brain and your body, that’s all you have. You can get creative to find ways to survive, but I love the way that this film is written. It’s a little messy. We don’t all of a sudden know how to MacGyver something into a shotgun.

How did filming this movie inform you as a director? You must have looked at this experience as a director yourself.

What I love about doing movies that I would never make as a director and rarely get to make as an actor is that I get to see it as a filmmaker, but I get to see it from the inside. I respectfully take on the job as an observer. This is the type of beast of a movie that I do not know anything about. When I shoot on Children’s Hospital, we shoot 11-minute miniature action movies where we go, “We’re going to do a miniature version of Hannah with spies!” All of that is just mini-boot camp. No Escape is an education. This is a college-level course on action moviemaking. It’s how I learn to make movies. I welcome these opportunities. It’s a front-row seat on how to do it. I would have no idea how to shoot a helicopter careening into the top of a building. I just don’t know how to do it.

It’s nice to have directors on set who are smiling all the time – especially considering the nature of what we’re shooting. My mom came to visit the set and she said, “Gosh, they’re smiling all the time – why the hell would they come up with such a terrible idea! It’s so terrifying! They must be demented!” They had a myriad of cameras running all the time. They juggled pyrotechnics, and they had a predominantly Thai crew. The juggle of it was impressive.

Talk a little bit about working with Owen Wilson. It’s been awhile since he’s done an action-type film.

It’s kind of genius casting. You have Owen and myself – you think having us in a movie will perhaps be funny. It gives you a sense of calm in the beginning. It can’t get that bad. Then, it gives the audience a false sense of security. Within seconds it gets so bad. It’s a very unique way to cast, and kind of refreshing. In a different scenario with perhaps different actors, you’ll already know it’s going to get bad. But with Owen, he’s so great in this movie. I’m really proud of this movie and I hope he’s super proud of it. He has the commitment and the confidence in his performance. We’re going to go there. I was thankful to be able to work with him on this.

How much of a comfort level did it give you to know that you had James Bond – Mr. Pierce Brosnan – on set?

He’s just a consummate movie star, and so handsome. Right? Even in his ruggedness he’s so cool looking. I do feel like we had a confidence with him there. In the movie I was like, “I don’t know about this guy – he’s dodgy.” Then all we want to get to Pierce. “Let’s get to Pierce Brosnan and we’ll be okay!” I love seeing Pierce in this. He’s the karaoke-singing rugged funny dude.

The Dowdle Brothers are known for making great horror films. Say something else about working with them on this project.

They come to work every day with a smile on their faces. They’re the best laughers. It’s so bizarre – the combination of being so full of levity in real life, but something happens when they take to the pen where they get so dark. It’s just the most interesting combination. That’s why they bring so much real human spirit to the characters that endure these high-stakes situations. Part of what’s so unique about this movie and what they do is that they put great care into the characters that are experiencing these extraordinary circumstances. It’s not like, “Oh, this couple who have some faceless prop kids got into a situation,” no. These children have nicknames and opinions about things. They are children you know, so that when the action happens you are very much invested in what happens.

Did you get to explore Thailand a little bit before filming?

We didn’t have too much time before, but I got to explore after filming with my husband. There’s an elephant sanctuary that we went to numerous times. This is a place on the planet where you can do that. I thought I was only going to go once, but I kept going back. It was one of those moments that just brings you into the reality of … nothing else matters when you’re in the presence of these grand creatures. What’s Twitter? Nothing matters except these animals.

Do you think your performance would be different now that you’re a mother?

I don’t think so. I’m just a compassionate person. When a child is at risk, you have that instinct. It’s just – as animals – we protect those that are helpless. I really lent into this idea of momma bear early on. Even in rehearsals. Claire and Sterling were so endearing. They were so sweet and innocent. It made it very easy to make me want to protect them. Even in shooting, I was like, “Can we get a warm towel for these girls?! Guys! People!” It’s funny because Owen and I were talking about this. When it’s just you, you have less responsibility to yourself in a way versus when you have this very innocent being that you are wholly responsible for, that you brought here. Their helplessness invigorates and inspires a strength that I don’t think I would have on my own. We’re all kind of a little self-involved in this industry. We make these movies and we’re like, “What am I gonna wear to this and that?” It’s all bullshit, right? It’s a fun thing that we do, but when you have a baby it does crystallize what’s important. It helps sift through a lot of bullshit. It’s a thousand percent not about me. It’s about this person that I brought into this world. It’s the first time in my life … Owen and I were talking, “Oh, my God, I hope my car doesn’t crash, I hope my plane doesn’t crash, I better look both ways before I cross the street or something will happen to me!” We spend so much energy thinking, “I hope something doesn’t happen to me.” All of that is … if there was a car coming and was going to hit my child, I would throw myself in front of it easily and die. There’s just a change. The world doesn’t revolve around me. It makes me emotional.