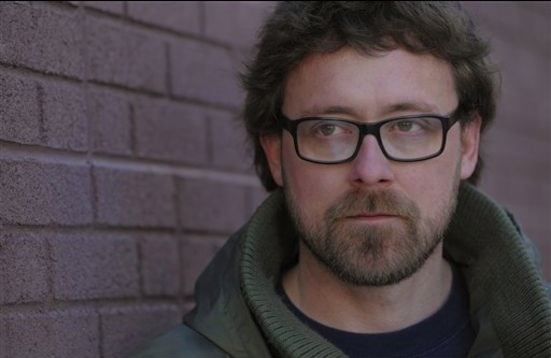 The one name in horror everyone should be paying attention to is Lucky McKee. His first film May (2002) quietly entered the stratum of independent horror and easily blew the genre up with its quirky intensity, and the film left an indelible and deeply sincere impression that has since carried through as McKee has continued working and creating some of the most interesting and complexly layered films in the genre. His movies The Woods (2006), Red (2008), The Woman (2011), and All Cheerleaders Die (2013) were each fantastic movies that proved how versatile McKee is while working within the horror stratosphere.

His Masters of Horror segment Sick Girl (2006) showed that he works well with comedy, and now in his segment “Ding Dong” in the anthology film Tales of Halloween, he once again shows off his incredible prowess as a fascinating filmmaker intent on leaving his mark wherever he treads.

I’ve got to tell you that I’ve been a fan of yours since I saw May theatrically in Westwood when it was playing at that theater in the mall when it was first released. It was the only theater in Los Angeles that was playing it. I’ve followed your career ever since. Big fan.

(Laughing.) Oh, gosh! I heard that wasn’t a very nice theater. I was out of town when it was playing.

I actually sat through it twice in a row. I just watched Tales of Halloween, and your segment Ding Dong was so good, man. Your segment really had your touch. It was a great little piece.

That’s really nice of you to say. Everybody kind of did their own thing. The movie is a really cool compilation album, like a mix tape. There’s going to be certain songs that people really like, but I’m glad you really liked mine. The movie is cool because it has so many sensibilities, so many different points of view.

Ding Dong is a really off-kilter modern dark fairy tale. Talk about your inspiration for it. Pollyanna McIntosh, whom you’d worked with before on The Woman, is so cool in this piece.

She’s phenomenal. After working with her on The Woman, I had such a fantastic experience with her. I thought it would be cool to work with her again where she wasn’t covered in mud and filth and stuff like that. I just had this image of her with a red face with her awesome teeth and her great smile. It just stuck in my head so we went from there. I came in on this project last, so it was a bit of work trying to figure out what character that I could cover that nobody else was covering. I went inward and started thinking about personal things and thought about the very male fear of having a child with somebody, the fear that goes with that and tried to create a subconscious, male perspective of that.

I loved Sick Girl, your entry in the Masters of Horror series, so you’ve done the condensed story thing for film, but talk about doing this where you were only allowed a certain amount of minutes.

It’s great because you can really focus down on a simple idea. When you’re making a feature, you’ve got all these layers and all these themes you’re trying to do, all these things you’re trying to put the characters through. In the short form, it’s more like writing a poem as opposed to writing a novel. There’s something more poetic about it. You can get more to the heart of an interesting idea in a really brief way.

Are you a fan of these cinematic anthologies? It kind of made a little bit of a comeback with Trick ‘r Treat a few years ago, but they were dormant for a long time.

Absolutely, ever since I was a little kid. Not just in horror, but in terms of horror things like Cat’s Eye and Creepshow and those kinds of anthology films. It’s a type of forum where filmmakers can kind of experiment and try some new things, you know, get a little wild with their ideas. There was a two-part anthology movie called Two Evil Eyes that George Romero and Dario Argento did. There’s also a movie called Woman Times Seven where Shirley MacLaine played seven different women. It’s just a fun format; I love it. I haven’t seen all of the latest ones, but the ones I have seen there’s always some good stuff within those.

How were you approached to work on Tales of Halloween? What were your parameters?

Axelle Carolyn, who started the whole thing, just called me up and I was the last person brought on. The other directors already figured out what they wanted to do, and I was told that I could make whatever I want, so long as it’s set on Halloween and as long as it takes place in the same neighborhood. If there was any way to create a connective tissue with the other segments … I said “Yeah, that’s great.” I came up with something. I could do pretty much whatever I wanted and explore any subject I wanted to. They just let me do my thing. As it grew, I got a little more involved in post-production. We kind of traded notes and ideas about each other’s cuts. There was a big discussion about what order the segments should go in. It was a fun, familial experience in general.

Are you happy with the way Tales of Halloween turned out? Would you be willing to do another one like that?

Absolutely. We can only take it to new heights the next round. I’m really happy with it. It has some really cool directors and some really cool perspectives. Some of the guys who worked on the film I wasn’t familiar with their work, but I sure am now. There’re some awesome people involved in it.

If someone is new to your work, where would you steer them to first? I started with May, but what would you recommend a newbie watch to get started with you?

Oh, gosh. I don’t know, that’s a tough call. I guess May because it was my first really personal film. That would be the first thing I directed people to. It’s not something I’ve ever really though about. It’s cool that people can kind of discover the films jumping in anywhere along the lines of the 13 years I’ve been doing this. I guess May.

I feel like your work is getting stronger and stronger. I like all of it. It’s all sustained. It’s all really good. There’s no slack. I just see you getting better and better. I wish you did more stuff.

Me too! I’m always doing the best I can to put stuff together, but it’s tough sometimes. My stuff is pretty different and pretty wild. I’m trying to get better in trying to express an idea and why I love it so much. I’m trying to get better in relating those ideas to people in the business. I started pretty young. May was made when I was like 25 years old, so the years have helped. A lot of the people in the business are kind of … the people that are running development studios and independent places are finally lining up on the same things I grew up on, so it’s starting to get a little easier, but I don’t want to jinx it. I’ve got a lot of really cool stuff coming up.

I thought you were great as an actor in Roman. Any chance we’re going to get to see you in front of the camera again?

Gosh, I don’t know. I hadn’t thought about it. That was just a unique situation where we did May, and Roman was another script I had lying around. It was a companion piece to May. They were very similar in terms that they dealt with lonely characters. After I made May I didn’t have a burning desire to do Roman, but I showed it to Angela Bettis, and I said, “Hey, why don’t we switch? This time, you direct it and I’ll be the actor.” It was a special thing. I act for friends when they ask me, but that kind of goes back to our school days when we were all in each other’s short films. It’s kind of one those things where I have to be asked. It’s like getting invited to the prom. It’s not something that I’m actively pursuing.

Any chance we’re going to get a movie of your novel I’m Not Sam?

Gosh, I hope so, man. I’ve got a script ready. I might not direct it. I might just be the writer on it and find a cool director for it. We talked to some people that haven’t worked out yet. I’m Not Sam is definitely on my plate.

Yeah, I try to dabble in each of those genres within the horror genre. Sick Girl, especially, has a lot of romantic comedy elements. I’m very enamored with romantic comedies throughout time, especially from the 30’s. I’ve got stuff sitting in the drawer that isn’t horror, but obviously I’ve made a little name for myself in making horror stuff, so that’s obviously where I get a lot of interest. I’ve got a lot of stories I’d like to tell. We’ll just see where that goes. But I’m perfectly comfortable in horror. It’s given me a life and a career.