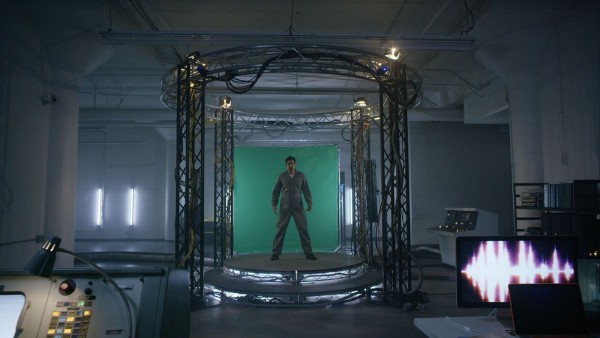 Writer / director Michael Hurst has been creating a niche for himself in the “B” movie market, making films aimed at fans of action, science fiction, and horror. In addition to writing Fire: Nature Unleashed (starring action star Bryan Genesse), Ninja (starring Scott Adkins), and last year’s Re-Kill (also with Adkins), Hurst has directed a number of films, including this year’s time travel action / horror hybrid Paradox, starring Zoë Bell. In this interview, Hurst discusses his latest film and working with Bell.

So I read some trivia that you’re a kickboxing champion. Is that true?

I was, yeah. I’m able to write stuff like Ninja with some degree of faithfulness. You have to exaggerate it with Ninja, but yeah, I used to be the British kickboxing champion.

That’s awesome, man. Ever thought about being an action star?

You know, I got beaten up in the face too much. That’s what happens when you’re a real kickboxer. I don’t look like Scott Adkins.

You’ve written or directed a number of action-oriented films for quite some time, even going back as far as the Bryan Genesse movie Fire: Nature Unleashed. What is it about this genre that really appeals to you?

Honestly, I only write and direct films that I would watch. There’s no point in dedicating your life to writing stuff I don’t want to watch. The trick of being a filmmaker is you have to look at the stuff you do – and you’re doing it from 10PM until 2AM in the morning every day – and you have to want to watch that, or want to buy the DVD of it, or you want to go see it in the theater when it comes out. I only make that stuff. I like that stuff. I was a big fan of Stallone and Van Damme growing up, and I’ve always enjoyed that stuff and if those come out, I always go see those. That’s why I write that stuff now.

Well, your new movie Paradox appealed to me because you’ve got Zoë Bell in there. She’s an underrated actress and action star. She’s a great performer. Talk about landing her for this role.

Sure thing. Paradox is my tribute to James Cameron. It’s not an accident that the character names in it are referencing James Cameron’s films. The Terminator was so important to me growing up. It’s a nod to James Cameron. With Zoë Bell, she’s a strong female lead, which is very James Cameron-esque. It’s much more interesting in some ways to have a tough female lead than a tough male lead. If you can turn your lead into a tough female lead, it makes it much more interesting. It’s a bit more different, which is what you’re always trying to do. Once you write a tough female – a really tough female that can really do it all – it’s a quite limited list in terms of casting. Zoë Bell is at the top of that list, in my mind. The distributor, XLrator, of Paradox rated her very high, and so they said, “Can you get Zoë Bell?” That would be a great idea – let’s try to get Zoë Bell. I made an offer to her, via her agent, and then I went to Malibu the next week with her. You always have to meet them face to face to try to convince them to do your piece. It’s always a bit nerve wracking to meet someone like that. By that time, they’ve read the script, and they kind of want to like you. My pitch to her was I wanted to do a movie where she started off the movie not being “Zoë Bell.” She starts off being very young, very innocent, sort of defenseless. Then, she grows into “Zoë Bell” with the twists and turns, so that by the end she’s full-on, pure badass Zoë Bell. The idea of that was a challenge, and she’s amazing. My best moments on the set were just watching her act. She’s a really good actor. She’s amazing when she’s kicking and brawling, but when she sits down to act, she’s fantastic.

Paradox has some interesting time travel aspects to it. Time travel is a difficult genre to crack. Talk about the challenges of working out the kinks of the complicated scenario.

The thing about time travel is that you can reverse cause and effect. With time travel, the fun of it is that you can write the effect first and go back and see what the cause was. Everything is out of order and then it can be quite simple, but it can seem quite complex. In Paradox, one of the key things is you see a dead body. It has been horribly murdered, so I wonder how that happened. I’m going to show you how it happened, but I save it for later. I don’t have to write that scene first; I’m going to write the aftermath first and make sure it lines up. The aftermath you’ve already seen. That’s fun. It’s very fixed.

You shot the movie in one location at that facility. Talk about the challenges of shooting the whole thing at that location.

Yeah, we shot it all in one location. With a low budget film and a tight shooting schedule, what you want to avoid most is when you move the location, like moving across L.A. It costs you a lot of time and a lot of money and a lot of effort. When you’re doing a movie like this, you want to make sure you’re strict in terms of space. We shot the whole thing within 500 yards of the location. We never left. You’re constantly redressing. From scene to scene, we’re only moving about 15 feet. It was really easy. We could spend the budget on art direction and production design. We can be very efficient with that money.

You had a movie come out late last year as part of the 8 Films to Die For series. I actually got to see it in a theater. That film was Re-Kill. I’d waited a really long time to see that. You wrote it. Anything you’d like to say about that one?

Honestly, life’s too short. It was one of the best scripts I ever wrote, but it was the worst experience of my life. It was the worst thing that ever happened to me. I almost gave up filmmaking. It was that bad. After Dark is a graveyard for ambition. A graveyard for creativity. I hated every split second of it.

I hope that James Cameron’s fans can watch it with smiles on their faces. It’s not art; it’s just a movie. It’s for people who like Primer and Timecrimes and The Terminator. That’s the crowd I’m after.

Paradox will be released in theaters on April 15th and on VOD and iTunes on April 19th, courtesy XLrator Media.