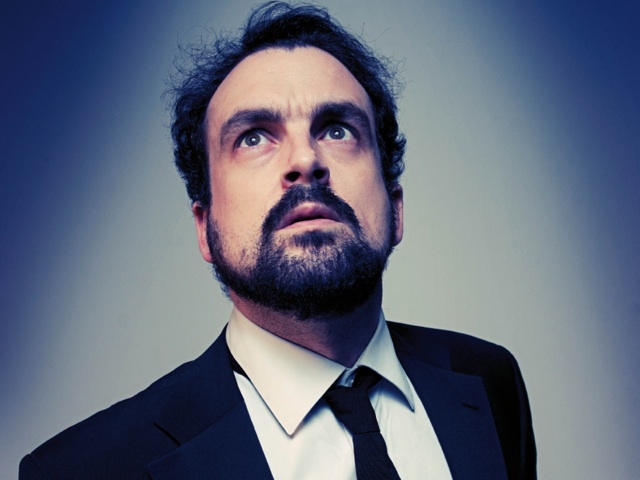 Prolific writer / director / actor Nacho Vigalondo has been alternating between writing and directing his own films – radically unique features such as Timecrimes (2007), the segment “A is For Apocalypse” in the anthology ABC’s of Death (2012), and the post-apocalyptic film Extraterrestrial (2011) – and acting in other filmmakers’ movies.

His role in the jungle chase film Camino (2015), co-starring Zoë Bell as a photojournalist on the run for her life in the jungles of Columbia, is the villain, a cutthroat drug runner named Guillermo. Vigalondo took a few minutes to be interviewed on his role in Camino while he was in the middle of filming his next feature film Colossal, starring Anne Hathaway, due later in 2016.

Camino opened in theaters on March 4th, and will be on demand on March 8th from XLrator Media.

Your role in Josh C. Waller’s film Camino is interesting. Talk a little bit about working with your director Mr. Waller and your co-star Zoë Bell.

I started working as an actor before moving to filmmaking for good, but since I´m better known as writer/director I’m not used to getting offered big, deep roles like this one. It was a surprising and blessing turn of events. To be honest, since I love to act, I would have said yes to something in worse circumstances, but the fact that I was going to be directed by Mr. Waller, a genuine genre director in the good old American style, and next to Zoë, one of my favorite presences on screen (and off screen) was cosmic jackpot for me.

You alternate between writing and directing your own films and acting in movies you don’t write and direct. Say something about your interest in acting. What drew you to act in Camino specifically?

The thing is, I like to see my name put next to the movie title, but what I most love is the process, the whole mechanism, the interaction with so many people with different skills and different points of view, all converging in the film. I´m actually addicted to [movie] shootings, even if I´m not directing! Being an actor is a creative duty that I love, from getting deep into character to following the marks on the floor. And sometimes following orders from others is as pleasant as giving the orders yourself. I´m missing the Camino shooting as much as I miss the last one I directed.

Nacho, you’ve made some interesting films as a director. Your segment in ABC’s of Death – “A is for Apocalypse” – and your film Extraterrestrial both have apocalyptic themes. Talk a little bit about your interest in the apocalyptic genre.

I never think about “my themes” this explicitly, but I get your point. In ABC’s of Death I wanted to mix an intimate drama and a cosmic event (the classic Philip K. Dick movie) and Extraterrestrial tried to set a romantic comedy in a context where all social rules are gone and everybody has full permission to act like a villain. The apocalypse is a nice tool to quickly reach pretty interesting places where the human nature is tested in a different way.

I actually saw your movies Timecrimes and Extraterrestrial when they were released here in the U.S. in theaters. Your films are very cinematic and multi-layered. Would you mind telling me a little bit about some of your inspirations for those two films – particularly Extraterrestrial, which was a unique take on the end of the world genre?

Thank you! Timecrimes was heavily influenced by old school “B”-movie crime films and literary sci-fi, all those twisted pulp short tales I was reading at that time. Extraterrestrial comes from my strange relationship with romantic comedies, a genre I possibly love and hate with equal energy!

You’ve just made a movie called Colossal with Anne Hathaway. Would you care to say anything about that project?

All I can say so far (we are still finishing some shots) is the movie is at the same time small and massive. The casting is unbelievably exciting, the production level is my biggest so far, but if you are familiar with my stuff, you´ll see it in every frame. I hope you like it!

Lastly, Nacho, you made a good villain in Camino. Would you be up to playing more villains in the future?

I´m in conversations with the excellent Argentinean director Tamae Garateguy to play another one! I´d love to play one hundred Latino villains before I die!