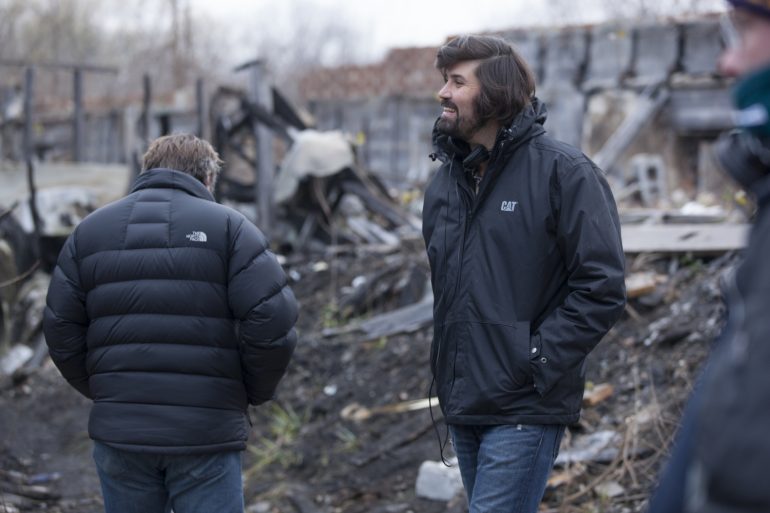 Set after an unspecified apocalypse in and around The Rust (urban wasteland), the story concerns a Virgin (played by Lily Cole) who is warded over by a sinister, immortal Magus (played by Goran Kostic), a mystic intent on fulfilling a prophecy concerning a savior named Orion.

Enter The Hunter (played by David Arquette), who wanders into their midst, upsetting the balance of the stars …

I’ve got to tell you, man, I’ve literally seen about a thousand post-apocalyptic movies, but I’ve never seen one like Orion. It’s a very different film.

(Laughing.) I’ll take that as a compliment!

You should. It’s really radical. We’re talking the uncharted wastelands of Zardoz and Quest For Fire.

You could have set this movie in ancient times, but you set it in the ancient future. I want to know why you went that way. Why go so far into the future that it’s like starting all over again?

Basically, this originally came to me as a post-apocalyptic thing. I referenced the Dark Ages in Rome, and how people in the Dark Ages – after Roman civilization, the generations that followed – populations just collapsed. People were living amongst the ancient ruins of Rome. They had no idea about real civilization at all. A new mythology started to take hold, Christianity and everything. That whole idea was in my mind. That’s what got me thinking about the movie.

You’ve only got a handful of characters on screen – and it’s really all you need to tell your story. You’ve got the Magus, the Hunter, the Virgin, and the Fool. Talk a little bit about how you break the movie up into Tarot-type chapters, and how the characters are representations of the Tarot.

The idea came out of ideas of the Tarot. They’re not Tarot cards, but they’re based on the Tarot. Some ideas come to me in images. The idea of the film was that … there was an image in my mind of a hunter/gatherer character playing cards with this death-like shaman figure. But the cards they were playing with were Tarot cards. They were gambling with them. That was the first image I had for the movie. I started going, “What’s this, what’s this?” In terms of what the cards became, I thought it would be interesting if the cards they were playing with were they themselves. It’s a hundred years or so after the apocalypse, so these weren’t really Tarot cards, but similar to Tarot cards. I started to come up with my own Tarot archetypes.

The film looks like it was grueling to shoot. How do you pitch something like that to David Arquette and your other actors, who are not amateurs. How did you deal with them in the ruins of Detroit?

They were down. They were totally down and totally amazing. I put them through hell. They were great. They were a dream to work with. I can’t believe all the stuff they did for me. In terms of how do you do it … that’s one of the arts of directing, is getting people to do what they don’t want to do. That part of the art of directing is getting people to do things. And that goes for everybody. When we were shooting, I would go, I want to do this, and this, and this, and production would go, “Oh, you can’t do that – it’s impossible.” I would say, “No, we’re doing it. We are doing it. You just have to find a way to do it.” Especially working on a small budget, you just have to find ways to do things. You have to find ways of making people do things they don’t want to do. Even through post-production … we had to find ways to do all these special effects. We didn’t have very much money at all, the stars and the things in the sky – we literally had no money. It couldn’t look fake, so I had to force these people to make special effects. Eventually they wanted to get off the project, but I can’t let them get off. Keep going and going until we get the special effects right. That’s just part of directing.

Talk a little bit about working in the ruins of Detroit. It looks incredible.

It’s beautiful. It’s amazing. To be honest, we’d be shooting, and we’d hear gunshots in the distance. That did happen on several occasions. We had to have security. We didn’t want somebody to come steal our stuff. In these neighborhoods with all these buildings, these are definitely poorer neighborhoods. I don’t know. This is just me, but I think people overstate danger. It’s poor, the buildings are collapsing, and maybe murders have happened there, but you’re not in downtown Iraq in a war zone. The chances of something happening to you are really slim. I don’t believe in living in fear of crime. If you live there your whole life, something might happen, but we were only there a short time. I would even walk around by myself at night, but I never had fear for myself. Some crazy stuff happened while we were location scouting, though. We were in this building – the Packard plant – which is this huge building that was collapsing. I was there with the location scout and the producer. We were going around the building and all of a sudden we look outside and this truck pulls up. It was almost a post-apocalyptic looking truck with these guys who have dogs and guns. They were hardcore looking guys. They didn’t look like normal guys. They didn’t look like crack heads – they looked dangerous. The location scout, who was a local, said, “This is trouble.” We were like, “What?” He said, “We’ve gotta hide – these are scrappers.” People in Detroit get out of jail and need to make some money, and they go into the buildings and tear the copper out of the walls. That’s part of the reason why Detroit is falling apart. These guys looked hardcore. We hid around the Packard plant while these guys went around with guns and dogs. It was freaky. We ended up slipping out of the back entrance and got out of there.

Talk a little bit about the character of The Magus. I took it that he’s been around for generations through sorcery, and without him the prophecy would not have come to pass. In a way, he allows himself to become passed on to The Hunter. He’s an interesting character.

When I’m writing or directing, I never think of characters as good or bad or whatever. Even though the guy is doing some heinous shit, I don’t really see characters I create that way. I think eventually, as it comes out, you see there’s a reason for everything he’s doing. At least I do. It’s driven by something larger. He’s definitely one of the more intriguing characters of the script. I see him as a shadow figure. He’s very ephemeral. He’s unknown. He works by his own logic.

Talk a little bit about the history of the film. I remember hearing about this project at least three years ago. What’s taken so long to get it completed?

We had no money. At one point, we had to raise more money. And I’m crazy. I don’t know. I don’t want to call myself a perfectionist, but I can’t let things not be right. I just kept working on it. Same thing with the special effects. They took forever. I wanted them to look right. Hopefully you don’t even know they’re there. That alone took a year. All of this stuff takes time. There’s an old saying, “Do you want it fast, cheap, or good?” You can have two of the three, you know? When you don’t have any money, you’re doing a lot of the things yourself. This film is not your normal, low budget indie film. There’s sets, costumes, effects, multiple locations, there’s action scenes, there’s stunts, there’s all this stuff. I’ve never seen an indie film that’s ever tried all of these things. It just takes a lot of time. I had to do a lot of stuff myself. You can’t throw money at anything.

Is there anything specific you’d like to mention about making a film set in a post-apocalyptic time?

I don’t have any one specific genre that I like more than any other genre. I’m a big movie nerd, so I watch all kinds of movies in all kinds of genres, and with the post-apocalyptic genre, it was just interesting to me. There are plenty of films in this genre that I like – obviously The Road Warrior. Also The Road. There’re also zombie post-apocalyptic movies like Night of the Living Dead that are great. I don’t really think in terms of “Oh, I want to be like this movie.” I just had this idea. It could have been set in the past like a Quest for Fire type thing. Or I could put it in the future, which intrigued me.

If the world were to end as it does in Orion, and you happen to be a survivor in that world, do you think you’d make it as a survivor? Would you survive?

Man. I don’t know. I’m pretty resilient. Somebody’s laughing at me because they know me. They’re saying I couldn’t. I think I could. That’s a tough question. I hope so. I’m going to say yes.

Are you The Magus or The Hunter?

All the characters I see as parts of myself. I see this film as a map of my psyche. But I do strangely relate more to the antagonist than the protagonist. (Laughing.) I definitely relate to him.

Who is this movie for, man? It’s a difficult movie to watch.