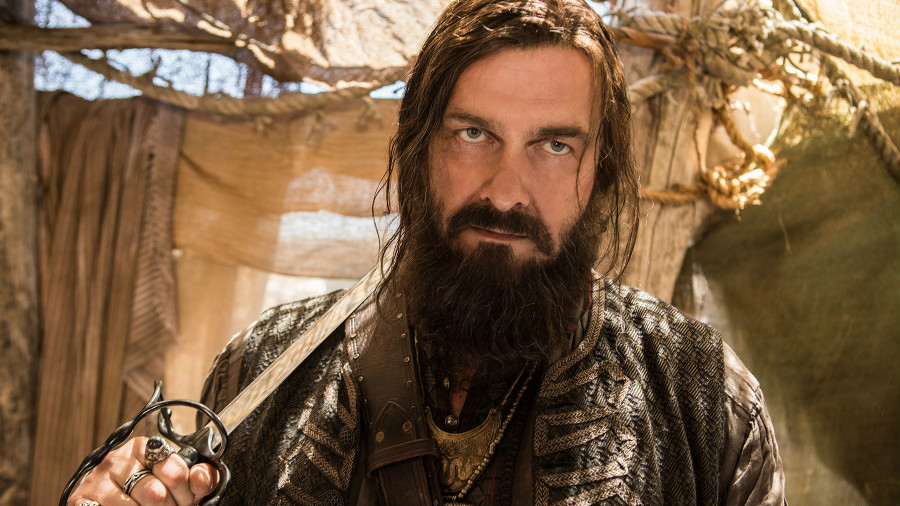 Over the last decade, Irish-born Ray Stevenson – all 6’4″ of him – has been one of the busiest and hardest working actors working in film and television.

After his supporting role as Dagonet in the Jerry Bruckheimer-produced epic King Arthur (2004), Stevenson appeared in a supporting capacity in HBO’s Rome (2005-2007), and then starred in the title role as Frank Castle in Punisher: War Zone (2008). He followed that up with interesting character roles in The Book of Eli (2010), as real-life character Danny Greene in the underrated film Kill the Irishman (2011), as Volstagg in both Thor (2011) and Thor: The Dark World (2013), as well as co-starring as Porthos in Paul W.S. Anderson’s The Three Musketeers (2011).

In the last year, he played opposite Samuel L. Jackson in Big Game (2014), and he takes on his most ambitious role yet as Blackbeard, the pirate, in the third season of Black Sails from Starz. In this interview, he discusses his successful career in overview.

I’ve got to start this interview off by telling you that you made a great Frank Castle and that I’ve been disappointed for years that you weren’t given the chance to reprise your role as The Punisher.

So was I! Write in and tell them that! I would in a heartbeat go back! I loved the storyline and the comic books that it was based on. It could definitely do with a sequel.

You’ve had a great decade of starring or co-starring in some really fantastic projects. I think King Arthur was the first time I ever saw you in anything, but you’ve been in one interesting film after another ever since.

King Arthur was my first sort of Hollywood movie. We shot it in Ireland. I went from that to Rome. Before those, I was doing theater and television and small films in the UK.

You’ve been a Musketeer, and you’ve been in two Thor films, and every time I see you, you shine. You’re thriving in this sword and sorcery / swashbuckler type genre. You’re slinging swords and shooting muskets in every other project these days. How fun that must be. Talk about that a little bit.

Yeah, I know. I don’t know. I guess I’m an old warrior at heart. I love humanizing these characters and fleshing them out. I don’t play them as historical characters. I play them as contemporaries in their own times. I delight in bringing that into existence.

You played a beloved character- Porthos – in The Three Musketeers. You were surrounded by stunning sets and locations while you made that film.

We shot that on location in Germany. There were some incredible locations in Bavaria. I played Porthos … again, he was larger than life and he has a certain attitude towards life. We filmed that movie with the Avatar cameras, in 3D. The sword fighting on that one … the discipline involved was incredible because they can see around you. You can’t just technically lay off on the swords; everything has to be on target. With all the time we spent rehearsing the fights … if we hadn’t rehearsed, you’d see misses. That was a particular challenge. I got to work with some great swordspeople who trained us on that.

You’ve done two Thor movies so far. What’s it like working in the Marvel universe?

It was very hot! (Laughing.) They were amazing. Kenneth Branagh is such an amazing director. Doing the first one was such a dream come true. They couldn’t have picked a better director to set it up. Vikings in space. With the scale and the Shakespearian aspect of that whole world … It’s just great to be a part of that Marvel universe. It’s such a signature body of work now for our generation. It’s influencing so many other movies now, and I’m just delighted to be a part of it.

One of the best things you’ve done was a little movie called Kill the Irishman. I think that’s the best role you’ve ever had.

Danny Greene! They don’t come around often, but that was an incredible movie to work on. I got to work with Christopher Walken. How good does that get?

I’ve got to mention your supporting role in The Book of Eli. Really cool movie.

Yeah, that was a lot of fun. Working with Denzel Washington and Gary Oldman … on page, my character was a sort of two-dimensional sort of character, but I saw it as something a little more. He was trapped between the old world and the new one. He’s not part of the old world anymore, and he’s not part of the new one either, but he’s kind of a lost soul. He has a Road to Damascus moment. To play that, there’s no way he would miss killing Eli when he walked away, but somehow he misses. Not once, but twice. It’s that sort of moment that a hundred years later would become deemed a miracle. That’s the start of legends and miracles. He took his aim from 20 feet away and he misses. Two times. Even though he doesn’t know what’s going on, he knows that something is going on. There’s a change happening to the world and it’s bigger than him. Working with the Hughes Brothers was wonderful because they allowed that space for me to go there.

Just a couple months back, it seems, I saw you in a movie called Big Game in a theater. That was a special little film. You co-starred with Samuel L. Jackson.

It was a laugh! Yeah. It was a Finnish director. We filmed that in Germany. And Sam Jackson, he’s one of the best character actors we’ve got out there. I got a chance to tell him to his face how great I though he was in Django Unchained. I was blown away by how good he was in that. His work is breathtaking, and to work with him was such a thrill.

When you’re offered something like the role of Blackbeard on Black Sails, do you jump at it, or do you spend time thinking about it before committing to it?

I think about it because it’s a huge responsibility. I want to make sure that everything is in place to enable the realization of a character like that. I wouldn’t want to jump at Blackbeard without considering it first. When I saw the “Making of” Black Sails, it just blew me away. They put their money on screen. They’re not afraid to spend it. Their production values are through the roof. I knew that the world around which it existed was going to be there – it was all going to be there. The costumes were going to be there, the armor … there’s no better realization to creating a character like this. It’s not just going to be an hour and a half or two hours like it would be in a movie. You’re getting an hour per episode. There’s time to develop this character all the way through, along with the other characters in play.

I would imagine that you’re a big guy. You seem like a very physical dude. Talk about the physicality that you put into these projects. You’re in your early fifties, but you’re going strong with these action-oriented roles.

Well, yeah. For some reason, I’ve got this strange thought in my head: Aerodynamically, a bumblebee shouldn’t be able to fly, but nobody told him he couldn’t. Being 51 and doing action movies … nobody told me I can’t yet. So I just go ahead and do them.

What are you looking forward to in the next couple years of your career, Ray?

I don’t know. I love the comedian aspect to this work, and I’m up to the challenges that come with that. I’ve been blessed to be able to play a range of different characters. I’m just delighted to see what’s coming up next. I just think to myself how lucky I’ve been. I also delight in doing movies that are not in my demographic. I like doing movies that are not just the sorts of movies that I want to see. I don’t only want to movies that are for my peer group. No, that’s not my job as an actor. I delight in trying to flesh these people out and make them into a reality.