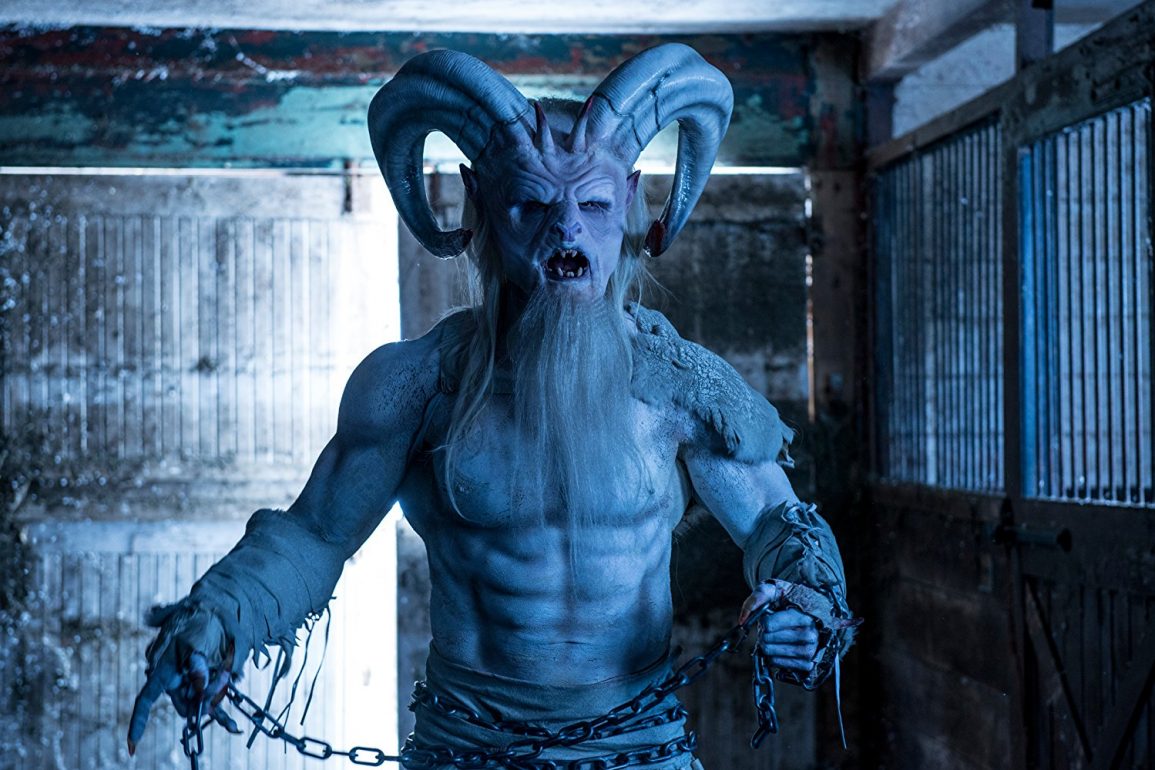 Muscleman, stunt man, and actor Rob Archer has worked in the film industry for over a decade, appearing in projects such as Bulletproof Monk, RED, the remake of RoboCop, Kick-Ass 2, and as the BioMan in the television series Defiance, but his role as the demon Krampus in the new film A Christmas Horror Story (out in theaters on October 2nd) takes his career to a whole new level. As the frightening looking Krampus, Archer gives the role his signature physicality, utilizing every ounce of his skills as a performer to bring the horrible creature to life. Archer took a few moments to discuss his career and taking on the role of the dreaded demon of Christmas.

I’ve been watching Defiance since it started, so I know you as “BioMan.”

Tell me a little bit how you got started in the field of playing all of these interesting creatures and monsters.

I grew up as an 80’s kid. I grew up loving Friday the 13th. As we know from the 80’s era, you’re either a fan of Freddy, Michael Myers, Jason, or Leatherface. You can like all of them, but you can only love one of them. I always loved Jason. I have him tattooed on my back. Being the size that I am and being the unique shape that I am and going through the industry and finding my place in it, I just fell into that – playing the monster type stuff. I landed the role of Bio Man on Defiance and it worked out really well. During that time, I caught some eyes over at Copperheart Entertainment, and they were paying attention to what I was doing. I was at 285, 290, but I dieted down for this. I’m 6’6″. Most companies would have their actors padded up in a suit and use CGI to enhance him, but when they came to me with the idea of the Krampus character, what kid from the 80’s wouldn’t want to play an iconic horror figure like this? I would have died to play it. It’s very different from Defiance and anything else I’ve ever done. Krampus is an icon. It was an honor just to be asked to do it, let alone getting to play it.

It’s interesting to hear you say you would have died to play it because George Buza, who plays Santa in the movie, told me you almost did die playing it. He said you almost froze to death while filming some of your scenes.

Yeah, it was cold. I’d gotten down to between 4 or 5% body fat. I’d booked some photo shoots right beforehand and came back from Florida and we were shooting in minus 20 weather. It was very very cold. The production had these big blankets made up and there must have been about 25 different hot pockets in the blankets, so if I had to run in the movie … there are scenes where Krampus is running through the woods, there would be one person at my start point and one person at my finish point to throw that big, heated blanket over me every single time. That’s what we were doing in the cold. They took care of me.

Your Krampus character is literally on the poster, so the movie is being sold on his image. Talk about actually seeing yourself completely made-up and costumed. You’re a terror to behold.

You know what? It’s indescribable. They told me they were going to do it all white and we were going to do this and do that, and in the first fitting they wanted to show off my body off even more. We went through a few different outfits, less this, less that. They wanted to show me off. They didn’t want to cover me up and they wanted to show everything. As they were putting the outfit together, by the third fitting you could visualize it coming together. It was so unique and different. I trained so hard for this and I was really happy that they wanted to show my body off as much as possible. The very first day when I got the actual make-up on, it took about nine hours with three special effects make-up artists putting me together. When I walked over to my trailer, I could really take in what they had created with me; it was unreal. It was just absolutely unreal. I was living my dream. It’s an absolute dream to be able to do what I’m doing. Being a part of a film that is going to do amazing things is incredible.

I’ve always wondered about this: Since it takes so long for you to get into make-up, when do you have time to work out? Don’t you have to be in tip-top condition every day?

Every day, yeah. I think we only shot two days back-to-back. My shortest day on set was 18 hours, and my longest day was 22 and a half hours. Obviously I couldn’t train after work, but I would be up the next morning to train. My diet – whenever I needed to eat, I ate. My food intake and all that was kept proper. I’m not going to waste away when I’m at that point. As long as I kept my food in me and went to the gym on the next day, then I’m all good. With the training and the diet, the diet spoke 90% of it. My metabolism is really fast at that point anyway. The main concern was keeping my abs out. I trained all the way through.

Well, Krampus doesn’t dominate the movie. There’s a healthy build-up to when he actually does show up towards the end of the film.

Isn’t that great? There’s that suspense. Everybody’s waiting to see when he appears.

And it’s worth it.

It’s so worth it. It’s got that shock factor to it. Although I’ve seen the movie three times already, every time I go to watch it I’m super stoked to see something a little different or something I didn’t pick up before. I love watching the audience take it in. It’s amazing to be a part of a project like this. It keeps you on the edge of your seat.

Have you been approached to be in the sequel?

I’m already training for it, my friend. Of course there’s going to be a sequel. There’s no doubt in my mind.