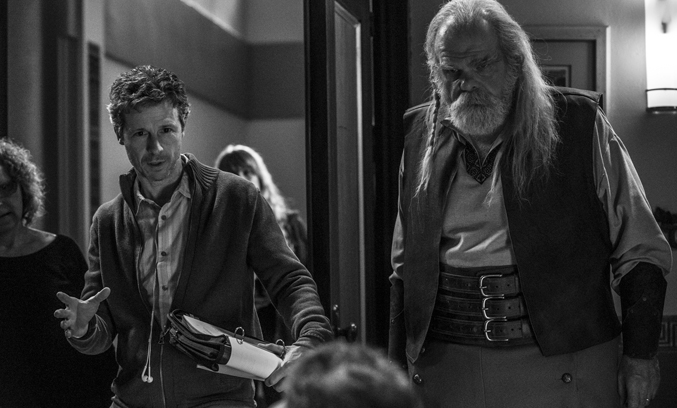 The anthology horror holiday film A Christmas Horror Story (out in theaters October 2nd) pits a badass Santa Claus against a legion of demonic elves and the demon Krampus on Christmas Eve, but it also interweaves several other stories in its narrative.

Producer Steven Hoban (who has produced films such as Ginger Snaps, the remake of Black Christmas, Splice, and last year’s Wolves) directed one of the segments of the film, and he took a moment to talk about his inspirations for the picture as well as his involvement in it.

You’ve produced some really interesting horror films over the last few decades. You produced Ginger Snaps, one of the best werewolf movies of all time.

You’ve made a career out of producing horror films. You’ve got a vested interest in the genre.

It is a passion, for sure.

How do you choose which projects to produce?

It’s kind of the same way in how an audience chooses which movies to go see. I go with what I like. What’s where it starts. The movies I tend to do are genre films. They’re smarter, more intelligent genre films. From a pure producing point of view, part of the issue is “what can you make?” I’m not in the Hollywood system. I produced Splice, which was a Warner Brothers movie, but most of the films I do are independently financed films.

Last year I saw a movie you produced called Wolves with Jason Momoa. I saw it theatrically, but it was barely released. You’ve got to say something about Wolves.

Wolves was a very different kind of experience. I really did that movie because I was friends with the director, David Hayter. I’m a fan of his work. He’s somebody we really wanted to work with. That’s how I got involved with that. He developed that on his own. Most of the things I do are developed in house. I just helped David put that together and helped him realize it.

You’ve got another project coming out with Jason Momoa called Debug. It looks a little more sci-fi than horror.

Heads up – I love Jason Momoa. He was a great Conan.

He was born to be Conan!

Your new film A Christmas Horror Story is something you actually had a hand in directing. You’ve been down this road with seasonal horror films before. You produced the remake of Black Christmas, which I loved. I like that version even better than the original.

It’s such a warm and beautiful movie.

It was. Glen Morgan, the director, did a terrific job with it.

So now you’re back with A Christmas Horror Story. When I look at the poster I see the entire concept of the film, the tagline, everything: Santa Claus vs Krampus! You build the movie around that centerpiece.

It’s funny. The way the movie came together, it was just a title. I hired a designer to design a Christmas card. What it was – and it was nothing like the poster we have now – it was inkblots of blood shaped like a Christmas tree with the title, “A Christmas Horror Story: To hell with the holidays!” That was it. That was how we started. It was going to be a collection of stories that would weave in an out, and each of the stories would be a different subgenre of horror. That’s how it started.

That concept is done fairly often with Halloween and straight up horror stories, but I don’t think that’s ever been done with Christmas before. You’ve got a story about a Changeling, a family being hunted by Krampus, you’ve got Santa battling all these demonic elves, and you’ve got William Shatner as the DJ spinning Christmas tunes on the radio.

And of course we have the ghost in the basement story. We hit several different aspect of horror.

Who’s this movie for? You’ve got Christmas and you’ve got horror. It’s right there in the title.

Anybody who wants to have fun over the holidays. That’s the whole point. It’s scary. It’s fun. It’s both. Anybody who doesn’t want to see yet another happy family Christmas Santa movie.

I know the movie ends with a twist, but are we going to get a sequel?

It’s in the works. There is a great twist. I’ve had people tell me that it’s the best twist since The 6th Sense. But, yes, there is a sequel in the works already.

What else would you like to say about A Christmas Horror Story, Steven?