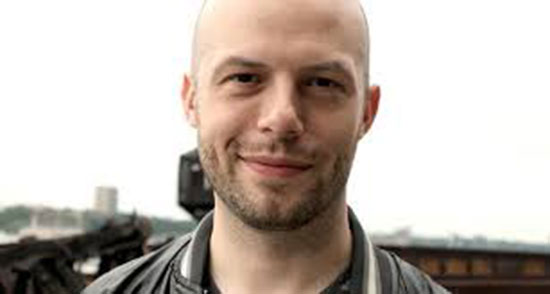 First time director Ted Geoghegan has made an auspicious and very impressive debut with the new horror film We Are Still Here, a mature haunted house story about a middle-aged couple (played by Barbara Crampton from Re-Animator and You’re Next and Andrew Sensenig) who move into a home that is host to a vengeful spirit they believe belongs to their recently deceased teenage son. The movie is one of the best – if not the very best – horror film of 2015, and it arrives on DVD and blu ray on Tuesday, October 6th, courtesy of Dark Sky Films. Writer / director Geoghegan took some time to discuss his inspirations for the project in this interview with The Action Elite.

We Are Still Here is one of the best horror films of the year. What are some of the inspirations you had or reference points for you while you were writing it and shooting it?

The film itself is heavily influenced by the 70’s Euro horror, Lucio Fulci types of films. His film The House by the Cemetery is a massive inspiration. In terms of story, but also in terms of the stylized way you look at the story. It’s also very heavily influenced by American horror films from the 80’s. Stuart Gordon, in particular. I grew up with Re-Animator and From Beyond. Those were very formative movies for me. Those completely coincidentally starred Barbara Crampton who is starring in my movie. It has touches of everything. Ultimately, at the end of the day, I wanted to make a love letter to all the horror movies I grew up loving. Without aping them. I wanted it to feel like something new and be original, but at the same time I wanted it to feel like a warm blanket. Like when you get a visit from an old friend that you haven’t seen in a long time. Things certainly have changed, but there’s something very cozy about coming home again. That’s what we were trying to do with this. It feels new and it feels like something you’ve never seen before, but it also kind of feels like those movies you grew up with. Hopefully, it reminds people of a different era of cinema in its style and the way things used to be done.

I get that totally. It must have been a very conscious decision to set the movie in a very well realized yesteryear. The sense of time and place in the movie is very specific.

Oh yeah, absolutely. I wanted to set it in a nondescript time. I refer to it as my childhood. People ask me when it’s set, and I tell them it’s set in my childhood. The main reason was to avoid some of the modern tropes like cell phones or scenes of characters Googling the history of the house, things like that. I wanted – much like the film itself – I wanted it to be indicative of a simpler time. That’s a time that was my childhood. It feels like a very safe place for me. When I think of the late 70’s, early 80’s, it makes me very happy. I was very young and very happy then. The world was new. I wanted to have that in this as well.

The movie left a very strong impression on me. I can’t wait to see what you do next.

It was my first time directing. I’ve been writing and producing for almost 15 years now. I’m eager to see what the future brings. I definitely want to stay in the horror genre. I’m definitely a horror kid. I was the lonely kid watching horror movies all night until the sun came up. It’s still very much my passion. I see myself working – if not exclusively in horror – then in genre films. I love sci-fi, I love animation, I love really stylized action.

You definitely surrounded yourself with the right people on We Are Still Here. You had Barbara Crampton and Larry Fessenden there to inspire you or give you pointers.

Oh, absolutely. It was amazing. Barbara and I have been friends for years. I was one of the publicists on You’re Next. We just became very close. We became buddies right from the get-go. When I was writing We Are Still Here, I wrote the role of Anne for Barbara. Not necessarily ever thinking that she would ever play that character, but when you’re writing you imagine someone playing that part, and so in my head Anne was always Barbara. It was unbelievable when the movie started coming together that we might actually get Barbara, that she might actually want to play this character. Similarly, I’m buddies with Larry as well. We both live in New York City and we have beers once in awhile, and when I was writing this, I told him that I’d written this role, this hippie, stoner dude named Jacob and that it was very much inspired by him. The way the character looks at the world, he’s just a good dude. Just a simple, laid back dude who has a job to do. I love Larry, and I could just imagine him as this character. His schedule permitted it – he just finished shooting an episode of The Strain, and he left that set and the next day he was on my set in make-up. It was very fortunate that two of my friends in the industry got to star in my first movie.

It’s nice to have a horror movie with mature adults in it. Most horror movies these days have a bunch of bouncy ball teenagers running around.

Yeah, absolutely. That comes from the fact that the films I grew up watching starred adults, or at least young adults. A big influence for me is the George C. Scott-starring film The Changeling. What an amazing movie. It’s essentially about a curmudgeonly man in his mid-50’s who moves into a haunted house. It’s the sort of film that just wouldn’t be made these days. Who wants to watch a movie about a middle aged man in a haunted house? The truth is: Everybody! Don’t let your cast dictate the age of your audience. Hopefully my film helps people realize that. I wanted a film that starred smart, rational adults making smart, rational, adult decisions. Even if those decisions were wrong, you don’t have the dumb, silly teenagers. We do have two kids show up midway through the movie, but they are very quickly dispatched. Part of the reason they don’t last so long is to nail home what we’re trying to say in the movie. The film is not about these kids. It’s about these adults. It’s about very adult themes. And it’s about making decisions that potentially change the way you view the world at middle age. That’s kind of an amazing concept. I’m 36 years old, and 20 years ago when I was 16 if I’d discovered ghosts were real I would have had an amazingly different reaction to that than I would now at my age. I’d like to think that 20 years from now when I’m 56 – the age of most of the characters in the film – that my thought process would be completely different than it is now. As the years and the decades go by, we get so used to what we believe is reality. Having these characters deal with the reality that everything they believe is wrong, or maybe that they’re not wrong but that they have to open their eyes to something new, I think that’s great and we don’t see enough of that.

Any final comments about the film and how you’d like it to be received?

Ultimately, it’s a film for all horror fans, but if you are a fan of 70’s horror, you’ll pick up on different things. You may catch certain nods to films or styles that someone else might not get, but we made the film for everyone. It’s a movie that hopefully everyone has a good time with, that anyone and everyone is able to take something from. It’s a very unconventional film. It embraces stylistic and thematic choices that haven’t been made in films in 30 or 40 years. We have some really wild cinematography. We embraced the concept of melodrama. The script itself is – at times – very surreal and very abstract. It’s a film that doesn’t give you all the answers. It forces you to become part of the story. I feel that a lot of films today are speeches. You sit down and the movie tells you what the characters are up against and it tells you how they defeated it. This is a movie that doesn’t tell you all that. It gives you hints, but hopefully by the end of the film you’re still left with a lot of questions. You’ll take out of this film what you bring into it. You may find the ending of the movie very redemptive and very happy, or you may find it very sad. If you’re enjoying the film and you’re along for the ride … that’s what I want from you. At the end of the day, I just want people to have a good time with it. Hopefully the film sparks conversations; that it makes people think about not just my movie, but this lost era of film where horror fans and film fans in general weren’t spoon fed everything.