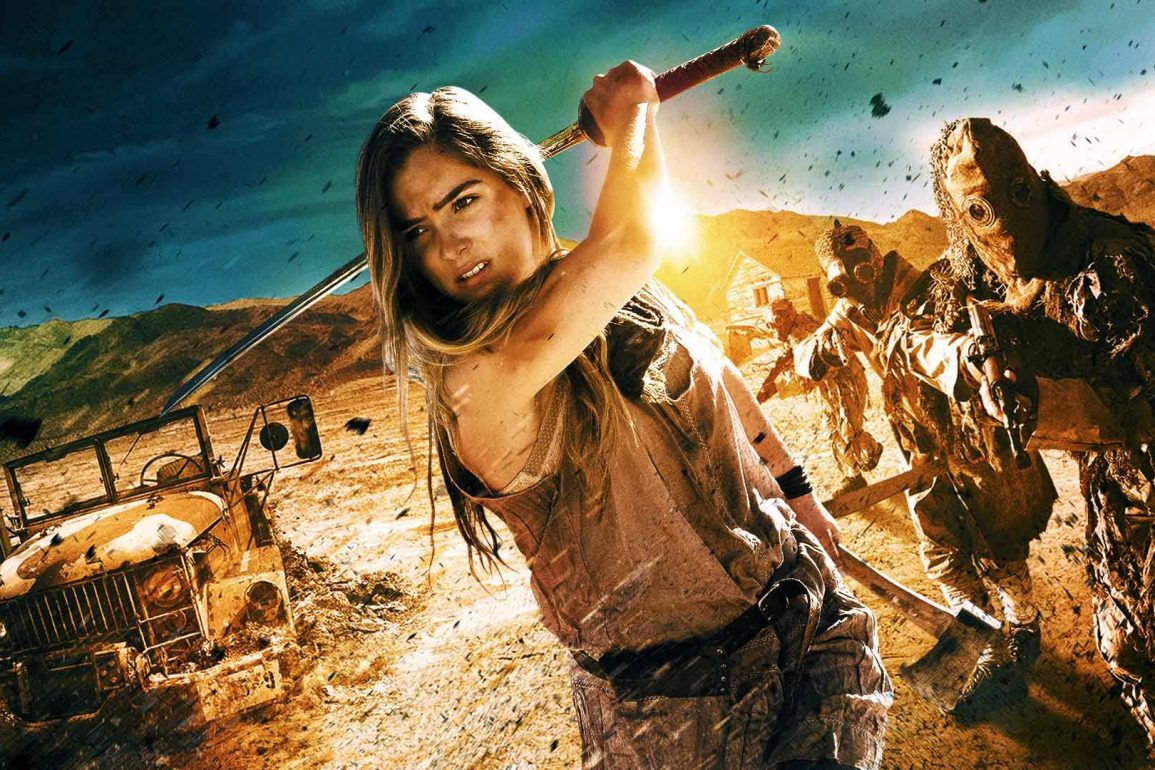 The feature film debut of both writer/director Thomas S. Hammock and young star Haley Lu Richardson, The Last Survivors is set in a post-apocalyptic, post-water world where humanity is fighting to survive amidst insurmountable odds. Richardson plays Kendal, a true survivor forced to fight and protect herself and her friends against a pack of bloodthirsty raiders, looking to overtake the last working water well in what has become of her homestead. Filled with heart-stopping action, suspense, and enough tropes of the genre to please even hardened fans of end-of-the-world cinema, The Last Survivors makes it U.S. premier on August 4th (on VOD, Digital Download, DVD, and Blu Ray), courtesy of Dark Sky Films.

Thomas, tell me a little bit how this project came together.

Thomas: The genesis was that I’d just done a movie called All the Boys Love Mandy Lane. We were driving through Texas through this crazy part of Eastern New Mexico where there was this huge drought going on. In all these towns the wells had gone dry, and the water was being trucked in. We thought that would be a great setting for the near future for a film.

Haley, how did you get the lead role for the film?

Haley: This was the first film I’d ever done. I just moved to L.A. from Arizona about a year before I got it, and I was really … it was my dream to do a role like this. My agents weren’t getting me auditions because no one knew who I was. I took matters into my own hands and submitted myself to one of those things online. It was a sketchy online website. I submitted myself and I went in. It’s the only thing I’ve ever submitted myself for online. I’m really glad I did.

Thomas: Sketchy websites are our thing. We went out to see if anyone was interested in auditioning. It was a fair way to go. You never know who’s going to walk in, and Haley stole our hearts.

Thomas: I feel like the cycle is back because it feels close. The drought in California, the drought in Australia, all of these things are happening. Just looking at pictures of smog. It doesn’t feel that far away.

Mad Max: Fury Road might be kick-starting the genre all over again. Is this what you’re hoping for? You’re riding the coattails of that a little bit.

Thomas: I don’t know if you caught this, but my favorite Easer Egg for The Last Survivors … if you remember the very first Mad Max, you meet the character putting a distributor cap into his car, and we took the same distributor cap, and that’s what Haley is searching for – the exact same model of the distributor cap. The last of the V8 Interceptors.

Thomas: That’s how much we love Mad Max.

It’s great to have a strong female lead in a post-apocalyptic film like this. By the end of the movie, Haley, you’re wielding a sword and a shotgun. It’s great to watch. Talk a little bit about doing that in this sort of a simulated environment.

Haley: I obviously appreciated being able to do this kind of movie and this kind of role. It was a dream. Looking back on it, I think I almost took it for granted how special and how rare it is for a young woman to get a role like that. Ever since then, when I get auditions and when I read scripts, I compare it to this movie and this character and it never … I’ve never found a character who’s as well-rounded and as strong a female character as Kendal is in this film. It’s great – even the characters in The Hunger Games and Divergent, those are such popular movies and the main characters in those films are young women. It’s amazing. Those movies make millions of dollars, and they feature young female characters kicking ass and saving the day.

Thomas: I love that this is out there now, and I’m glad we were able to write a character for Haley that was so very much the girl next door and relatable. She was someone you can be friends with. I don’t know if I could be friends with Milla Jovovich from Resident Evil, but in this case, Haley’s character is someone you would have known. That’s what draws people to the film. It gives it a reality.

Haley: In another life and in another situation she would be a normal kid. A cool kid, because she was able to last this long and fights to survive, but she’s a normal kid who could fall in love and could take care of people.

There’s a weird, subtle thing going on in post-apocalyptic movies, and I’m not sure if this was a conscious thing when you made this movie, but I’m seeing jars of peaches in more and more of these films, yours included. Any comment about that?

Haley: Did we start the trend?

I don’t think so. I even read an article about it.

Thomas: For us, it was a very particular choice. We just got asked about it, actually. There’s no green in the film. We wanted to have a moment where green would show up, but canned green goods are not particularly green. But peaches pop up visually. We decided to go with that, but also symbolically in Japan and in China, peaches are a signal of immortality. It’s interesting to have that in the background of the film.

Haley: Booboo Stewart, who plays a character in the film, lost a bunch of weight for this role. All he was eating was measured amounts of chicken for breakfast, lunch and dinner, and a half a granola bar a day. The scene where he eats the peaches he was really excited about. He got to eat as many peaches as he wanted.

Thomas: He got us to do a whole bunch of takes. “I think I can do better!” I think he lost 25 pounds for this role. Then he went straight from our movie to X Man: Days of Future Past. He then put on 50 pounds.

Is The Last Survivors something you’d like to sequalize?

Thomas: I would love to go back to this world. For me, there are no plans to go back…

Haley: I’m just seeing what Thomas has to say here!

Thomas: I’d love to play in this sandbox again. I would love to do another post-apocalyptic film. It’s an amazing genre.

Who’s this film for, do you think? Who’s the audience for this film?

Thomas: It falls in between a lot of genres. I love films that end up as part sci-fi, part apocalyptic, part western. To some it might be horror. I like that it falls in between, but there’s definitely action.

If the world were to end as it does in this film and you both managed to survive up to that point, do you think you would be able to be a survivor in that world?

Thomas: I’d like to think that I would. I grew up in a desert.

Haley: I grew up in the desert too, but I don’t know if it would come as easy to me as it would Tom. It’s really scary to think about that. I do have survival instincts, but I love life and love people. I would need that. I would try as hard as I possibly could to keep hope going that there’s someone else out there who would keep things going.