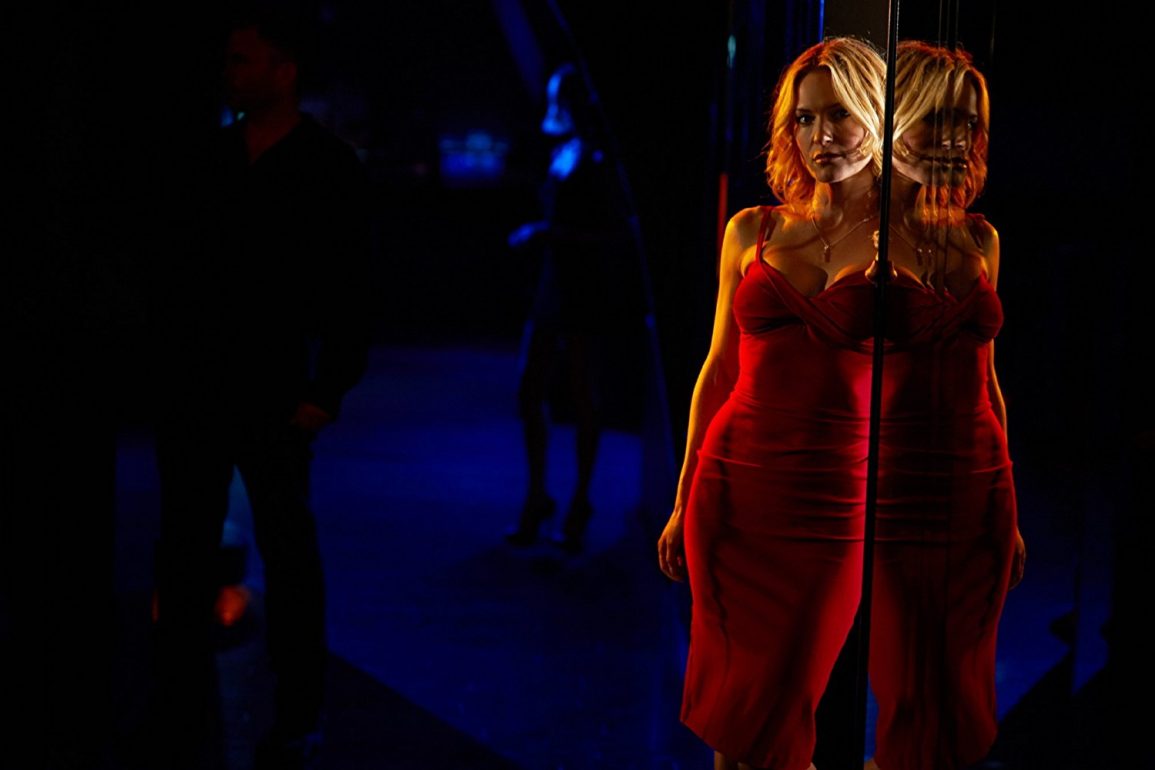 If the real world were a comic book, actress Victoria Pratt would probably be a superhero with a sexy (and most likely revealing) costume. She got her start in the fitness world as a model and martial artist, and after taking acting classes, she scored big on her first audition for a lead role in the T.V. series John Woo’s Once a Thief.

From there, Pratt guested on the popular and iconic series Xena: Warrior Princess, and soon thereafter she landed two back-to-back lead roles in the two sci-fi programs Cleopatra 2525 and Mutant X. Pratt shined in both of the shows, and after the third season of Mutant X ended, she guest spotted in one show after another until landing another lead role in Daybreak, starring Taye Diggs.

She’s back with a number of feature films, namely Death Valley, a murder mystery thriller set entirely in the desert, which is directed by her husband T.J. Scott, who has directed her numerous times throughout her career. Pratt has remained a constant in films and television series’, and her next frontier will be as a novelist, with her first book set to be published this Fall.

I’ve got to start this interview off by telling you that I’m a huge fan of Cleopatra 2525.

(Laughing.) Oh my gosh! You went back into the vault, sir!

I was so bummed out that you guys didn’t get to finish it.

I know! They turned it into an hour-long show, and that wasn’t the right thing to do. I had a fun time on that, as you can imagine.

Your time on Xena must have led you to work some more with the producers Sam Raimi and Robert Tapert on Cleopatra.

Yeah, they were starting up a new show and they were looking for three girls that they’d worked with before – Gina Torres, Jennifer Skye, and myself – and we got our own show. I started Mutant X while I was still being paid for Cleopatra. It was one after the other. It was pretty fantastic. We had fun on Mutant X too. I was really lucky.

These shows appeal to, let’s say, a certain demographic …

(Laughing.) Which demographic do you think it is?

Me, for instance. I’m a nerdy guy. I love watching scantily clad beautiful women running around the wasteland with swords and bazookas. You know, the Dungeons and Dragons set. That’s me. You know what I mean?

I do. I love that crowd, believe me. But I’ll let you know that Xena became kind of a lesbian icon show. I’ve got a lot of lady fans out there who don’t mind seeing me running around scantily clad. (Laughing.) I guess that’s the common denominator! If I don’t have too many clothes on, people might tune in! (Laughing.)

Please tell me a story from the time you had making that show.

We were like the Charlie’s Angels running around in the future, underground, with barely any clothes. There’re a million stories from that. I’m allergic to metal. That’s not very interesting on its own, but the only thing I can’t handle is metal. On the fast turnaround of a show like that, they make mannequins of you. They’ve got digital dolls made of you. You never have to go and try anything on. They just make all the outfits while you’re working and present you with your wardrobe. They gave me a metal dress to wear. (Laughing.) I’m not kidding. It was entirely metal and it covered every part of me. I’m like, “I can’t do it, I just can’t do it.” So they had to make another outfit overnight that was plated in sterling silver, and it was so heavy and it fell off in the middle of a fight, and I was standing there in my panties in front of the whole crew. Everyone was in tears from laughing so hard.

Let’s say the world ends as it does in Cleopatra 2525 and you happened to be one of three survivors in that world. Would you make it as a survivor in a Cleopatra 2525 kind of world?

Oh, yes! I’m a fierce creature! It actually woke me up today. I actually had fight dreams last night. I was fighting and I woke up from it. I was having sleeping, waking fantasies of beating the living daylights out of this person. It was bizarre. That would suit me well in a Cleopatra world. You want to be on my team in a zombie apocalypse, that’s all you need to know!

How did you get started with acting? I know you were heavily into the fitness world and have come from martial arts a little bit.

It actually started through my fitness career. I had contracts with Oxygen and Muscle Mag. The publisher told me to take acting classes. I heeded his advice. He never steered me wrong. My very first audition, I ended up getting a series. It was an action series – John Woo’s Once a Thief. It was a good blend between fitness and acting. My other work is mostly action. Stuff like Cleopatra 2525 and Mutant X.

I’ve got to bring up your guest spots in Xena: Warrior Princess. What was that like for you to be on that show?

It was pretty cool. When Xena was on, that was the height of syndication. Xena was the coolest thing going. It was nice to go toe to toe with one of the big action heroines of my time. It was pretty awesome. Lucy Lawless and I spent a lot of our time naked in that episode, so that was interesting to do.

There’s a little bit of trivia about that on your IMDB page.

Is there, really? (Laughing.)

Was this the period where you met your husband T.J. Scott, who directed many of the episodes you appeared in on these different shows?

Yeah, we met on set. We love working together.

He directed your new movie Death Valley, which gave you both a chance to work together again. Your co-star in the movie is literally the desert itself.

I understand what you mean. I’m still digging sand out of my shoes. I’m only half-joking. We shot it in the spring. It was super cold and then it would get crazy hot. The climate out there is unlike anything you’ve ever experienced. You could be walking around and swear you’re walking on snow with the crunching under your feet. It was a salt field. All you would see in the distance is white, but you’d be sweating like crazy. It was a real challenge filming in the desert, but luckily we cast our friends in it. It was a friends and family project. We would all schlepp the sand bags to the next location. You can’t take a big crew to the desert. You just can’t. We had to keep it really small. Thank God we had the troopers we had.

You wore a beautiful red dress for the first half of the movie. Were you schlepping equipment around in your red dress?

Uh, not as much as I was in my cowboy boots. But I wouldn’t mind schlepping in my red dress! (Laughing.)

What do you look for in a project? What appeals to you?

The thing I like about a lot of the characters I get to play is … maybe it’s just a function of me having biceps and a strong jaw … but I often get to play characters who have an ulterior motive. Even when I was playing a detective on the show Daybreak. I was a detective, I was a good guy, but I was doing bad things. There’s always something else going on. That’s what I like about my character in Death Valley. She’s a church girl who falls in love with a convict, and she has a darker side. There’s a lot of interesting stuff to play in her character.

The thing about T.J. is that he started in the business when he was a kid, so he’s done pretty much everything. He’s been an actor, he had a stunt company, he’s a photographer so he understands lighting and lenses. He understands everything about his job, which means he’s very respectful about everyone else’s job. It’s refreshing to work with someone like that. I still find it refreshing to this day. Often times, you’ll work with a director who has great artistic vision, but they don’t know how to talk to actors. Sometimes they’re great with actors but they don’t have a clue how to get their day. It’s nice to work with someone who knows everything about the film business. Also, he’s just a really nice guy. It’s always a pleasant atmosphere on set when I work with him.

You’ve done quite a few episodics for television. I’ve seen you in shows like Lie to Me, but you’ve been in so many. What’s that like for you to step into an established show?

I’m not going to lie. I like having my own show. I do. I like it. I like coming into work every day and seeing the same people. You get to know your character. When you’re a guest on someone else’s show, you kind of feel like a stranger who’s gone into someone’s house for Christmas dinner. You don’t know anybody and you’re sitting there quietly and might say, “I’ll take some potatoes, please. Don’t worry about me.” It’s a strange feeling. Some shows you feel really welcome, but sometimes you just … it’s weird being a guest on someone else’s show. Especially if you’ve had your own show. It’s strange. But, having said that, I like meeting new people. Film people are generally pretty interesting. If you don’t bring your phone to the set and you can sit there and like talking to people, you’ll end up having a really great time and hear some great stories from great people.

You’ve got a handful of other films already in the pipeline. Is there any you’d like to mention?

Well, I’ve got Death Valley coming out, and I have another one called June. That’s kind of a horror movie. It’s a thriller with the little girl who’s in The Walking Dead. She’s amazing and creepy. That’s coming out this Fall. I also just filmed an episode of Hawaii Five-O, which should be airing in October.

What do you have next on your plate, Victoria? I hear you wrote a novel.

I did! I wrote a sexy murder mystery. They say write what you know. It’s my very first novel. It’s being published this Fall. It will be released in October. It’s called Double Down. I’m well into my second book in the series.

Any final comments about Death Valley and how you’re hoping it will be received?

I can only hope that it’s received well. It was a passion project for my friends and I. It’s personal for us. I hope people like it.