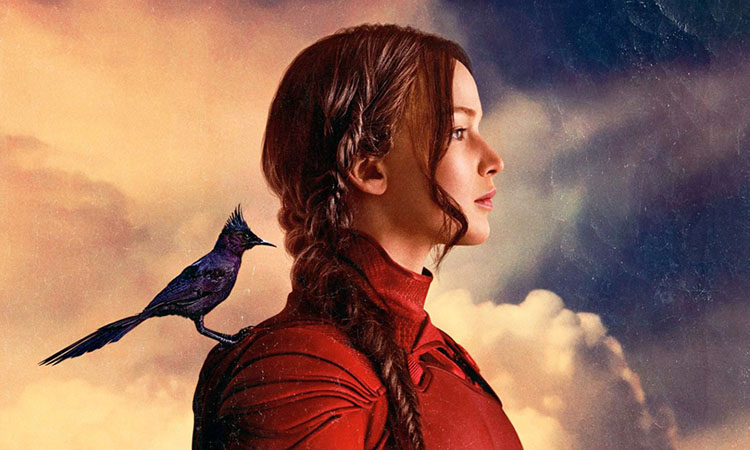 Ve Neill and Nikoletta Skarlatos, the makeup department heads on the immensely popular and successful Hunger Games film franchise, have been incredibly prolific over the last several decades, having collectively worked with some of the greatest filmmakers of our time, including Steven Spielberg, Warren Beatty, Tim Burton, and Martin Scorsese.

Neill herself has won three Academy Awards for makeup effects (for Beetlejuice, Mrs. Doubtfire, and Ed Wood, with several other Oscar nominations to her credit, including two of the Pirates of the Caribbean movies), but as a team, both Neill and Skarlatos have contributed indelible work to the entire Hunger Games series.

In this interview, Neill and Skarlatos discuss their involvement in the post-apocalyptic Hunger Games film franchise, and their thoughts on working with director Francis Lawrence and the talented casts of all four films.

Ve: We took inspirations from the book and the descriptions in the book. We worked closely with Gary [Ross] and Francis [Lawrence] into developing the characters along with the costume designers Judianna [Makovsky] and Trish [Summerville], so the inspirations started with the director giving us his wishes, and of course we had to look at the costuming to see where we would go from there. Our immediate inspirations were taken from the book.

Nikoletta: With each film, we had three different costume designers. We had Judianna on the Gary Ross film, then we had Trish Summerville on Catching Fire, then we had Kurt and Bart who did Mockingjay 1 and 2. That’s where we get into the most post-apocalyptic, down and dirty stuff. In the latter two films. In the first Hunger Games you get a hint of it, but not to the extreme where we ended up.

Talk about the transition of working with both practical effects and CGI enhancements in these films.

Nikoletta: I’ll just say, for example, when Ve make up department headed Pirates of the Caribbean … those make-ups were analogue with the exception of Davey Jones.

Ve: Correct. And then the crew. Those were all hand done. In the Hunger Games and the Mockingjay movies, all of the make-up was hand done. The only time there was CGI was on the mutts and in terms of fire. When Jennifer Lawrence lights on fire. In the last movie, Peeta … we distressed him, but he does have some enhancements where he looks thinner and thinner. It would have been impossible for Josh Hutcherson to have starved himself to that extent. Also, not healthy. The director did not want that. It would have been injurious to him.

Talk a little bit about the design of Tigres. Really interesting design.

Ve: She is described in the book, but not to the extent that is in the movie.  Neville Page and Glenn Hetrick worked on it, and I saw three different designs. Neville gave us three different designs that we were looking at to use. It gave Francis a couple of different looks as to how he finally wanted to create the character. Different shapes of ears and noses and things like that. Most of it was Glenn and Neville working on the design of it. Obviously, Francis had his input.

Ve: Francis is terrific. He is so mellow, and so right on. He is so good at articulating what he wants. He’ll give you choices. He’s very visual, which is very helpful to us. If somebody just gives us an idea, and we try to elaborate on that idea, we give them five different choices, and if they still can’t say yes or no, then they’re not as visual as they think they are, but Francis is very good at getting across what he wanted. He’s so fabulous on set. He’s so giving to everyone – the actors and all the different departments.

Nikoletta: I’m just going to say that both Ve and I have had wonderful opportunities to work with great directors. Spielberg, Tim Burton, Robert Zemeckis … a really great plethora of really great directors. Francis, for me, is in a league of his own. Truly, he is soft-spoken, brilliant, he’s kind, he’s generous, he is encouraging in a way in which I had never experienced. I tease him often that he’s ruined my life. I’ve been very fortunate to work with great directors, but Francis is in a league of his own. God bless him. He’s never changed, not in the time that I’ve known him, and Ve has known him longer than I have. She said the same thing about him.

Ve: I did Francis’s first film Constantine. When I first worked with him on Constantine, I thought, This guy is so fantastic. I hope I get to work with him again. Then he showed up on The Hunger Games, and I went, “Oh my god, this is so cool.” I was really fortunate to do Francis’s first movie with him.

Looking back over these films in this franchise and now that it’s all over, what would you say were the highlights of working on these films?

Ve: I think the highlight for me is was getting to be there and watching these young people become young adults. We forged such great friendships on this film. I just find it really comforting and so fantastic to watch these young people grow up and come into their own and become such incredible actors. Especially Jennifer Lawrence. Oh my god, she’s incredible. She’s a shooting star. All the actors were fantastic. And Woody Harrelson. He’s always really good and he’s always really different in every role he plays. Everybody is so spectacular. I loved working with Elizabeth [Banks]. She was terrific. I can’t imagine anyone else playing her character. We were really fortunate to have such an incredible cast. It’s been a real pleasure.

Nikoletta: The film had a great novelist, it had great writers, a great producer, a great production team – every member of our crew was exceptional, bar none. We had exceptional make-up artists. You can’t have a better environment, really. It’s all of the things we’re saying, and we’re not embellishing any of it. It was all of that. And watching the kids grow up. They’re all so bright and so inspirational. These movies would not have been made were it not for [producer] Nina Jacobson. These were her baby. She carries the torch to higher and higher levels of creative expression. Our hats go off to her. Period.

What do you think it is about these Hunger Games movies that have so captured the hearts and minds the whole world over?

Nikoletta: I think we are living in a time … Ve and I were working on Spiderman, and her nieces were reading these books, and they insisted that I read them, so I read them. These books are really about what’s happening in the world right now. What could possibly happen in the world. About war and peace. About genocide. Poisonous gassing. Overpopulation and extermination and greed. And also good conquering evil. Looking at life in a positive way. Trying to seek joy while we’re on this planet. It’s a mixed bag of messages, but talk about topical and so timely. Everything was so timely right down to the way we created the make-up. We tried to be contiguous to what’s happening to the world today. It’s a pretty salient movie. It’s a movie that’s for children, so it’s not so grotesque that one can’t delineate the meaning in a positive way.

Nikoletta: These movies appeal to all ages, but they’re oriented to the youth. They’ve been given a great gift, a great message to take with them as they grow up and grow on with life. Choosing peace in the world, if you will.