Fans of martial arts will be just as satiated as hardcore purveyors of post-apocalyptic material making Into the Badlands a must-see.

Plot: The series stars Daniel Wu as ruthless, prodigiously skilled warrior Sunny, who mentors teenage boy M.K. during a spiritual journey across a feudal civilization known as the Badlands. With the help of trained assassins like Sunny, the area is ruled by rival barons, and for decades Quinn has consistently outflanked and outmaneuvered his fellow barons to keep the upper hand. His invincibility, however, begins to fade in light of brazen attacks by the newest baron, The Widow, who believes M.K. is the key to her success. As the battle for control of the Badlands heats up, the destinies of the stoic assassin and the impetuous teenager become intertwined.

Review: Centuries after the world was destroyed following a series of wars, civilization was rebuilt from the ground up by seven Barons who each govern stretches of land in America, namely the South. Each Baron has their cadre of “Clippers” – mercenary soldiers, samurais, ninjas, or assassins – who are at their beck and call. One such Clipper is a subservient of his Baron, the ruthless Quinn (Marton Csokas), who has developed a brain tumor that clearly marks him for a limited number of days before he’s usurped by his unruly son, untrustworthy wife, or any number of others who want him dead. The Clipper – a martial arts proficient samurai-type named Sunny (Daniel Wu) – finds that he finally has a crisis of conscience after years of servitude to his evil Baron, and when a mysterious boy named M.K. (Aramis Knight) arrives, bearing the sigil of a faraway land rumored to be free of feudal laws and infighting, Sunny must protect the boy in order to find redemption and a new path in life, as the boy has powers beyond imagining and a promise of things to come …

Season 2 detailed the final conflict between Quinn and Sunny, as Sunny’s infant son becomes the object of everyone’s interest, as he is born with a dark power that is revealed only when his blood is drawn. Sunny, who has been banished to the Badlands, quests to return to his beloved Veil (Madeleine Mantock), who is now the captive of Quinn and his army. Sunny teams up with a maverick martial arts master named Bajie (Nick Frost), who is a former pupil of a powerful figure known as The Master, who lives in a mystical monastery and bides her time waiting for the ultimate showdown with an enemy that has yet to rise. Meanwhile, M.K. loses his dark power and becomes a drug addict, while his new master – a formidable female fighter known as The Widow (Emily Beecham) – gathers her forces to move in on the other Barons to take over the Badlands.

The third and final season (at 16 episodes, the longest season of the series) details the lead-up to the fantastical climax between Sunny, Bajie, and anyone who is willing to join them against the great enemy of the land: The Pilgrim (Babou Ceesay), a zealot from the long lost mystical land of Azra, where Sunny is also from. Azra was the last bastion of human civilization after the world fell, and where science was modified with some magic to create and harness the dark power only some very few are gifted with at birth. The dark power will be The Pilgrim’s ultimate weapon to cleanse the badlands and beyond, but first he needs Sunny’s infant child to steal the power from. Once The Pilgrim comes into power (along with his soothsayer witch lover), no mortal force – including Sunny’s impressive skills as a former Clipper – can stop him.

After a resurgence of post-apocalyptic T.V. shows yielded the likes of hit or miss shows like The Walking Dead, Defiance, Falling Skies, Terra Nova, 12 Monkeys, The 100, and Z Nation, along comes this fresh spin on the sort of thing we’re familiar with, but told a little differently with cinematic and elaborate martial arts sequences the likes of which have only been seen in big motion pictures. What’s interesting about Into the Badlands is that there are no guns of any kind to be seen (until literally the last few moments of the series), although automobiles still work (they’re scarce), and magic and mysticism is quietly prevalent. The plot of the show is nicely sustained through the first six episodes of the program, and the arc of the whole thing seems to rest on the teacher / pupil element between the characters Wu and Knight play. Bonus additions of having classy actors like Stephen Lang, Cung Le, and Lance Henriksen come in to do supporting roles really elevate the proceedings in a big way. Fans of martial arts will be just as satiated as hardcore purveyors of post-apocalyptic material. From creators Miles Millar and Alfred Gough, who both collaborated on another post-apocalyptic show concurrently, called The Shannara Chronicles.

Lionsgate recently released the third and final season of Into the Badlands on Blu-ray + digital. 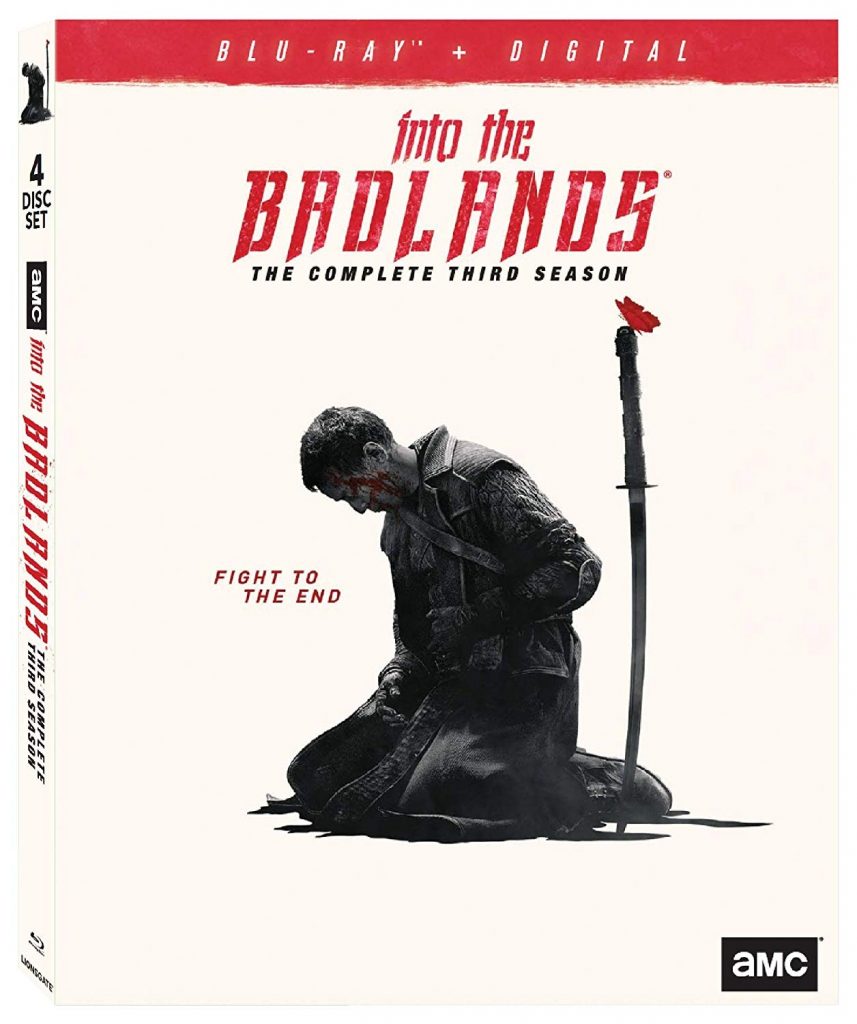