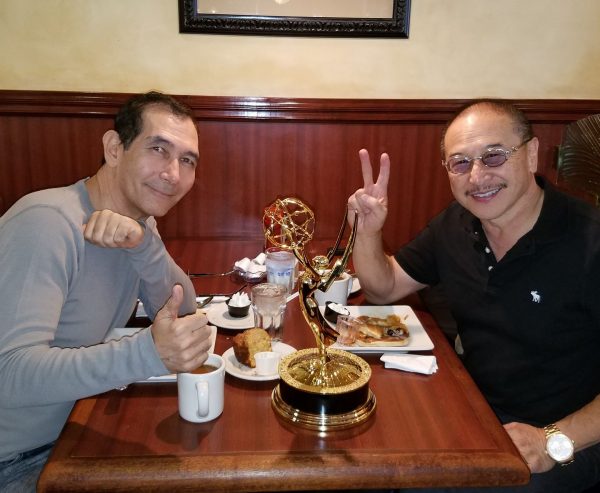 Saw the meeting you had with Emmy winner James Lew, discuss the meeting and how far along is the development of The Martial Arts Kid 2?

We are in early stages of fund raising and we are developing 2 separate story lines based upon availability of the actors we want. The good reception we had in The Martial Arts Kid is carrying over so some things will be easier but at the same time its more difficult due to continuity issues…some actors were young and look older so we are looking to make it all work with a believable time lapse as well as reasons for it. We have solved that though and are looking at adding some new characters that will be interesting to see too.

Looking forward to that, are you going to go the Kickstarter route as you did in the first film?

The crowd funding campaign we did for TMAK raised about $173,500 if I remember correctly. That extra made it possible for us to shoot on location in Florida. And it was a very good marketing aid getting the word out on what we were trying to do. Cheryl Wheeler-Sanders, Dr Robert Goldman, Don & Cynthia all agree that getting people involved directly like this is not only helpful but a good thing. It is our hope that the movies we make will always have a positive message and do some good. And we want to keep doing projects that demonstrate the best aspects of martial arts besides just kicking butt. Although the sequel PAYBACK is going to have quite a bit more action than the first. With Chuck Zito as the villain how could it not?

Self distribution is risky in this business. Being able to self distribute, having access to the digital platforms, being able to produce your own DVDs & Blu-Rays changes the game. For us, having a genre like martial arts, where each of us is a member of the community is helpful. It is not easy but we are doing fairly well and learning quickly. We are also fortunate to have Gorilla Pictures working with us as well. Once again family is involved because the CEO there is Don’s brother-in-law Bill Gottlieb. It is a good fit as Gorilla Pictures has a track record with action, martial arts, and family films.

Thanks James for your insight.

For more information on The Martial Arts Kid, and to purchase the DVD, point your browsers to: http://www.martialartskidmovie.com/ https://www.facebook.com/MAKMovie2014/

Watch for more exclusives when production ramps up in 2018, on The Action Elite.

Special thanks to Master James Lew for the photo.