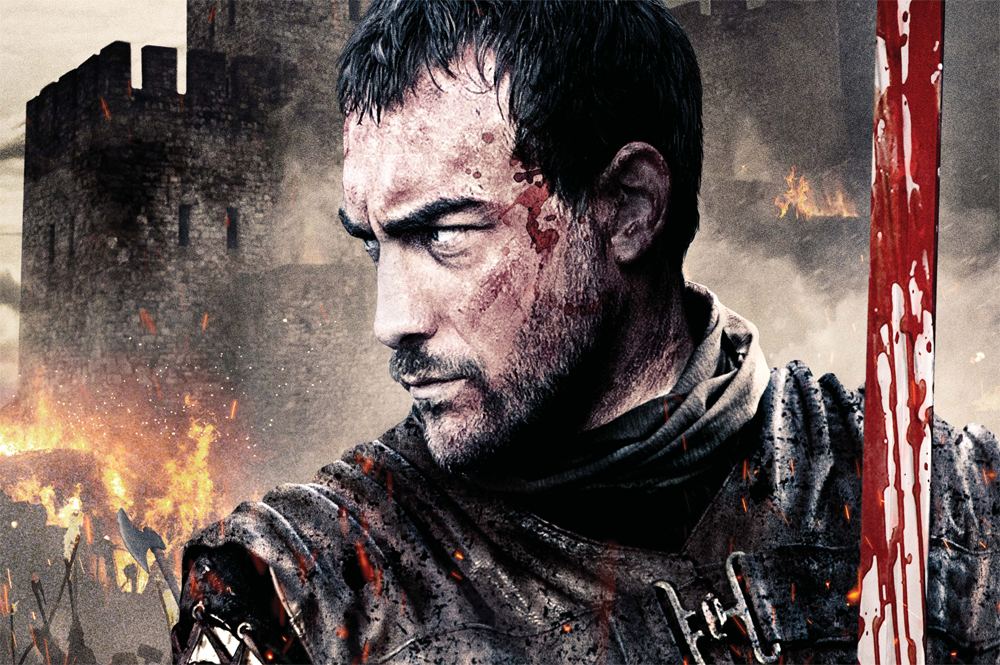 In this exclusive interview, we chat with ‘Ironclad; Battle For Blood’ director Jonathan English.

Travelling back to the dark, brutal past of 13-century England, IRONCLAD 2: BATTLE FOR BLOOD plunges us headlong into one of the most violent periods in English medieval history – a few good men fought against insurmountable odds to defend their country from bloodthirsty Celtic Tribes.

IRONCLAD 2: BATTLE FOR BLOOD is the continuing story of honour, action and excitement.

Ironclad: Battle for Blood had some great action sequences; what kind of challenges did you face putting them together?

The action sequences always take a lot of planning and preparation. It starts at the script stage really, the Ironclad scripts really detail out the action in moment to moment beats, the violence, the details, the mini skirmishes, the overall arc of the action all goes into the script. So then, once we’re in prep its get broken down by the different departments who will all be involved, most importantly, Stunts, Special physical effects, props and make-up effects. Everything is choreographed and rehearsed with the stunt team and then with the actors. Of course, there’s never enough time to plan and rehearse everything and often we are improvising and working out fight scenes there on location the day of the shoot. The big challenge is you want the fights and action to be as exciting and dramatic as any movie, but competing with big action scenes of a studio epic with an independent budget is a real challenge. And doing it safely, making sure no one gets hurt is always my up-most priority. You have to remember, as real as we want it, it’s still only a movie!

When you made the first film; did you always want to do a follow-up and what made you want to return to this world?

When I wrote and developed the first film I came across a lot of stories from the medieval period which I thought would make great films on there own. That and an overall love of the genre which didn’t go away after we finished the first Ironclad. If anything, it probably deepened. I’ve loved castles since I was a kid and growing up in England had the opportunity to visit many. My fascination for them has never gone away, and even now, after two films in the period, I still find the medieval era a wonderful and dramatic landscape for film-making. So, after the first film became successful and we were approached to do a sequel no one had to twist my arm.

Can we perhaps expect a part 3 in the future?

A third IRONCLAD movie has already been talked about and, certainly, if the audience is there for one I would love to consider a part 3. I guess we need to see how part 2 does first.

I think my favourite character was Crazy Mary, played to perfection by Twinnie Lee Moore. Any chance of a prequel spin-off for her? How did you find her as she really was fantastic in the role?

Thanks, I think she would be thrilled to hear that! Especially as it’s her first ever role in a movie. She was discovered by our casting director, Kelly Valentine Henry, she auditioned and blew us all away. Twinnie has an interesting background as originally she is a singer/song writer. She really got into the role and embraced the wretchedness of the character but always, I felt, gave her an edge of pity behind the menace. There’s no doubt that medieval women had a very hard existence and I think Twinnie did a wonderful job of bringing that to the screen. She has a big career ahead of her.

I’m not going to lie; I love how bloody the movie is. It makes the violence feel far more visceral. Was it important to keep the violence as realistic as possible?

Yes absolutely, and that’s really been the signature of both films. In fact, if I had my way, I would go further, but with time, schedule, budget its always tough. I don’t think you can emphasize enough how frightening and violent a medieval battle would actually have been. That was always a key concept that drove the first film, and while there were a number of different emotional themes in this sequel, I still wanted to give the action the same visceral, realistic quality. Hopefully, it’s what sets it apart from other movies in the genre as well.

The stealthy invasion through the toilet was particularly inventive; how did you come up with that?

Well, like many details in the films it’s based on research. These toilets existed, they’re called garderobes, and they had openings out to the castle walls and sometimes the enemy would try to gain access through them. There is a recorded incident when this happened at Chateau Galliard in France which was an English castle held under Richard the Lionheart, I believe, and during a siege there a soldier crawled up through the garderobe and tried to open the gate.

The ‘sword and sandals’ genre has been around for a long time and TV shows like Game of Thrones and Spartacus have really helped to introduce the genre to a new generation. What do you think is the enduring appeal of the genre?

Its certainly a period in history that captures the imagination across a wide spectrum of people, both from childhood to adult. There is something magical about castles when you visit them, and that’s true for people all over the world. Particularly in America, where there are no castles there’s a lot of fascination for them. Also, the life style of characters from the period really captures our imagination. It was a fairly lawless society in which many people bore arms, there were duals, murders and battles, life in that times was harsh and cruel. And yet, as always we find romance, humor and love too, all the things that make us human. For literature and film its clearly a great canvas and easy to see why generations have enjoyed the middle ages, whether its with a fantasy element like Game of Thrones, or Lord of the Rings, or as real history like El Cid, Robin Hood, or Braveheart. One of my all time favorites is a Charlton Heston film from 1965 called THE WARLORD. That had a big influence on me.

The subject of Scottish independence is quite topical; was that in the back of your mind when putting the film together?

Well growing up in England, Scottish independence was always topical, like Welsh and of course Irish independence. Certainly I was very aware of it but more so from a historical standpoint. During the middle ages the feuds between the Scottish and English were famous, just as there were conflicts on most of the English borders. Braveheart of course immortalized this forever but I thought it might be interesting to tell the story from the point of view of a English or Norman family living in a castle on the border.

Are you able to tell us anything about The Killing House or your other upcoming projects?

Well The Killing House is in development, but my next project is a film called DIAS and its about an elite motorbike unit of the Greek police. So unlike Ironclad, its a contemporary story set in modern day Athens, Greece. I’m very excited by the project which we’ve been developing over the last year with members of the real unit. It will have a lot of high speed car chases and intense action but also focuses on the human story of one of the most dangerous police units in Europe.

You’re welcome. Thanks for the great questions and delighted you enjoyed the movie!

IRONCLAD: BATTLE FOR BLOOD In Theaters on July 25th and on VOD and i-Tunes on July 11th