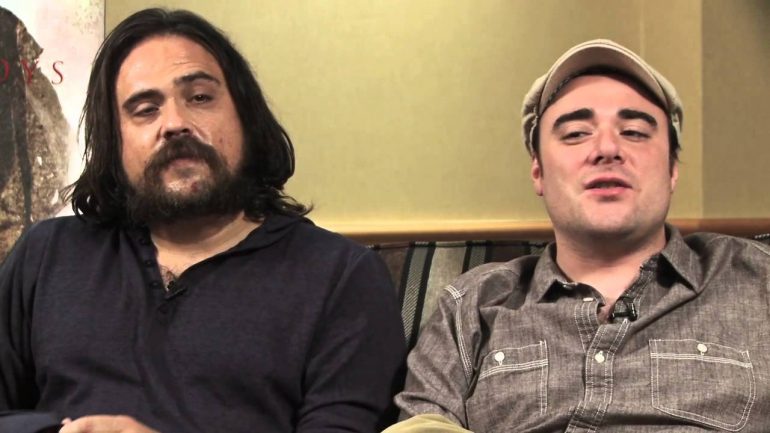 If you’ve been paying attention, the western genre has been making an auspicious comeback over the last year or so, with high-profile films such as The Hateful Eight, Bone Tomahawk, Jane Got a Gun, and Forsaken playing at multiplexes nationwide.

On March 1st, the horror western hybrid Kill or Be Killed will be released onto DVD, and it’s a doozy in much the same way that Bone Tomahawk was.

It stars Justin Meeks as the leader of a band of cutthroat raiders riding cross-country while a posse chases them, but also on their trail is the grim reaper, come to collect their hides.

In this exclusive interview with The Action Elite, co-writers and directors Duane Graves and Justin Meeks discuss their work – including their previous two films The Wild Man of the Navidad and Butcher Boys – and their latest effort Kill or Be Killed.

I’ve been following you guys since I saw your first film The Wild Man of the Navidad. I also saw your second movie Butcher Boys, and now you’re both full circle here with the horror western Kill or Be Killed. It seems like your ambitions and your budgets get a little bigger with each film. Talk about your ambitions for these films and being able to do a western like Kill or Be Killed on a budget.

Justin: The Wild Man of the Navidad was a seven thousand dollar budget. Duane and I had been doing shorts back then. We had the confidence to do a feature. We did what we had to do. We did it on the weekends. Then, Butcher Boys had a full on cast and crew. With this one, we were able to have a decent sized crew as well. Each one of those movies has been an education in itself. Each one of them is like four years of film school. We keep learning and applying what we learn. We’re writing another script right now called Choke Canyon. We don’t just stick on one movie. We want to keep rolling around and hopefully we can put our signature on each movie.

Duane: Each movie almost feels impossible to do. We always like to bite off more than we can chew, just to prove that it can be done. With Butcher Boys, that’s what it felt like. It was more of a sink or swim. We’d never experienced a production of that magnitude before. With The Wild Man, we were in the woods with three or four friends. All of sudden, we’ve got 75 people on the next movie looking at us what to do. We had to build sets. If all these people can come together with a common goal, it’s not impossible, but it’s a challenge. There so much more than just directing. You have to wrangle it all.

Justin: We were constantly on preproduction with Butcher Boys. We talked about it, every detail. Now we can prove we can do it and pull off a western.

Wild Man was your take on the Sasquatch legend, and Butcher Boys was basically Judgment Night crossed with Texas Chainsaw Massacre. Kill or Be Killed is your riff on the Euro-ultra violent western from the late ’60s and early ’70s. Talk about your influences a little bit.

Duane: Our biggest influence was probably Charles B. Pierce, who directed The Legend of Boggy Creek and The Town That Dreaded Sundown. A lot of people don’t realize that he directed about five westerns – stuff like Winterhawk, Grayeagle, and Hawken’s Breed – that were all extremely good. They deserve to be seen. They are fine examples of independent, pure organic, westerns with stars done on small budgets. They also have streaks of darkness in them. He was a horror filmmaker. We took a lot from him. We also like the ’60s, ’70s westerns by Sergio Leone and the Clint Eastwood westerns after he came back to America like High Plains Drifter.

Justin: Absolutely. We also came from doing a fast paced movie such as Butcher Boys. It was nice to make this western in an anamorphic lens. We were able to let the action go on. It was such a nice change. Like Duane was saying: High Plains Drifter and The Good, the Bad, and the Ugly. Once Upon a Time in the West. There’s some magic in those westerns. We wanted this to be a western, but still have that signature that we have with the darkness creeping through.

Kill or Be Killed is a chilling, violent western. Justin, talk about the fact that you’re playing the leader of a band of cutthroats in this film.

Justin: Right, right. Duane and myself wrote the script, and we also kept in the back of our minds that we wanted these guys to be dirty cutthroats. Whatever it took to get what they wanted. The selfishness that that lifestyle brings about. At the same time, we wanted the audience to root for them and like them a little bit. We took some time in how we planned everything out. We wanted to show their human side as well. It’s definitely twisted, though.

Duane: We border the line between good and bad. Justin is playing a bad character, but he’s not evil. Some of the other gang members are evil. Evil versus bad is two different things. A good example is the character Blockey in the movie, played by Gregory Kelly. He’s a loose cannon. Justin’s character keeps him in the gang because he’s loyal to him. He’s protection even though Blockey has done some horrible things. It’s an Of Mice and Men sort of mentality. We touch on that a little bit. The outlaws. The loyalty is to the gang. It’s hard to like that sort of group and their intentions. It’s a soup. You throw in all this stuff and somehow it makes it tastier. We start off being like a John Wayne movie, and then it gets darker and the tone is a full-on horror film. It was not by accident.

The western genre has never gone away, and I’m glad to see that it’s making a little bit of a comeback, but I’m concerned for a little film like Kill or Be Killed. How are you guys expecting to find an audience for this in this day and age when everything is streamed and illegally downloaded?

Duane: You’re right. We shot this two years before Bone Tomahawk, we don’t have Kurt Russell. We’ll be out on Wal-Mart shelves on March 1st. That’s a huge reach. What happens is word of mouth. We need people to talk about it. We need people to recommend it. It doesn’t have star power, but it happens all the time with these independent movies. We can be successful in a small way. It might take awhile, a year. I don’t know. We’re sitting and waiting. We’ve been sitting and waiting. We’ve been sitting and waiting for this western wave for years. We thought it was going to hit after Django Unchained. We’ve been done for more than a year. To be honest, we don’t know. We’re waiting for the world to decide where it goes.

Justin: We are smack dab in the middle of great wave of westerns. People are hot for them. What we have is story-wise on the same level as any of the new westerns coming out. We don’t have the same budget, but if you watch it, I think it’ll fool you. We’re just hoping for the best. With the reach of our distributor RLJ, I think that won’t be too hard. It’ll be out nationwide.

You mentioned Bone Tomahawk, which was a great western / horror hybrid. I would put your movie right beside it. What did you guys think of that?

Justin: The first time we saw it, we went, “Holy crap!” A horror western came out right before ours.

Duane: Not only that, but we have the same distributor as Bone Tomahawk!

Justin: If they can push us in the same direction as Bone Tomahawk, I think we’ll do okay.

Duane: It’s great, because that movie broke the ice of the horror western, which we were going to have to do by ourselves. It cracked that, and everyone’s talking about the melding of the two. That’s helped us usher it in.