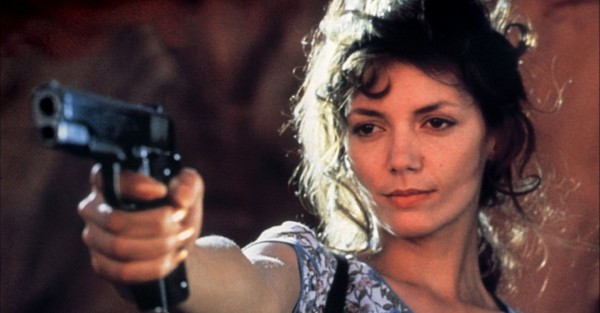 Although the cover art for the disc is kinda crummy, the high definition transfer is crisp and vibrant and looks leagues better than the old MGM disc. Sadly, there are no special features. Pick it up, though. You’ll be glad you did.

Synopsis: A young detective becomes involved with a beautiful woman on the run from the mob and her psychopath boyfriend.

Review: Vince (Michael Madsen) and Fay (Joanne Whalley-Kilmer) just robbed a suitcase full of money from a dangerous man, but Vince laughs it off after cold bloodedly murdering another man. They go on the lam, and Fay does something that she should never have done: she double-crosses her psychotic boyfriend and leaves him in the dust. Her next step is to fake her own death, and so she goes to a head hanging private eye on his last gasp just before he looses his business. The private dick is Jack Andrews (Val Kilmer), who gladly takes up her offer (she pays well), and so he helps stage her death and takes photos. Within a day or two, all of a sudden Jack is accused of Fay’s murder (even though she’s alive), and he’s dodging the cops and Fay’s ex, Vince, who comes calling on him, slamming him through walls and throwing him clear across the room to get answers. The only way for Jack to survive this ordeal is if he somehow manages to ditch Vince and find Fay on his own, and when he finally does just that, he realizes that Fay is a low down, double-dealing broad who would stab him in the back if he looked the other way. How is a private eye to proceed?

A true blue film noir with a heart as black as pitch, Kill Me Again was the first film from director John Dahl, who continued on this path with the fantastic films Red Rock West (with Nicolas Cage) and The Last Seduction with Linda Fiorentino. It all started here with Kill Me Again, and the late night cable mood is appropriately smoky and sultry with solid performances from the leads, particularly from Madsen, who steals the show with his maniacal laugh and smirk. Kilmer and Whaley had great chemistry (this was their second film together after appearing in Willow).

Olive Films has just released Kill Me Again onto Blu-ray, and though the cover art for the disc is kinda crummy, the high definition transfer is crisp and vibrant and looks leagues better than the old MGM disc. Sadly, there are no special features. Pick it up, though. You’ll be glad you did.