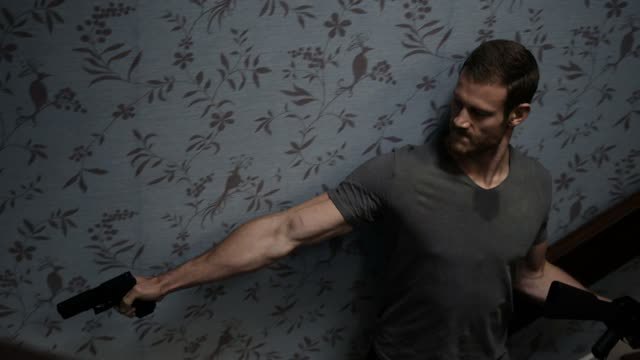 Kill Ratio can’t quite play with the big boys yet, but it’s got nice, shiny training wheels. If there’s a Kill Ratio 2, let’s see some real muzzle fire and some real blood squibs.

Synopsis: An attack on the new President of a fledgling Eastern European democracy pits an American covert operative against the country’s ruthless military leader determined to seize control of the government.

Review: A summit is called for during peacetime in an Eastern European country, and a covert agent – a “fixer” – named James Henderson (Tom Hopper from Black Sails) is sent in to oversee the meeting that will be an opportunity for American businesswoman Gabrielle Martin (Amy Huberman) to get to meet the president of the country (Lacy Moore). But during the summit at an upscale hotel, a coup begins, thus setting the course of a long night as Henderson must protect the president and Gabrielle from a wave of cutthroat soldiers under the command of an evil general who intends on executing the president on live television. Using hundreds of rounds of ammunition, knives, swords, and good old-fashioned muscle, Henderson proves to everyone around him (especially the bad guys) that he’s the one component no one was counting on.

A commendable action throwback to the early direct-to-video days of Jean-Claude Van Damme, Dolph Lundgren, and Steven Seagal, Kill Ratio has most of the things that make “B”-grade actioners watchable and entertaining (including a front and center star who might emerge as a bona fide action star someday), but the one huge detriment against it is that all of the gun fire, muzzle flashes, and squibs (including the blood splashes and discharged bullet casings) are CGI’d and phony looking. Even the explosions are cheap CGI jobs. It’s a major deficit that absolutely can’t be ignored. The guns all the characters hold might as well have bright orange toy tips on them. I liked what Kill Ratio was aiming for, and it could’ve gotten there … It’s a shame the producers of the film couldn’t pony up enough cash to give their film the one simple thing that make action movies legitimate. Kill Ratio can’t quite play with the big boys yet, but it’s got nice, shiny training wheels. If there’s a Kill Ratio 2 (which there certainly could be), let’s see some real muzzle fire and some real blood squibs. It’s essential. Directed by Paul Tanter.

Kill Ratio will be theatrically released on December 9th and on VOD and iTunes on December 13th.