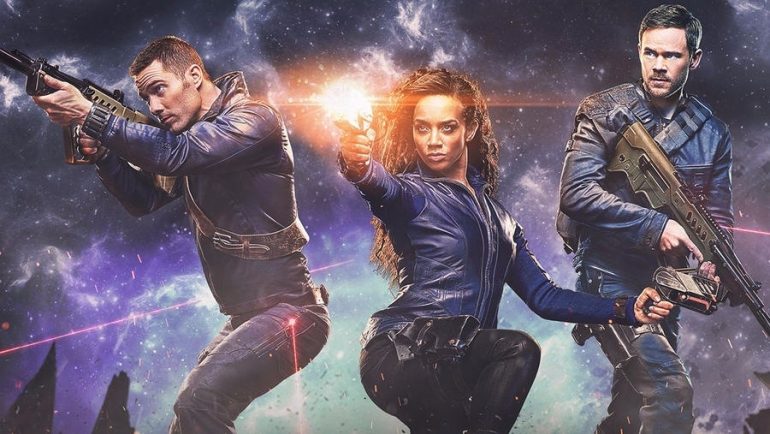 Plot: A trio of hard-living bounty hunters – Dutch (Hannah John-Kamen, The Hour), John (Aaron Ashmore, In Plain Sight) and John’s older brother D’avin (Luke Macfarlane, Over There). Working for the Reclamation Apprehension Coalition (RAC), they work in a four planet-and-moon system known as the Quad. Taking on warrants to apprehend people or property, RAC Agents are given high authority by their agency while swearing to remain neutral in conflicts and owe no allegiance to any system, government, or other organizations. With their pasts coming back to haunt them, the trio will have to work hard to keep themselves, and their friends, alive.

Review: I’d been meaning to get into these other remaining Canadian Sci-Fi TV shows for awhile, especially because they had similar themes, worlds and characters much like what we see in films/shows like Babylon 5, The Fifth Element, Star Wars, Farscape and Star Trek. This show came out a month after Continuum and a week after Dark Matter yet despite the fanfare and lasting five seasons, I could never make time for it. Fortunately, Spectrum internet allowed me to view this whole thing on the On Demand option for SyFy Channel and it helped that there were no ads, just three brief 5-seconds each ads for the channel’s various geeky cult references so I didn’t have to wade through any skincare or car insurance ads repeatedly!

As for the show itself, it’s quick, fast and always has your attention and much like all Continuum and Dark Matter, it develops a quick mystery to keep you coming back while having a different exploration or mission each week. That often works best for any show and as a result it’s no exception here. The series avoids feeling derivative by never feeling restricted to being set inside a spaceship or only one one planet and its visual effects are never shabby- probably because they’re only used to tell the story. The mysteries never click right away but keep your attention due to the witty banter, stylish flashbacks and making it clear right away that this all means something bigger and that the show isn’t playing any random mind-games with viewers. It’s got the action of Wars without the bad acting or cheesy plotting; the cyberpunk and philosophical type nature of Star Trek and Babylon 5 type prophecies minus relying on just the tech or spaceship-based encounters; and the bounty hunters and criminals of Farscape. It’s an easy buy or rent depending for its popcorn type nature while remaining somewhat deep that even the hardest Sci-Fi genre enthusiast should be able to embrace it without feeling like it’s too derivative or familiar. Out of this new trio of genre shows, I would say that Continuum has a far better thrill ride for making time-travel fresh yet fascinating again while Dark Matter has the way better plot since it’s never got a dull moment in its outer space mystery. Killjoys is definitely inbetween these two by having a healthy mix of both thrills and plotting. It’s at various places without having its enjoyment factor or plot be all over the place yet doesn’t feel as notable. However, it’s engaging enough due to the different locations and once the various subplots start adding up, it definitely becomes far more fascinating.

I’m only using these different show comparisons just to give a greater idea for who the audience is for this. This show definitely has a more comfortable feeling to its various proceedings and it helps that all three characters get equal screentime so no one ever feels like they’re hogging the scenery. It feels like it wants to add its two-cents to the various genre tropes while not always add something new but it again does it without feeling like falling victim to too many often-repeated routines. Those all definitely keep it more focused without feeling like any episodes were done because of budget restrictions or the writers not coming up with enough material for a season. All five seasons last 10 episodes and they definitely did the homework on which episodes have to have reveals and which ones have to have side missions that lead to the final resolution. So again, enough change-ups keep it both unpredictable and never redundant while making it feel like a just as delicious entree to an already wonderful fancy meal.

The show is available on most platforms yet is never often the most visible when scrolling through the various options. If you want to do the search, it definitely won’t let you down. This definitely deserves a bigger fanbase despite having already gotten reasonable reviews and it is that rare mix of laid-back yet involving enough that it engages both types of audiences. And for having that relaxing combo while being engaging for both genre fans as well as non-fans, it definitely deserves more appreciation.