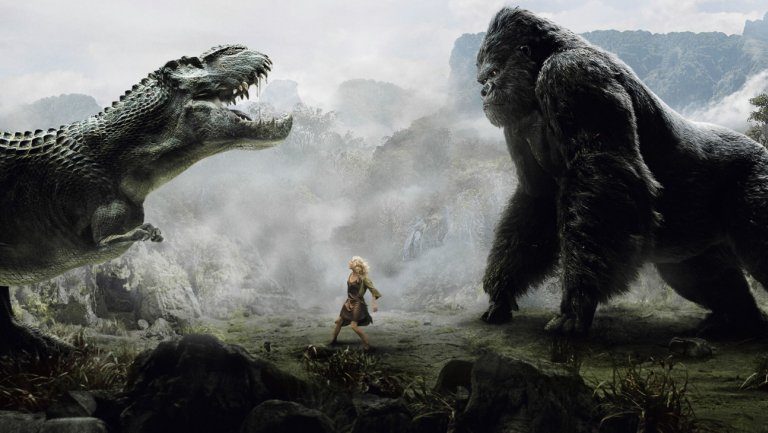 King Kong is a great film with superb directing and visual effects, adding more to the evidence that Jackson and Serkis deserve all the praise they receive. The running length is the only major problem and that’s subjective.

Plot: Peter Jackson’s expansive remake of the 1933 classic follows director Carl Denham (Jack Black) and his crew on a journey from New York City to the ominous Skull Island to film a new movie. Accompanying him are playwright Jack Driscoll (Adrien Brody) and actress Ann Darrow (Naomi Watts), who is whisked away by the monstrous ape, Kong, after they reach the island. The crew encounters dinosaurs and other creatures as they race to rescue Ann, while the actress forms a bond with her simian captor.

Review: I didn’t think much about King Kong when I first saw it, yeah it was good but it was too long to keep my interest. That was a few years ago and I haven’t seen the film in a while, this time around I enjoyed it a lot more but it’s still too long.

I’ll start easy with the acting, everyone is serviceable in their roles, no-one has anything truly difficult to do but they don’t ham it up or just float from scene to scene. Naomi Watts was a good choice for Ann, she’s got an angelic look which means you can understand why Kong falls in love with her but also you can never hate her for all the screaming she does (And she does do quite a lot). Not only that but Watts is a good actress so I’m glad they just didn’t pick any pretty face for the character, Watts manages to make her fear and terror and sadness all feel real.

Adrian Brody was good as Jack, he fitted the writer role better than the gun-toting one, his ‘Save the girl’ attitude bugged me a little but not enough to hate the guy. Also I didn’t like how quickly he and Ann fell for each other, it seemed like ten minutes went by and suddenly they’re in love. I don’t hate the character of Jack but I do think he could’ve been cut out and not a lot would’ve been missed.

The film did have two great roles though, firstly Jack Black as Carl, this is probably one of Black’s best roles outside of a comedy, he really sells the desperate producer act, he lies, he cheats and he might as well have stole, all to get himself out of the gutter. He’s never shown to be a villain or slimy he’s just a man pushed to edge and wants to have his time in the limelight.

The second great role is Andy Serkis as Kong, Serkis showed he could use motion capture to great effect with Gollum and he’s no difference here. He makes Kong’s animalistic actions and voice all authentic and frankly quite brilliant, it’s hard to believe that it’s a man instead of just plain C.G.I. but Serkis makes the character and the role his own.

Now after watching the LOTR trilogy I know Jackson is a great director and here is just more evidence, he manages to create an epic scope of this world that time and God has forgot, from, his nightmarish Tribal attack to his sweeping shots of New York and the jungle. Jackson really has an eye for the camera and he knows how to shoot a good action scene, the T-Rex battle is a highlight of the film and Jackson does a fantastic job of it all.

The visual effects are also sublime, Kong looks utterly convincing, not as good as he did seven years ago (Christ this came out seven years ago) but still great, in a close –up near the end of the film you can see every single hair on his face which even today is impressive. The destruction Kong causes in New York and the panic that everyone has is also wonderful to observe especially considering that Kong isn’t really there, for a few seconds you almost believe he is.

Now for the downside, as I’ve said before the film is too long, I’m fine with long films but this felt like it could’ve lost about 30, 40 minutes and it would still be a great film. Even some of the action scenes drag a little, the T-Rex fight, while a highlight, did go on a bit. It’s not enough to make me bored of the film, but it’s enough to make me lose interest for a few minutes.

Overall, King Kong is a great film with superb directing and visual effects, adding more to the evidence that Jackson and Serkis deserve all the praise they receive. The running length is the only major problem and that’s subjective. Definitely see this one and form your own opinion.