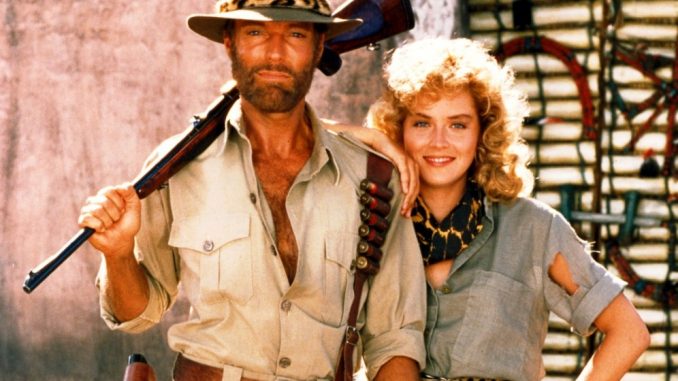 The new Blu-ray of King Solomon’s Mines is a must have for fans.

Synopsis: Fortune hunter Allan Quatermain teams up with a resourceful woman to help her find her missing father lost in the wilds of 1900s Africa while being pursued by hostile tribes and a rival German explorer.

Review: Cannon’s knee-jerk reaction to the first two Indiana Jones movies casts Richard Chamberlain as H. Rider Haggard’s treasure hunter / fortune seeker Allan Quatermain and a young Sharon Stone as a Midwestern Archaeologist named Jesse who’s in Africa looking for her kidnapped father, the only person alive who knows the way to King Solomon’s fabled mines of limitless riches. A pompous German militant (played by Herbert Lom) and a Turkish slave-trader (played by John Rhys-Davies for that Indian Jones facial recognition) are exactly two steps and a gun barrel behind Quatermain and Jesse as they miraculously dodge their every move. While hopping trains, planes, and a giant cauldron intended to boil them alive, Qautermain and Jesse become a hot item in the jungles of darkest Africa, and their adventure takes them from one death-defying cliffhanger to the next, with nary a break in between.

For every knockoff of a blockbuster movie that makes you slap your forehead with exhaustion, there’s always that one or two really good ones that manage to have a life of their own. Cannon’s King Solomon’s Mines is such a fun movie with its own sense of inspiration that I don’t really think it’s entirely fair to call it a rip-off. Haggard’s novel had been adapted several previous times (and would be adapted several more times in the future, most notably with Patrick Swayze), but never had it been adapted with as much gusto or good humor as it was in this film, as directed by J. Lee Thompson and screenwriters Gene Quintano (Treasure of the Four Crowns) and James R. Silke (Revenge of the Ninja). The jokes come a mile a minute, and they mostly work, and even though Chamberlain and Stone had terrible off-screen chemistry, they worked really well together on screen. Jerry Goldsmith provided one of his biggest and most adventurous scores ever for this film, and it immensely bolsters the enthusiasm of the pacing. Cannon filmed Allan Quatermain and the Lost City of Gold simultaneously, though it lacked the spark of this one and was subsequently released two years later. Cannon also released a similar film called Firewalker with Chuck Norris in 1986.

Olive Films has just released a Blu-ray of King Solomon’s Mines, and as this is a movie I’ve returned to from time to time over the years, I can say that it looks solid and firm in high definition. I didn’t notice any fading, blurs, or shadows in the transfer, which is good. The sound quality was markedly improved over the previous DVD from MGM some 15 years ago, and other than the high definition transfer itself, the disc doesn’t include any special features (although I guarantee you that Gene Quintano has some great stories about the making of the film). The packaging of this release is nice, and I appreciate Olive bringing this to blu ray, and it goes nicely with their previous release of Allan Quatermain a year or so back.