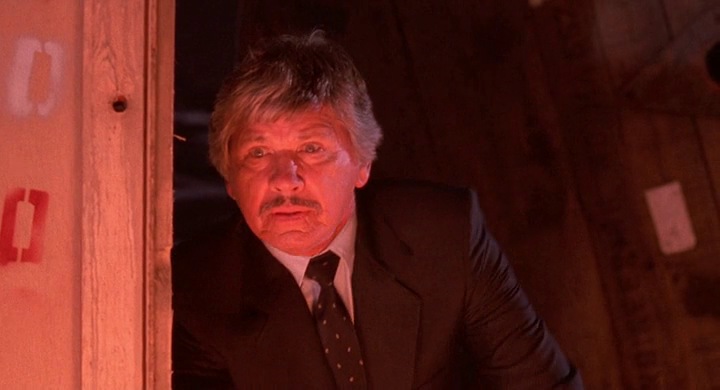 There’s enough fisticuffs and gunplay to satisfy fans of Bronson’s, but making a movie just like this today would not be possible.

Plot: Straddling the cultural divide between the East and West, Kinjite: Forbidden Subjects stars Charles Bronson (Messenger of Death) as Lt. Crowe, a coarsened Los Angeles cop whose objectivity is compromised when a case he’s investigating hits close to home.

Crowe will reexamine his prejudices when he forges a friendship with a Japanese businessman whose daughter he’s saved from a child prostitution ring. But an unexpected tragedy will lead the out-for-justice Crowe into uncharted waters as he pursues the murderous pimp known as Duke (Juan Fernández,Bulletproof) in the edge-of-your seat crime drama Kinjite: Forbidden Subjects.

Olive Blu-ray Review: “Who appointed you avenger of my department? Who gave you a flaming sword?”

The last of Charles Bronson’s features from Cannon, Kinjite is a shockingly kinky thriller that features the star as a racist detective named Crowe. When a horny Japanese businessman molests his daughter on a packed transit bus, Crowe doesn’t refrain from biting his tongue before spouting off to his partner (Perry Lopez) and his boss that he’ll have nothing to do with helping Asians in need of police assistance. When the very man who molested his daughter experiences a personal crisis when his own daughter is abducted by a low level exploiter of minors, Crowe’s chief assigns him the case. Not realizing that the Japanese man (James Pax who played Lightning in Big Trouble in Little China) is the pervert responsible for his daughter’s molestation, Crowe takes the case because it also connects to several other cases he’s on. In one scene, Bronson makes a pimp swallow his own Rolex!

Ultra sleazy and pulpy, but surprisingly multi-layered, Kinjite follows two storylines that intersect, and when Bronson’s character is revealed to be a racist, overprotective father / cop, the movie becomes more interesting because it’s easy to sympathize with him. There’s enough fisticuffs and gunplay to satisfy fans of Bronson’s, but making a movie just like this today would not be possible. Aside from 52 Pick-Up, this was Cannon’s sleaziest movie. Directed by J. Lee Thompson, who also made Firewalker with Chuck Norris and 10 to Midnight with Bronson, amongst others.

This being the golden age of seeing good, great, and not-so-great films from different eras that predated the digital home video revolution finally find their way to Blu-ray, Olive Films has just put out two of Bronson’s Cannon-age films: this one and Messenger of Death. Both films are welcome additions to any collector’s Blu-ray libraries (certainly mine), and while the discs don’t have any supplemental material, the transfers are far superior to the DVD’s released by MGM over a decade ago. Kinjite has a clear, crisp, and yet filmic warmth to it, and the sound in DTS is top quality. This is a must own.