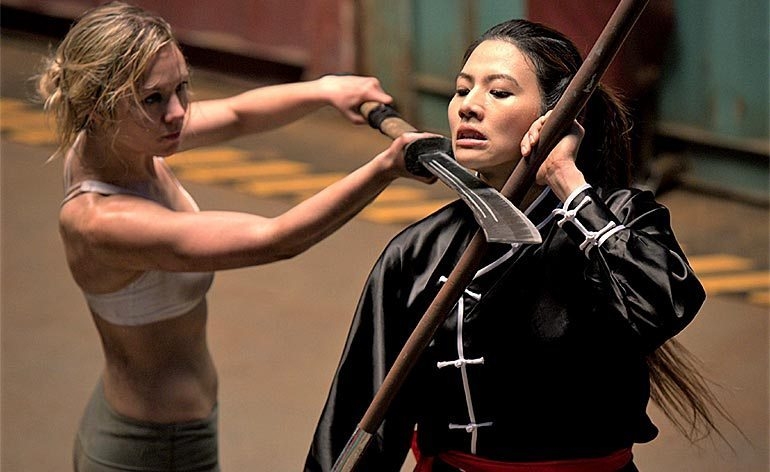 Lady Bloodfight is an entertaining addition to the fighting tournament genre and Amy Johnston deserves to be the next female action star.

Plot: a female fighter arrives to Hong Kong and is bushwhacked by a gang of local thugs. She’s then taken care of by a martial arts maestro so as to prepare the former for Kumite.

Review: Meet Jane. She’s a waitress, who is also a formidable martial artist. After getting tired of having to deal with her everyday life, she decides to turn her life around. Jane then decides to travel to Hong Kong, to enter a tournament known as the Kumite, which is supposed to be mysterious and enigmatic and it would be, if most action fans were not familiar with the traditions of Kumite since 1988. Her dad entered the Kumite years ago and never came back, hence making it personal for our heroine. And no, unfortunately, JCVD is not Amy Johnston’s father in this movie. That would have been badass. Having him show up for a cameo would have elevated this movie so much. Hell, this could have led to the creation of a new ‘Bloodsport’ franchise.

At any rate, Amy Johnston is not the only contender, since a bunch of other ladies come into town to participate. Jane is the odd fish here, being a blonde out of the Midwest. There is also a story of her mentor, Shu, and her rival by the name of Wai, who trains one of Jane’s co-competitors. All in all, ‘Lady Bloodfight’ is basically a bastardized sequel to ‘Bloodsport’ or a gender flipped remake if that’s more to your liking. If that is the case, then I have to say that ‘Lady Bloodfight’ is still a better reboot than ‘Ghostbusters’ (2016); admittedly most movies are better in comparison to the latest ‘Ghostbusters’, so take it for what it is.

Anyway, let’s get back to ‘Lady Bloodfight’. The movie was Amy Johnston’s first project as the lead actress. The movie was filmed in Hong Kong, produced by the well-known Bey Logan and directed by Chris Nahon, who is known for his work on other action movies, such as ‘Kiss of the Dragon’. The movie is very much similar to ‘Bloodsport’. The movie was originally meant to star Selina Lo, Maggie Q, Shu Qi and a bunch of other female martial artists, meaning we were close enough to a gender-flipped version of ‘The Expendables’, now that ‘The Expendabelles’ most likely will never be made.

Bey Logan and Judd Bloch, who co-wrote the script, sorta tried to make it more convoluted and have the main antagonist to be not one of the fighters, but a shady bookmaker, who is doing what he can so as to profit off the blood spilled during the Kumite.

Speaking of Jane’s opponents, aside from the street punk Ling they are not particularly interesting. Well, except for one of them. As a Russian myself, I can’t help but unconditionally love Mayling Ng as ‘Svietta’ – a Russian fighter straight out of prison with a nasty attitude and skills to back up her mean behaviour. Mayling is a black belt martial artist and fitness champion from Singapore, so she really is a formidable rival to Jane and their fight is the most brutal and entertaining one in the whole movie. Hence, once again, proving that if you have a scary, mean-spirited, constantly grinning Russian villain in your action movie, he – or she – will fit in just fine regardless of the exact plot or the circumstances. Russian villains are never out of place in action movies.

While Mayling’s action scenes are really well done, ‘Lady Bloodfight’ has an abundance of both decent fights and mediocre ones. They are gory, however and there are truly violent moments. The movie is not entirely devoid of good moments – Muriel Hofmann and Kathy Wu shine as Shu and Wai, rival maestros. The two have great on-screen chemistry and fighting skills to boot. The fact that Jane has to deal with racism and the absurd assumption that being American she will certainly fail the Kumite is a nice touch as well. Though, one can only assume that at some point the shady organization that was in charge of the Kumite in the 80s got replaced by this new one, otherwise, they surely would have remembered one Belgian dude winning the ch. But that’s just me being a smartass again.

In the end, while ‘Lady Bloodfight’ is neither a cult classic nor a hit, it is not a bad B-movie. It’s nothing special, but it gets the job done, especially if you have a couple of beers to keep you company whilst watching the movie. Moreover, Amy Johnston is cool and deserves a shot at being this generation’s female action star.